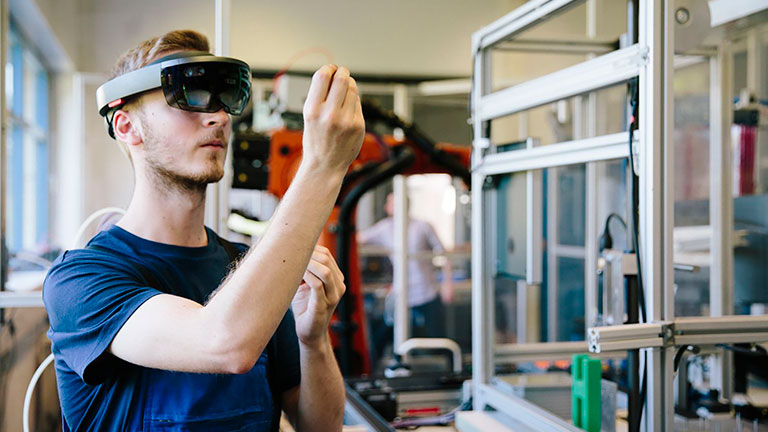 Philosophers and psychologists have long questioned the boundaries of reality and the difficulty of discerning reality from perception. Now digital technology offers many possibilities to extend those boundaries purposefully. Those possibilities range from the limited-purpose augmentation (or complementing) to the creation of virtual environments and “metaverses”.

Extended reality applications range from augmented reality (AR) to virtual reality (VR) and terms like mixed reality and immersive reality refer to combinations or variations of those. What differentiates VR is that it relies on purely computer-generated environments for the user to function in.

Fun applications of extended reality have received the most notice—with PokemonGO being the first such experience for many. Simple marketing and communications applications using QR codes are now very familiar. Enterprise applications ranging from equipment maintenance and troubleshooting to virtual training are also becoming common. Are these the tip of a large iceberg of reality extensions … or just examples of niche applications that will improve the efficiency of some activities and offer new entertain angles but not prove significantly transformative either socially or productively?

Three types of indications pointing to the potential of the iceberg below the applications that have already emerged—from forecasting, academic and corporate perspectives—provide insights into the speculative potential of extended reality applications.

A valiant 2019 analysis of the projected economic benefits from AR and VR applications by contends that they will be highly significant—adding almost 2% to global GDP by 2030. The benefits are expected to come from cost reductions and productivity increases in just about every industry and sector. They are also expected to be experienced in a wide range of countries.

Behind the analysis there are assumed adoption rates by country and, as the graph shows, the overall assumption is that this decade will see a massive ramp-up in the adoption of AR and VR applications. Initially the US is projected to see the fastest rates of adoption but by the second half of the decade many other major economies will be catching up—and even accelerating faster the adoption of extended reality applications. 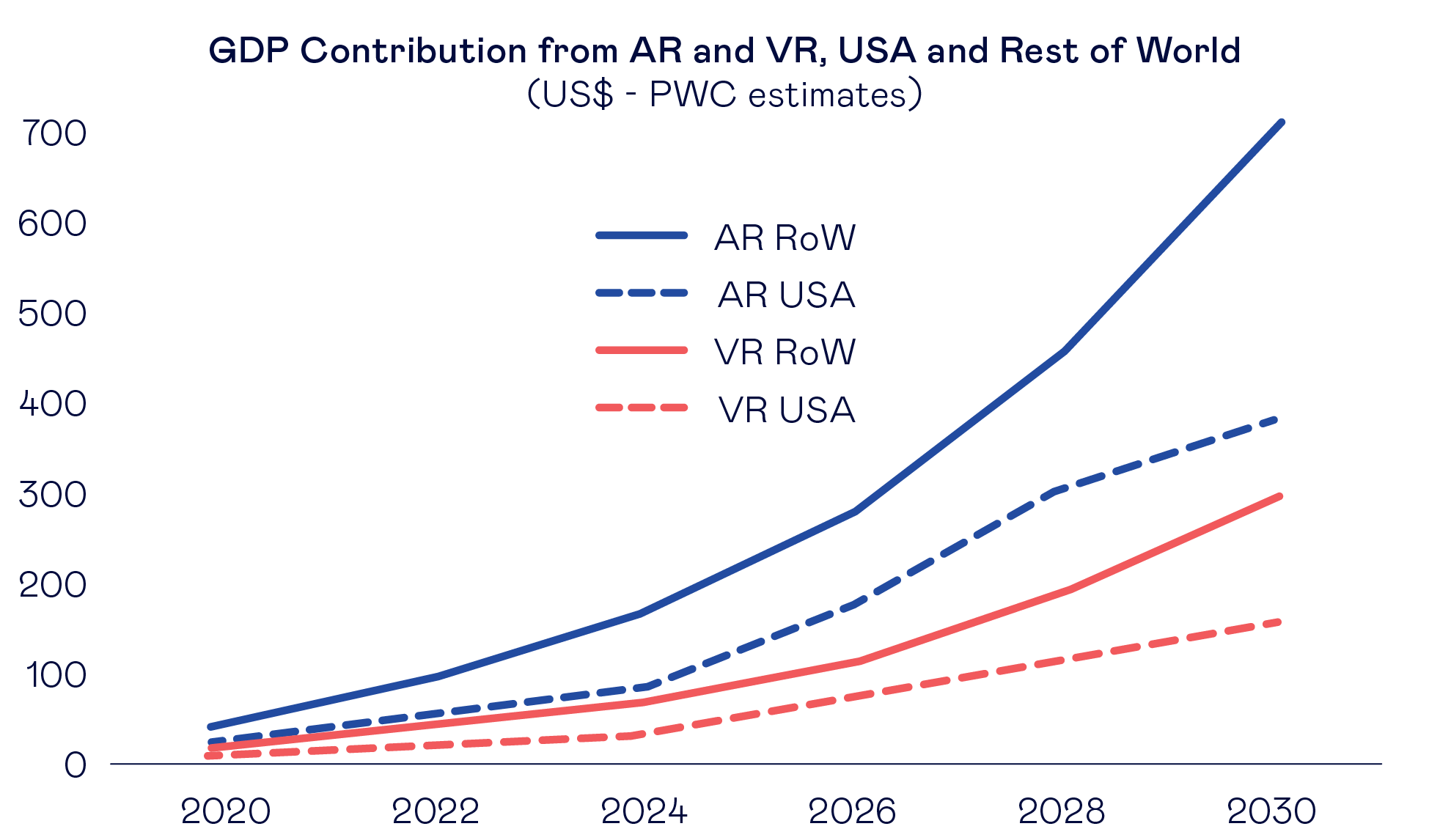 The forecast is particularly sanguine on the role of AR applications that, by the end of the decade, are seen as contributing over $1 trillion to global GDP—of which more than one third will take place in the US economy. The PWC analysis sees considerably less potential in pure VR applications—at least in this decade—with adoption rates tapering down in the US in the late 2020s but still increasing in the rest of the world. 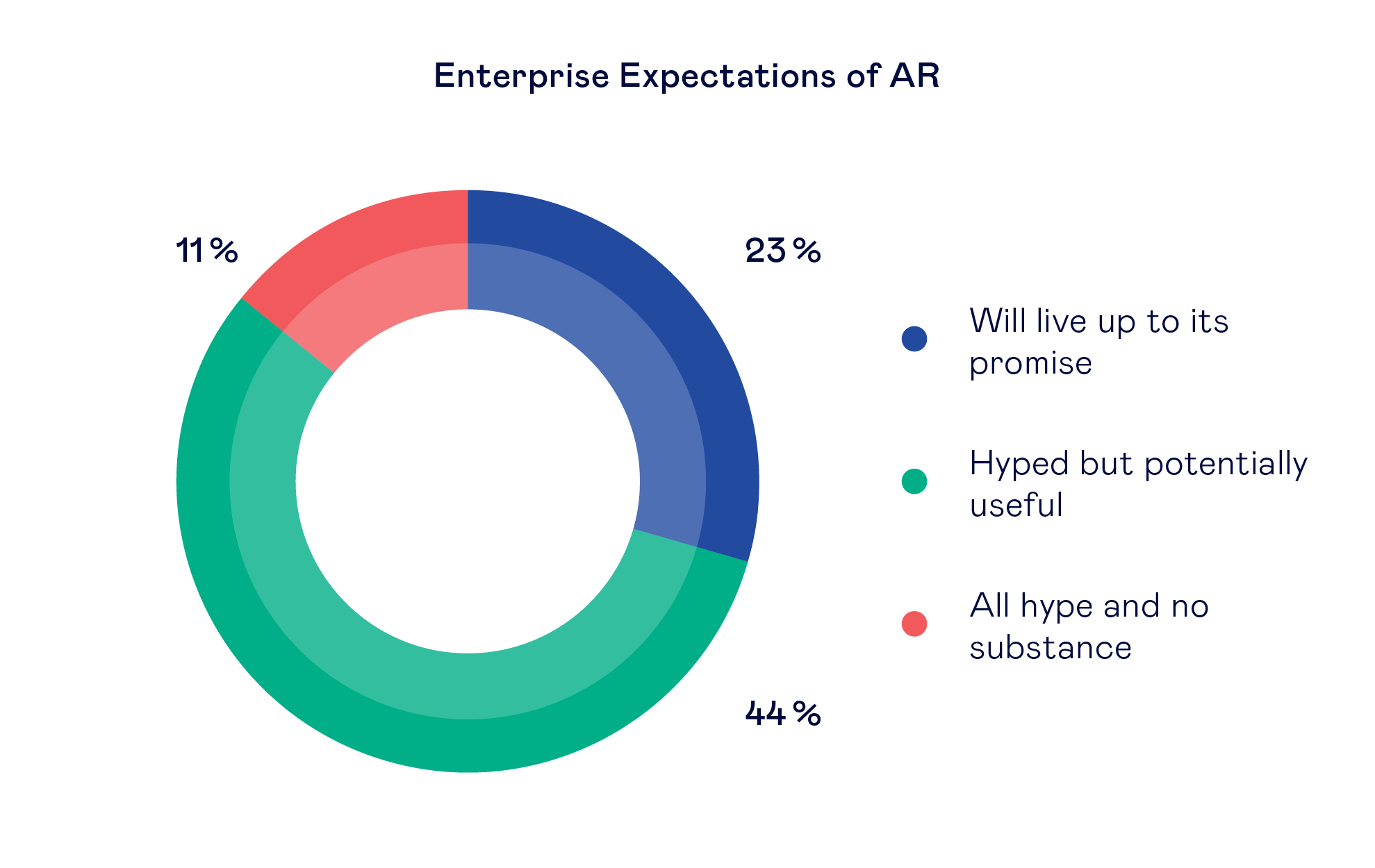 Enterprise surveys indicate greater skepticism. For instance, this chart (adapted from data in a GlobalData survey of B2B enterprises in Q2-2021) shows that less than a quarter of respondents with a view on AR were confident that it would live up to its promise. But, in practice, questions on AR’s potential could genuinely get very different answers because under the AR label there are many different uses. They range from small additions to more established digital applications that have already proven useful and cost-effective, as in the case of in-store experiences or fashion and decoration, to data-intensive overlays, as in the case of maintenance manuals or medical exploration and treatment selection.

One of the main reasons for most forecasts of market potential to emphasize AR over VR is the string of disappointments with VR hardware. Magic Leap, for instance, spent several billion dollars on the development of a VR headset that was supposed to become the core of a developer ecosystem aimed at consumers but could not get enough traction on either on sales to consumers or with developers. Many of the engineers working on that project have been hired away by larger companies and Magic Leap is focusing on more targeted enterprise solutions. Alphabet also had a disappointment with the GoogleGlass for consumers (now also being re-framed for enterprise solutions), and is back to playing to its software applications’ strength and downplaying the role of hardware—humorously even with a do-it-yourself cardboard viewer/headset.

Organizational and product development decisions by the largest corporations in the digital arena appear to also endorse the view that AR and VR have high-potential and are ripe for rapid adoption (though these deep-pocketed corporations have before invested in fruitless pursuits without much hesitation). Intriguingly, the labels they are using vary from company to company. For example:

Facebook bought Oculus in 2014 and its headsets have been a major driver of growth in the market, capturing two thirds of the fast-growing global VR headset shipments during the first quarter of 2021, for instance. Facebook is now poised to integrate VR hardware and software—trying to gain a strong first-mover advantage presence in the “metaverse” as part of its strategy to diversify revenue away from advertising and part of its vision of the next (“ultimate” they call it) phase of tech-social interaction for work and leisure.

Following behind Oculus—not closely yet but with the advantage of the Chinese market being closed to Facebook (as it is also for Google)—are DPVR and Pico that already have a strong base in China from which to expand globally with an initial focus on enterprise applications. Sony is another established player—building on its strong gaming customer base.

The question to keep an eye on is whether this finally represents a turning point for VR hardware and applications that had long seemed about to be more than just gaming devices, about to revolutionize fields like architecture, defense, medicine and more. Until now attention and investments have been justified on the basis of VR’s potential rather than its results. Tech-savvy magazine WIRED has noted that so far VR has given us slightly fancier games, but it has hardly been revolutionary, because non-VR games remain just as popular as they were before. Stay tuned to see if VR is going to be just like 3D movies and 3D television—a fun-but-expensive gimmick with limited useful applications—such as in training where VR has already proven that it can improve performance significantly—or become a key source of competitive advantage in many fields.

Concerning AR, the question is not whether it will become pervasive (we can expect that) but how significant—and, hence, determinant of competitive advantage—and how deeply embedded into what kinds of productive processes, products, and consumer experiences it will be. The answer for productive processes will vary depending on where AR applications remains a source of marginal improvements and where they produce step changes. For consumer markets the answer will probably have more to do with the attitudes of consumers to ever-increasing digitalization and user-friendliness of AR applications in mass markets than with the supply side (especially hardware).