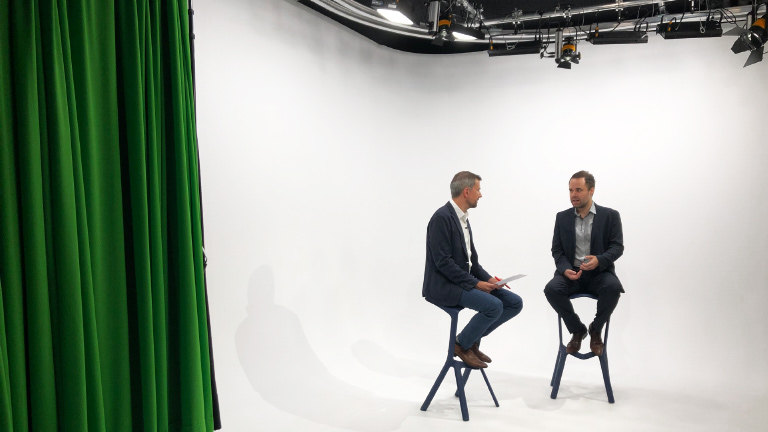 Podcast: What happens when artificial intelligence wins against humans?

Should we humans be hopeful or afraid of the swift advances of artificial intelligence? In this podcast, Esade Entrepreneurship Institute researcher and Assistant Professor George Chondrakis talks with senior research fellow at the Max Planck Institute Fabian Gaessler about the latest advances in artificial intelligence (AI) and its capacity to defeat human intelligence in complex tasks. The podcast also looks into how AI – when applied correctly – can help businesses around the world and the risks that it entails when used poorly in decision-making.

George Chondrakis: Hello everyone. I’m George Chondrakis from the Esade Entrepreneurship Institute and this is our first podcast on innovation. Artificial intelligence has been shown to compete with people for increasingly complex tasks. However, little is known about how AI can be complementary to labour. Interacting with AI can benefit human skill development.

In this podcast, we will examine how the emergence of chess computers in the 1980s affected the skill development of human chess players. Today we're very lucky to have with us Fabian Gaessler, senior research fellow from the Max Planck Institute. We're lucky to have him today present his work on artificial intelligence.

Most of us have heard a lot of things about artificial intelligence – it's one of those buzzwords every corporate boardroom talks about these days. But your research shows some interesting findings that can help us reflect on AI's impact on corporations and the economy more broadly. Your work implies that AI is not something new and it has been around for a while. Why has artificial intelligence all of a sudden become so prominent and why is there so much buzz around this term?

George Chondrakis: That's very interesting. Today you presented your work at our research seminar series and your research findings on chess players. What were you trying to understand in this study and what are some of the findings that seem to be applicable to corporations?

Fabian Gaessler: The idea here is that human interaction with artificial intelligence is a fairly new phenomenon in many aspects, especially when it comes to firms and commercial applications. However, if you think back, one of the very first devices where artificial intelligence was used in human interaction was chess computers, which have been around since the late 1970s. The interesting thing is that we can actually observe the effect of human chess players interacting, training with chess computers, on their performance when actually competing against other human players.

George Chondrakis: So essentially, this is sort of a little laboratory where workers or employees – if we try to think more broadly – can have a chance to actually use AI with the purpose of enhancing their skills. What did you find based on this setting?

Fabian Gaessler: In this setting, we argue that given the availability of chess computers, players had an opportunity to actually train to improve their chess skills with a teacher who never gets tired. What we actually found is indeed that chess players increased their performance. They got better, but more importantly, they also improved their chess skills faster – they learned quite faster compared to other chess players who at that time did not have the chance to train with chess computers.

Players who train with chess computers increase their performance and skills

What we also observe is that having the opportunity to experiment with new moves and strategies with a chess computer meant that you could try out new things without having others observing it, which eventually provided the opportunity to try out risky things and surprise your opponent with moves that you had actually studied a lot beforehand.

George Chondrakis: You focus on chess players and how well they perform in a very specific setting, but your results could have many implications for organisations, broadly speaking, and in particular for corporations. One of the themes that comes out is the extent to which AI is a complement versus a substitute of human capital. What can your results say more broadly about corporations?

Fabian Gaessler: In the last few years, we have seen this in the media even though it's a pattern that goes back to earlier automation and other labour replacing technologies. First of all, people think that they have to compete against those new emerging technologies. In this case, artificial intelligence. We have a more positive view and I agree that there are complementarities. And even beyond that, having AI not only supporting you in fulfilling the task, you can actually learn while working together with artificial intelligence.

George Chondrakis: This is quite a nice message to bring forward. What specific steps can corporations take when it comes to interacting with these artificial-intelligence-powered systems and what type of skills and processes should they put in place?

Fabian Gaessler: I think firms first have to really check its feasibility – what they can actually replace or where they can actually implement artificial intelligence. We have seen an astounding development in the last couple of years, but there are still cognitively demanding processes where a machine cannot replace or even help a human.

So first of all, firms really have to think hard about whether it’s feasible to have AI complementing or even replacing a certain task, a certain routine within the company. Given that many tasks, even if they appear routine to the outside, actually demand highly demanding cognitive skills that even nowadays AI cannot deliver. On the other hand, we have to understand that in our example of chess computers, the environment – even though games can be very complex – has only a limited number of parameters.

However, in real life, when it comes to firm decisions, the parameters are infinite. To really have AI working on this, it's not based on rules but rather on learning from earlier data from earlier experiences. Basically, AI nowadays relies a lot on training data. However, the quality of this training data is highly dependent on what you eventually get out of it. For instance, if you have training data that entails one bias that you are not aware of that may eventually become part of the AI and lead to decisions that you actually wanted to avoid but you now have them in an even more devastating way, in the sense that you cannot really tell what the machine determined.

George Chondrakis: Fabian, thank you very much for your interesting insights on a topic that really concerns a lot of people in businesses around the world today. Thank you for being with us.

Fabian Gaessler: Thank you. It was a pleasure.