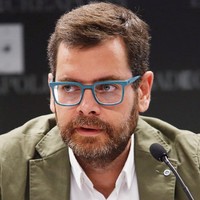 Oriol Alcoba is the director general of Esade Creapolis, Esade Business School’s business and knowledge park. Esade Creapolis is an open innovation ecosystem which provides a space and innovation consulting services to help companies to improve their competitive position. He is an academic collaborator at Esade and a lecturer at Pompeu Fabra University. He also serves as an external expert for the European Commission, consulting on and assessing policies and projects related to the social and economic impact of research, technology and innovation.

Until December 2016, he served as director of Transfer and Valuation at Eurecat, a multidisciplinary technological centre headquartered in Barcelona. Previously, he was the director of the Government of Catalonia’s Technology Transfer Area in the public agency, ACCIÓ. Until 2009, he served as Cluster Development director at 22@Barcelona, a public enterprise belonging to Barcelona City Hall and dedicated to developing and transforming the Poblenou neighbourhood into the city’s new “Innovation District”. Prior to this experience, he was head of service contracts at Fomento de Construcciones y Contratas (FCC). He began his professional career as an R&D expert at Universidad Politécnica de Cataluña (UPC).