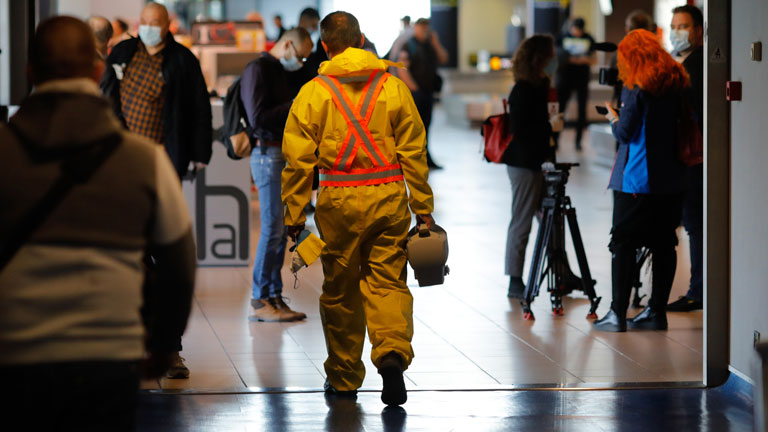 Labour-related measures in response to the pandemic: protecting workers

Though the Covid-19 crisis’ origin is health-related and, in principle, has nothing to do with companies’ economic situations, it is going to temporarily paralyse economic activity.

Furthermore, we do not know how long the social distancing and quarantine measures will be in place. Though essential to help to stop the spread of the virus, they will unavoidably reduce demand, especially for services in the hotel, restaurant, transportation, tourism and physical activity industries.

At the same time, other industries are already facing difficulties in terms of maintaining their production levels due to supply-related problems (companies whose employees cannot go to work or companies closing because they cannot guarantee their workers’ safety).

Without doubt, a large part of the country’s productive capacity will be affected one way or the other.

Logic would indicate that the pandemic’s negative impact will be temporary. However, this impact may have a long-lasting effect on both companies and workers.

Coordinated international response with significant and expansive fiscal measures and the appropriate monetary policy from the European Central Bank will avoid possible tensions in debt markets, a fundamental condition to ensure we have the financial muscle we need to overcome the immense challenges ahead.

That notwithstanding, every country has its own set of unique circumstances. In Spain, the measures announced by the Government through Royal Decree-Law 8/2020 to mobilise 200 billion euros and ensure that the health crisis does not affect the real economy are a move in the right direction.

However, this crisis has continued to evolve both quickly and continuously. To stay ahead of possible future threats, we propose several alternative measures focusing on one of the primary sources of risk for Spain: the exposure to external shocks amongst the weakest segments in the country’s job market.

Spain’s job market stands out for the high number of temporary contracts, consistently above the EU-28 average (around 10% over the last few years).

In addition, this area is precisely where companies tighten their belts when crises emerge. For example, the temporary job rate decreased in the first years of the 2008 crisis due to the mass destruction of temporary jobs. This is because these employees are entitled to lower compensation packages during recessionary periods or do not specifically have to be dismissed given that companies can simply choose to not renew their contracts.

With the economy’s recovery, however, the temporary job rate began to rise again until becoming one of the highest in the European Union as we forecast in a recent EsadeEcPol report. This elevated temporary job rate implies added fragility for the Spanish economy given today’s Covid-19 crisis.

However, we cannot attribute this Spanish anomaly solely to different production models: The temporary job rate in Spain is the highest in each and every industry, leaving a large number of workers exposed to the impact of crises such as the current one.

In addition, these temporary contracts primarily affect young people, women, immigrants and unskilled labourers (nearly 80% in Spain compared to 50% in the rest of Europe) who, for the most part, would voluntarily opt for other types of contracts.

This situation is made all the worse by the fact that a high percentage of these temporary contracts span less than 6 months: 56.3% amongst those who know how long their contract lasts.

In addition, the combination of temporary job contracts and part-time work schedules implies that only 55% of workers (approximately 11 million of the nearly 20 million employed individuals) are considered full-time salaried employees with an indefinite contract. To make matters worse, the number of self-employed workers in our country is growing: nearly 16% of all those employed.

Finally, the possibility of working remotely, a practice that would help to buffer the pandemic’s impact on some industries, is scant in our country. For example, according to a 2018 Eurobarometer report on the work-life balance, only 10% of workers in Spain can take advantage of this option. This includes those who indicate that they do not have the flexibility and means needed to telework and those for whom working remotely is not a common practice (if at all), despite having the means to do so.

In addition, the possibility of working remotely is extremely skewed depending on the workers’ level of education: Amongst those who abandoned their studies before the age of 16, 7.2% responded that they worked remotely, compared to 10.5% of those who finished their studies after turning 20.

Given the above, we propose a series of specific and urgent measures for different types of workers: self-employed workers, those with temporary job contracts and those with indefinite contracts.

We believe that, in the current situation, this approach is beneficial – complex measures or too many requirements would slow down their implementation. Given the nature of this crisis, we need to make sure that resources reach vulnerable workers as quickly as possible.

On the one hand, postponing the monthly self-employed worker Social-Security quotas throughout this state of emergency would be worthwhile. On the other, self-employed workers whose income falls below a given threshold should be exempt from paying the minimum monthly quotas.

Depending on the scenario, the cost of this measure would range from 93 to 187 million euros per month.

Source: EsadeEcPol, based on data from the Spanish Ministry of Labour and Social Economy.

Workers with temporary contracts could possibly face one of two situations: on the one hand, their contracts are not renewed or they are dismissed, and, on the other, their companies implement a temporary labour force adjustment plan (ERTE in Spanish).

The estimated cost of paying unemployment benefits to workers in this category would vary depending on three scenarios (optimistic, intermediate and pessimistic) in terms of different job destruction rates (10%, 25% and 40%, respectively) amongst this group of workers: total estimated costs would vary from 105 to 420 million euros per month.

In this case, we can assume that the group potentially affected by labour force adjustment plans includes workers with contracts lasting more than 6 months. According to the Spanish Labour Force Survey (EPA), this would currently imply 1.96 million workers. As in the above cases, we explore various scenarios to calculate the public coverage of a part of their salaries based on the following two variables:

The associated cost would range from 68 to 409 million euros per month.

Lastly, for workers with indefinite contracts, we propose the State provide a percentage of their salaries while any labour force adjustment plans remain in place. This should be applied in especially vulnerable industries (for example, those affected the most or in which a higher number of jobs are destroyed), just as the Danish Government has already announced.

Once more, we contemplate three job destruction scenarios and four levels of coverage. That notwithstanding, in this case, we have to bear in mind the variety of industries affected:

In the intermediate scenario in which salaries for temporary and indefinite workers affected by labour force adjustment plans would be covered up to the minimum inter-professional salary (SMI), the total cost would represent 1.9 billion euros every month.

Similarly, the number of affected workers would range from 1.7 million workers in the optimistic scenario to nearly 3.6 million in the pessimistic case. In the intermediate scenario, this figure would total 2.7 million workers.

These measures will most likely need to be complemented with other actions if the economic situation worsens. In particular, we believe it is essential to support those workers – whether they have been laid off or are self-employed and have seen their activity drop – that don't have other income sources, or have to sustain their family.

Given the uncertainty regarding the duration of the current crisis and, consequently, the time the Spanish population will remain quarantined, it is paramount the Government define an action plan should this state of emergency endure.

For this, many of the activities whose demand has fallen will have to be refocused towards other areas where demand may increase. In other words, the Government should facilitate the flexible reassignment of employees from the most affected activity areas (hotels and restaurants, tourism, transportation, automobiles, entertainment, shopping malls, etc.) to other areas where demand has increased or may potentially do so (distribution, supply, online services such as education and e-commerce, food and beverages, health, communications media, etc.).

In particular, and as occurred in China, sales channels based on traditional brick and mortar stores and establishments will have to shift towards home delivery models. The following measures will be required for this: