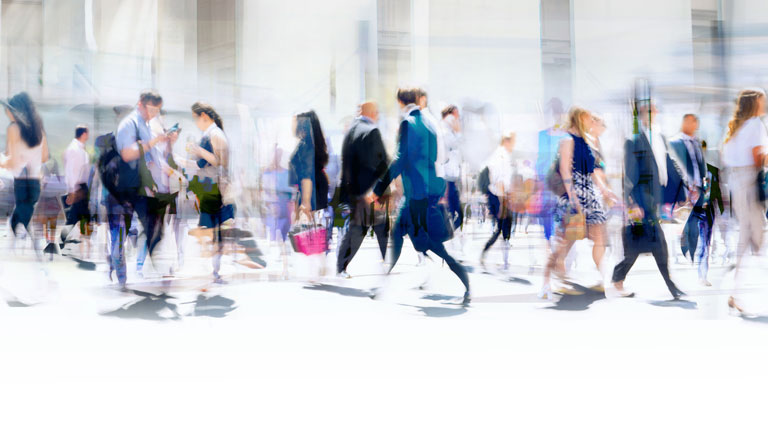 Major changes in demographic dynamics in recent decades have resulted in an unprecedented imbalance of demographic structures in different parts of the world with lasting implications for socio-economic policy choices and for markets of all kinds.

Several decades ago, there was a large gap in terms of population growth between high income countries (growing at around 1 percent annually) and developing regions (growing at well above 2 percent annually). That gap has been reduced steadily – even as population growth slowed in high-income countries – even faster than the gap in per capita income levels has been reduced. The drop was steepest in East Asia where factors included China one-child policy but has also happened in other regions—with the notable exception of Sub-Saharan Africa where annual population growth remains well above 2 percent. 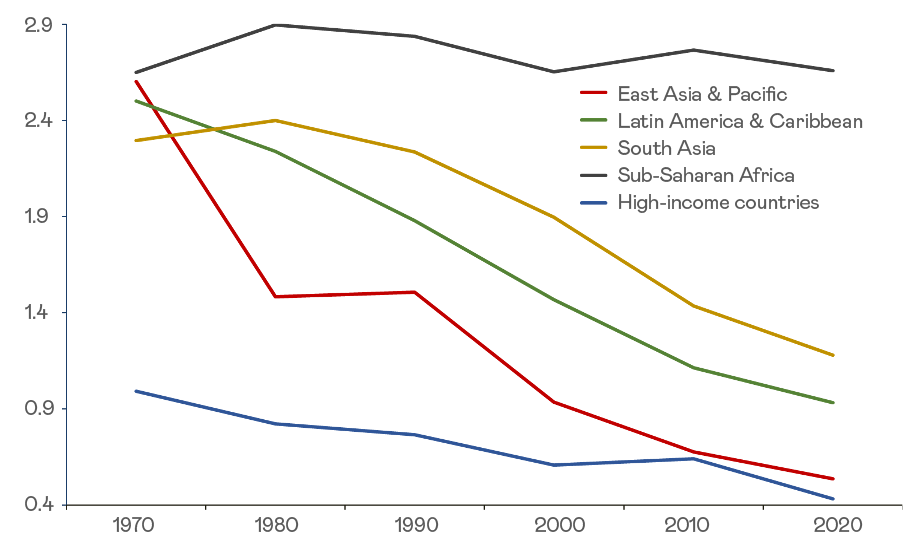 The cumulative effect of the different rates and generalised slowing down of population growth has been to render obsolete in many parts of the traditional “population pyramid” by generating sharply different population structures around the world.

The continuum of disparities is clearly illustrated by the extreme cases of Western Europe and Sub-Saharan Africa. The latter – and to a lesser extent also a few countries in South Asia and North Africa – still has well-defined population pyramid while the former has quite a top-heavy structure—as now do many countries in the world.

These very different structures highlight the very different demographic situations to be found around the world. At one end of the spectrum there are countries with very young populations (the median age in Ethiopia and Tanzania, for instance, is 18) and at the other end are countries with old population (the median age in Germany and Japan, for instance, is 47). The challenges that young and old population structures present – now and into the future – deserve separate attention beyond the focus of this note.

Demographic growth in the medium term is reasonably predictable (the standard source is the UN’s population projections) and the prospects for the next decade amount to further demographic polarisation.

Economic growth is less predictable but based on IMF estimates for the next four years we can expect high-income countries to account for one-third of the global GDP increase in real terms, emerging countries in Asia (mostly middle-income and upper-middle income) to account for almost half and Sub-Saharan Africa to account for less than 3 percent.

The prospective disparities between population and economic growth are not just an African matter—though they are greatest there. Looking at recent performance and prospective post-pandemic estimates suggests that high population growth countries should not be expected to grow significantly faster than other countries—however desirable that might be.

The net effect is that per capita incomes in high-population growth, low-income countries cannot be automatically expected to reduce the gap with higher income countries contrary to the more optimistic picture painted by GDP growth rates. Per capita incomes in countries where one and a half billion people live (growing to two billion by the end of the decade) are not catching up with world averages and will represent a global challenge as well as suggest a further polarisation of income segmentation across countries.

Generally, demographics are among the most predictable trends (exceptionably so). But this predictability affects mainly the biological aspect of demographics – where will how many people be born in coming years – and maybe also where they will live initially and, hence, what the impact will be on population structures across countries.

Over the longer term even this predictability could be shaken up (as it has been in recent decades) by behavioural changes affecting fertility in high (and low?) population growth countries. Other factors also generate significant uncertainty over demographic trends. For instance:

Overall, these demographic and economic dynamics underscore the obsolescence of the entrenched early-21st century notion of a two-speed global economy and the implied need for global corporations to have parallel strategies for advanced and emerging markets.

The situation on high-income countries is well-known—with ageing populations shaping consumption and savings patterns. Middle-income countries will bear watching as many will see steady both increasing per capita incomes and median population ages, meaning that consumer markets there will be evolving (maturing) rapidly. Finally, low-income countries with high population growth will require affordability-appropriate marketing strategies but will also have large pools of young people that might create investment and cost-advantageous supply opportunities for goods and, especially in the digital age, for producing services that can be offered remotely.