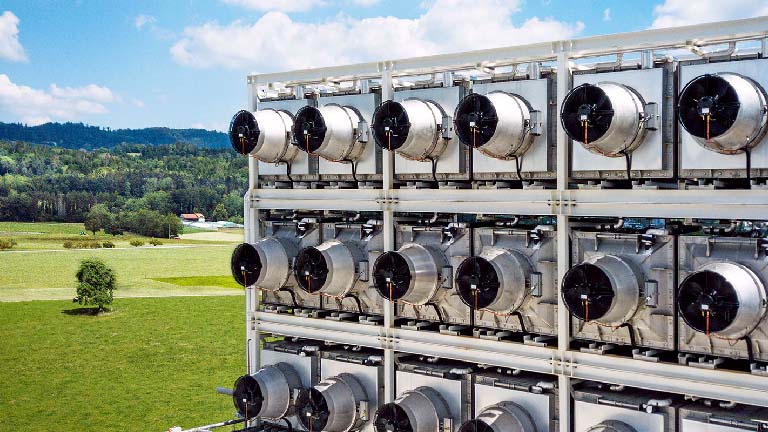 DAC involves using large-scale fans to suck in ambient air, which is then passed through a liquid solvent or solid sorbent to separate CO2, in a concentrated form, from other gases. The resulting captured CO2 can either be used directly (for example, in the beverage industry or to produce synthetic aggregates or synfuels) or stored geologically [1].

The opportunity: Which sectors can this technology help to decarbonise?

Given that DAC removes CO2 from ambient air, it is not a sector-specific technology. Rather, it is a complementary technology that may contribute to the pursuit of carbon neutrality, or even generate net negative emissions through permanent CO2 removal (storage).

In order to achieve the temperature goals of the Paris Agreement, net zero emissions targets are starting to appear around the world (Darby, 2019), for example by 2050 in the EU. Reaching these targets will require rapid decarbonisation in all sectors. Nevertheless, it is likely that some emissions may remain (in hard-to-abate sectors, for example), and in these cases, DAC provides an option to cover the final mile.

In addition, the longer it takes to decarbonise the global economy, the more likely it becomes that DAC and other negative emissions technologies (both in the biosphere and the geosphere) will be necessary to diminish the stock of already emitted CO2 in the atmosphere [2] (Friedmann, 2020).

The reality: What stage of development and deployment is the technology currently at?

Both liquid and solid DAC currently stand at a technology readiness level 6, with full prototypes at scale in operation (IEA, 2020). As of 2020 there are three companies running some 15 plants in Europe, the US and Canada (Budinis, 2020).

If, as multiple authoritative studies have suggested (McQueen et al., 2020), large-scale carbon removal will be necessary to reach global climate goals, DAC will need "to be demonstrated at scale, sooner rather than later, to reduce uncertainties regarding future deployment potential and costs" (IEA, 2020).

The hurdles: What are the major obstacles/challenges preventing further uptake?

DAC is currently still an expensive technology. One of the main reasons is the source of the captured emissions: in working with ambient air rather than directly at the point of emissions (e.g. a factory stack), the concentration of CO2 is far lower, which makes separating the CO2 out more energy intensive. In addition, if the captured CO2 is to be stored geologically rather than used directly, this increases operational and capital costs further, due to the compressor and energy needed for injection (Budinis, 2020).

Estimates of capture costs range widely, from USD 100/ton to USD 1000/ton (Budinis, 2020); however cost estimates have been declining rapidly [3]. In general, the cost of the DAC is likely to vary as a function of deployment. At this stage, demonstrating the technology at scale (Budinis, 2000) and generating markets for DAC as well as its captured CO2 will be critical. Policies such as standard-setting, investments in innovation and carbon pricing, among others, can play a large role in this phase (Friedmann, 2020).

Esade is committed to producing research and knowledge to the highest standards of academic independence and rigour. All content, views, and positions in this paper are the sole responsibility of its authors and do not imply endorsement by Fundación Esade or any of its funders.

[1] Less developed methods of DAC are also under study and development, including the use of membranes to catch carbon from seawater and cryogenics to separate CO2 from the air respectively (Sandalow et al., 2018).

[2] This stock is sometimes called “legacy CO2”. Due to the global warming potential and atmospheric lifetime of CO2, these stocks will continue heating the atmosphere for centuries once emitted.

[3] Whereas a range of USD 673-1172/ton range was projected in the past, the first commercial-scale plant is currently estimated in the range of USD 124-325/ton (Larsen et al., 2019). In the liquid solvent pathway, Carbon Engineering is currently projecting costs of USD 92-150/ton; while in solid sorbent pathways, Climeworks estimates it can reach USD 200/ton in five years and Global Thermostat projects $150/ton (Friedmann, 2020).