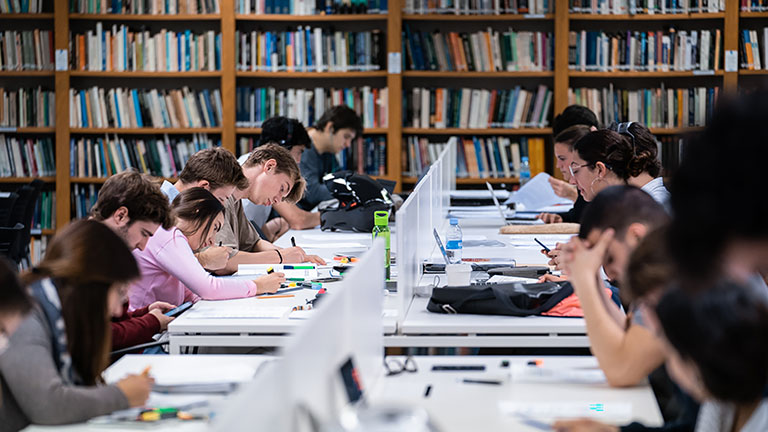 Do Better: Do you think that many people, young people, think of starting a business as their career path when they finish university?

Jan Brinckmann: In general, entrepreneurship as a phenomenon has been growing massively overall and has become way more attractive. Historically, people had more limited or more classical jobs that they held more or less for life. And now the world is very dynamic. You have lots of freelancing going on, part-time work, lots of transitions. All of those really help this whole, kind of, almost entrepreneurial life structure, where it’s more independent, more self-directed, quicker, more job experiences in parallel.

If I look at the dynamic, for example, at Esade over the years, what you can clearly see is that the interest in entrepreneurship has increased a lot. It was always high, but now it’s very, very high. But that has to do, as well, with our perception in the market, our branding. People specifically come to Esade because they have a special interest in, let’s say, innovation, entrepreneurship.

Do Better: And do you think that universities are adapting to this change, the way of understanding a work career? Or do you think that they are still very focused on steady jobs, for a long time, more like classical jobs?

Jan Brinckmann: Overall, the educational space is definitely evolving. There are new forms of education. There are these online learning formats and digital. So, overall, the ecosystem is evolving and all quite rapidly.

But in general, I believe that there are a lot of misconceptions about what education really is. Many people try to reduce it to learning facts for a job but this is basically preparing very productive chickens to lay eggs and is definitely not the main goal of education. It’s really about the development of the human, about creating experiences, learning experiences that help the development of the person in many ways. Obviously, one core dimension is the professional dimension, but it goes way beyond that.

MOOCs, for example, and other more digital learning formats, oftentimes approach education like “Okay, a person wants to learn certain ‘how to’ knowledge to leverage and we figure out what’s the most effective, the quickest way to get people to learn exactly that specific knowledge”. In certain use cases, if you work in a special function and you have exactly that question, that is relevant. But, if you’re really thinking about, “How can I develop as a person through life?”, it’s not about very quickly getting this chicken food and knowing about…

Do Better: It’s about learning how to think, right?

Jan Brinckmann: Yeah, learning how to think, how to question, reflect… It’s about understanding yourself, finding out what you personally like, what you don’t like, what you want to be like from an identity point of view, all of which are very important. So, social processes are very important because that’s where you observe yourself in social interactions with others, and you see how others behave. That is extremely important, and all of that, to me, is a much more important and much more powerful learning experience.

People think that entrepreneurship education is, “Ahh, you’re basically teaching how to lay eggs or how to create formal companies that hopefully have better chances than the average to be successful” or whatever that is. And I think that is a misconception. Entrepreneurship education is much broader than that. I’d say that my personal definition of entrepreneurship is your personal declaration of independence. So, that’s basically a state of mind that you have as an individual and, as well, the capabilities and the knowledge and facts that you have to live an individual independent life, right? So, this framing is, I think, much broader, much more centered on the human.

Do Better: So, if you had to define very briefly what entrepreneurship education is for you, what the core elements are, what the skills you have to have as an entrepreneur and the things that universities teach students that want to be entrepreneurs at some point, what would you say?

Jan Brinckmann: To me, entrepreneurship education is a multidimensional phenomenon that goes beyond learning ‘how to’ knowledge. It is personal development because it has to have mindset development. Maybe see the world more as opportunities, because some people might think there aren’t many. It’s this development to really shape this positive, proactive mindset as well as develop more urgency to actually act, because many people, especially in university settings, tend to have more of an academic view, thinking everything through for a very long time, kind of ‘analysis paralysis’. This mindset that, in the end, it’s not really about perfection always; it’s about getting things done and getting started.

It’s all of this, plus seeing that there could be value in having independence and a self-directed life and not just following what other people say. But then, as well, there’s this additional dimension which could be, for example, “How do I have to understand business, maybe not in a classical business school sense, but really with a different take on it, from an entrepreneurship point of view. And then, there are questions, as well. It’s basically a step-by-step approach, all kinds of ‘how to’ knowledge or “how do I find my co-founders?”; “how do I get the first customers?”; “how do I finance my ventures?” and “how do I get this ‘how to’ knowledge?” So, you see, it would be like a whole, like a bouquet of flowers that if you saw all that…

Jan Brinckmann: You could think of it as human action or entrepreneurial action, that has three core ingredients: one would be the desire to want to do it, right? That you really want to create something. And that one, actually, many people think cannot be taught, but we actually see, for instance, that you can influence it quite a lot by having lots of examples of other founders, of having your peers wanting to create something

The second element would be that you can actually do it, right? And this perception is very, very important and one I think you can influence in two areas. One is to not over-complicate founding, to really reduce it to the core thing and, as well, make people aware that you don’t have to know everything. And basically then, in very simple terms, showing how stuff can actually get done and showing very powerful tools for how to do things.

And then, the third element is the situational trigger. One thing is, in general, to want to do something and think, “Hey, I could do it”, but then oftentimes we have ‘couch entrepreneurs’ who say, “Yeah, I want to be an entrepreneur and I know basically now after the class and this session, how to do it”, but they never get started. So, I think creating these situational triggers, and there, founder meetups could be one, all kinds of immersion tools, all kinds of project work.

Those are the three elements that we influence, and a lot of it is just, as well, getting people together, inspiring people and, the classical avenue, having lots of founders there, the meetups, the one-on-ones, lots of formats, you have mentors. Basically, the thing we want is for nobody to have an excuse to say, “Hey, I cannot do it because I don’t know how.”

Do Better: And what things do you think could be done to improve entrepreneurship education?

Jan Brinckmann: There are a few quite immediate ones. So, one is everything around focused areas in entrepreneurship. For example, one core thing is technology entrepreneurship, as a lot of the high-growth entrepreneurship that’s really powering full employment in economies is oftentimes very tech-driven and there’s still a really big disconnect between what business schools or universities, in general, and what’s happening in engineering schools or in research institutions.

Do Better: So, before you were talking about the fact that many people who start a business are engineers. So, do you think that these people are more likely to start their companies?

Jan Brinckmann: The good news is that entrepreneurship, just like life, is an extremely diverse phenomenon. So, it’s not like only more or only tech people can create exciting companies. I’m not a strong believer in ‘hero entrepreneurs’, as such. But typically, what you have is a really strong team that you want to build and you try to get people who are really strong in each of these positions. Typically, there is indeed one that plays more of an engineering role, which would be more, let’s say, if it’s a software company, writing software code.

But, as well, any of these ventures need a person who has more of a business sense, a business drive, who loves to interact with customers. Or the product person who is more holistic, that can understand both worlds. So, I think really exciting projects typically have these different people involved.

Do Better: You were also referring to the fact that many students first prefer to work in an exciting company and then start their own business. Do you recommend that to them or do you think that you can start a business once you graduate?

Jan Brinckmann: You can, for sure. There are many examples but what is the best way? I think there is a more likely way, and that is that you work first in another company. It’s just that people feel more comfortable. It’s almost like riding a bicycle. You want to maybe sit on the bike and try it out a bit before completely letting go and running off by yourself. So, it’s good to have that initial support system just to get started. But, as well, it all depends. If you’re doing a project and you’re super excited about it and it’s your thing, don’t wait and say “I need more training”, okay? At times, then, just go for it and you can figure the rest out in the process.