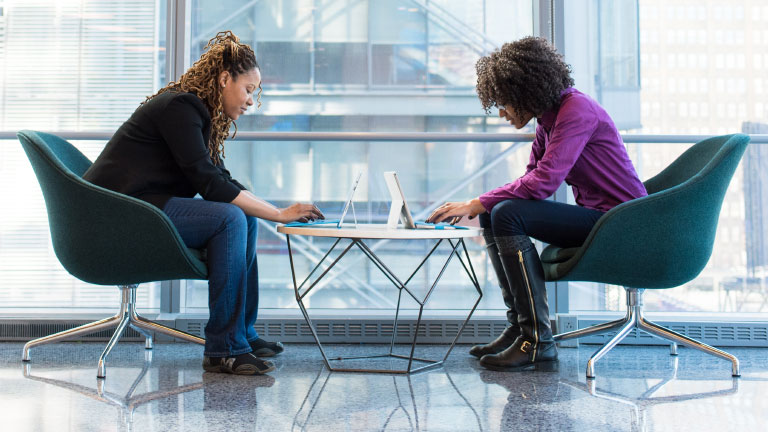 Podcast: Is it harder for women to succeed in the world of entrepreneurship?

Podcast: Is it harder for women to succeed in the world of e...

December 2019
Update Required To play the media you will need to either update your browser to a recent version or update your Flash plugin.

In this podcast episode, Lisa Hehenberger, Assistant Professor and Director of the Esade Entrepreneurship Institute, discusses the challenges female entrepreneurs face with Caroline Essers, Associate Professor of Entrepreneurship and Leadership at Nijmegen School of Management.

Lisa Hehenberger: I'm very honoured to have with us Dr. Caroline Essers, an Associate Professor at Nijmegen School of Management. Thank you very much for being here today.

Caroline Essers: Thank you very much for having me.

Lisa Hehenberger: First of all, I would like to understand why you feel it’s important to rethink the concept of entrepreneurship from a critical perspective.

Caroline Essers: I think it’s very important to look at the concept of entrepreneurship in a critical way because handbooks and popular magazines tend to conceptualise it as something that is always beneficial and we should strive to attain and stimulate it. But what if we have been looking at it in the wrong way? What are the conditions under which entrepreneurship should occur? In what context should it take place?

We often think of entrepreneurship in terms of the bigger the better, the more growth the better, instead of in other terms, such as sustainability, which today is equally important, or perhaps even more so. Besides this aspect, entrepreneurship is also highly gendered. This biased view is emphasised by a traditional Christian discourse that is far from neutral and which has an impact on people that don’t fall into these traditional categorisations. I think this is a very short answer to a very large and important problem.

Lisa Hehenberger: Could you give us examples of how this could have an effect on entrepreneurs?

Caroline Essers: Starting with the discourse, it is often very hegemonic and influential. If people hear a story over and over again, they tend to believe in it, so it creates a truth effect. The media and the news tend to portray only role models of successful entrepreneurs that are white, middle-aged, middle-class men. For instance, there are many programmes on TV, such as The Apprentice, that follow this pattern.

In popular magazines, you hardly see women entrepreneurs being portrayed as successful businesspeople

President Trump, who was a very popular entrepreneur, used to play a big role on the American version of The Apprentice, but we also have other examples, such as Alan Sugar in the UK. My point is they are both white male, middle-aged entrepreneurs. In these shows, and also in popular magazines, you hardly see women entrepreneurs being portrayed as successful businesspeople, let alone women with a minority background, or Muslim female entrepreneurs.

This perception causes people to believe that they cannot attain what the literature calls the “sublime object of entrepreneurship,” because it’s too difficult, or they think they need to belong to a certain group, have a certain background, or fulfil a certain picture. This is giving rise to a very exclusionary practice. The discourse for these people is that they have to adjust, they have to change. They have to go through training programmes, get a mentor... They can't just be themselves to be successful entrepreneurs.

Lisa Hehenberger: They have to somehow copy or mimic this sort of white male stereotype.

Caroline Essers: Exactly. This is one of the topics that I discussed this morning in your research seminar programme. These topics, which are related to post colonialism and post-colonial feminism, show the types of coping strategies these women with migrant backgrounds apply to get acceptance from the audience to be entrepreneurs.

Lisa Hehenberger: I guess investors may also be influenced by these stereotypes. Does this mean that those entrepreneurs who don’t fit into these traditional categories find it more difficult to gain access to financing when setting up their businesses?

Caroline Essers: Yes. This has been shown by many different researchers, and also in my own research. Women have voiced that they have to work harder on their business plans to prove their legitimacy as entrepreneurs. In research interviews I conducted with bank loan officers and policymakers, they said that they sometimes found it difficult to believe these women and to take them seriously as entrepreneurs. This perception, for instance, also resulted in their being offered lower loans. Not only do these women have to prove more, they also have to struggle more to secure loans as compared to their male counterparts.

Lisa Hehenberger: You also study not just female, but also migrant entrepreneurs. What kind of biases have you found in this area of your research?

Caroline Essers: These women are not only women; they are also Turkish or Moroccan, in the case of my study. They are entrepreneurs, but also Muslim at the same time. This is where the concept of intersectionality comes in: the simultaneity of these categories makes it much more difficult for these women to become entrepreneurs and earn acceptance from their audiences and different communities, including their own ethnic community.

Entrepreneurship in itself is quite gendered; it has a highly masculine connotation to it. But entrepreneurship is also very gendered in its own communities. Women are assigned to more household roles, so for them to transgress this public divide and take a public role as female entrepreneurs is quite difficult. It is not always accepted, desired or appreciated, and not only by their male counterparts, but also by their female counterparts.

My research shows that it’s not only the men in these communities who withhold and make these female entrepreneurs’ lives difficult, but sometimes the mothers or sisters also have a stake in maintaining a certain status quo.

Lisa Hehenberger: As you mentioned before, some of these female entrepreneurs are attempting to mimic what their male counterparts are doing. I think there should also be ways for the more traditional entrepreneurs to learn from these different types of entrepreneurs who are actually doing really great work. Could you tell us about the strategies that are used in this type of entrepreneurship you study that others could learn from?

Caroline Essers: I think it's very important for local and national governments to be aware of the fact that these women are there, and that they shouldn’t be stigmatised. They are extremely important role models for their communities, not only for other women but also for men, and their sons and daughters, who can look up to them.

It’s very important for society and governments to be aware of the crucial role these women play. They can really make a difference – they are agents of change. It would be important that, to some extent, governments support these women with funding to help stimulate and set up their businesses, as well as provide them with more access to mainstream entrepreneurial networks. This type of support at the outset would help female entrepreneurs to recognise and legitimise their role in our society.

And last but not least, it’s our job as scholars and scientists to write about this topic, not only in academic journals, but also in the popular media to help spread the message. Because I believe it’s also our responsibility as scholars to share our insights about these women’s very important social and economic roles.

Lisa Hehenberger: I think that you have definitely touched upon the impact that these women are having beyond just setting up a business, but also being role models and agents of change and, in some way, agents of their own change.

Caroline Essers: Exactly. I'm very glad to also be part of this podcast because this is also a wonderful way to share this information with others.

Lisa Hehenberger: Thank you so much for sharing this and being here at Esade with us today.

Caroline Essers: Thank you very much as well.