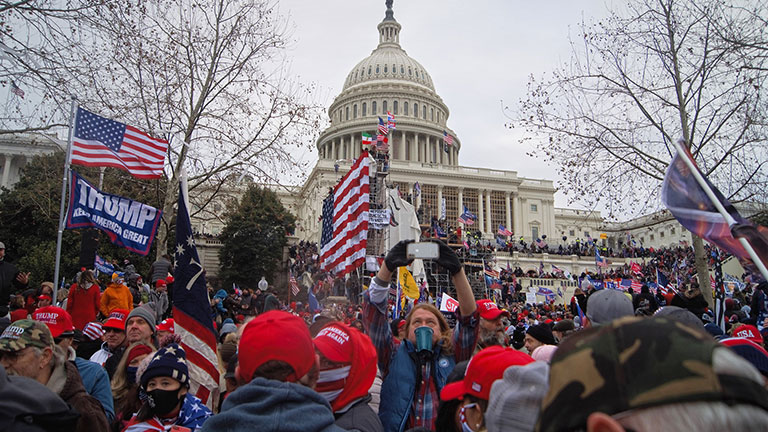 The first anniversary of the US Capitol assault has just passed, a year since that infamous day in recent US history.

In light of that day’s events, we would do well to reflect on the future of liberal democracies. However, before signaling the threats from authoritarian and illiberal regimes, democratic countries should first examine their own internal weaknesses.

I can observe three large gaps which I refer to as the three “Gs” in today’s democratic crisis, specifically: Gender, geography and generation. To these we have to consider another transversal idea, that is, the “battle for the facts” to which Maria Ressa, the journalist and 2021 Nobel Peace Prize, so aptly refers. Let’s examine these gaps.

Significant advances have been made in the last twenty years. Now, however, we have to broaden the focus and consider that individual identities, the way we are and perceive ourselves, are a part of the political conversation.

Protecting identities includes ensuring the right to be different in the public realm and to be recognized as a citizen. We have to promote public policies that enable all of us to be present in the real and digital public arenas, exercise the right to vote, lead social initiatives and ensure balanced representation in our public institutions. A democracy for White, university-educated men with good jobs represents a very poor vision of today’s world.

The second “G” refers to geography. Inequality between territories is growing: There are first and second-order cities and differences between urban centers and rural areas. The concentration of goods and services creates economies of scale (jobs, wages and political representation) as well as relational inequalities (access to education and culture).

If we don’t adopt countermeasures, this territorialization of inequality will affect our infrastructures (mobility, education, hospitals, water and waste removal), the effective organization of last-mile power (social solidarity networks or mafias) and electoral behavior (populist and anti-globalization votes).

Demographics, urban geography and social cohesion, three pillars of the political economy that merit attention in parliaments and congresses, all converge in this challenge.

The third “G” refers to the generation gap. Young people are entering the job market later and in worse conditions, delaying both their social and affective maturity. Their disaffection with the democratic system is growing given that it doesn’t provide them solutions to their immediate problems.

At the other extreme, digitalization is leaving older populations behind, since they can’t or don’t know how to navigate in this new setting. Without digital competencies, they depend on their children to carry out the most basic tasks (banking, groceries and healthcare).

Young people are entering the job market later and in worse conditions, delaying both their social and affective maturity

Meanwhile, those in between, those over 50, are too old for the job market but too young to retire. They have problems refocusing their careers and they are not up for new entrepreneurial adventures. Without opportunities, Trumpism’s political project seduces them with its offer to completely amend it all.

Without a unifying political project, democracy and elections seem a whim of urbanites with good jobs, a tsunami that can tear coexistence apart.

The battle for the facts

The fourth gap doesn’t begin with a “G” but it is fundamental within the political nature of democracies. If there is no consensus about what is true and false, factual reality disappears. Alternative facts, post-truths, fake news and echo chambers are new names for lies.

The difference now is that many of those lying hold public office, they’re journalists or work in the private sphere. They’re salaried employees of lies, a booming sector.

In dubio, pro dubio doesn’t consist of falsifying realty but, rather, creating new foundations on which to confuse reality, desires and emotions. The implied risk poses threats and sets objectives at the cognitive level (the spread of ideas, institutional erosion, the questioning of pluralistic values) and in terms of attitudinal judgement (practices contrary to open societies, a disdain for minorities and a tendency to homogenize). McIntyre argues that, in the absence of factual reality, “politicians can challenge the facts and pay no political price whatsoever.” This is the road to dictatorship.

In sum, contemporary democracies need to revise their institutional foundations, norms and political culture. Without resolving their internal problems, it will be difficult for them to adopt transformative agendas to overcome the challenges posed by today’s globalization, a scenario in which, without doubt, predators are lying in wait for democracies.