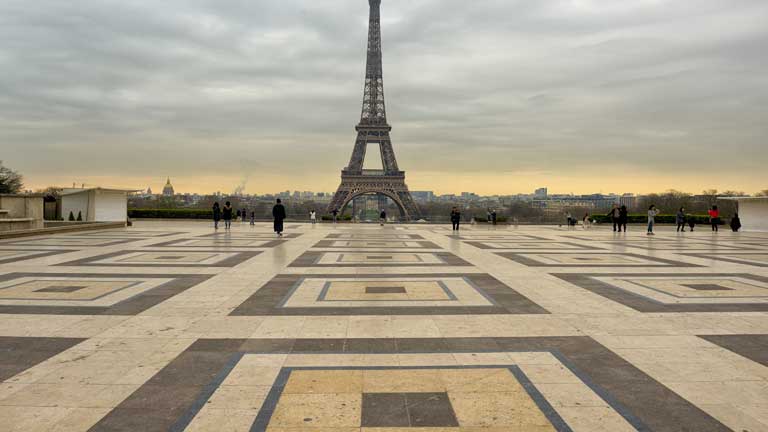 Green-zone travelling: A pan-European strategy to save tourism

The tourism industry has already been heavily impacted by the Covid-19 pandemic and a literal cancellation of the summer season would further push many European countries toward a deeper economic crisis. As most countries are still struggling to contain the virus, as well as with their respective exit strategies, we are heading toward a summer during which international travel might be – if not forbidden – highly discouraged.

Such travel restrictions will additionally damage the already weakened economies of Europe’s southern countries, such as Spain or Italy, because they rely on tourism more heavily than the northern countries. Beyond the direct effects on their gross domestic product (GDP), this could also weaken the fragile balance within the European Union (EU).

How to define the best strategy to exit the Covid-19 lockdown measures is the most pressing question for all major European countries.

France, Italy, and Spain have already announced a regional approach – policies may vary from one territory to another, depending on their current situation with respect to Covid-19. The exit strategies of these countries rely on disconnecting geographical areas by forbidding unnecessary travel between them. This approach – which, in France and Spain mirrored our green-zoning proposal (Oliu-Barton, Pradelski and Attia, 2020) – goes on to label each region as either red (virus not under control) or green (virus under control) in order to (a) avoid the spread of the virus throughout the territory and (b) allow economic activity to restart on a more local level as soon as it is safe to do so (Philippe, 2020; Spanish Government, 2020).

The labelling needs to be secure and reliable. Therefore, the conditions under which a zone is labelled green, as well as the sanitary measures and mobility restrictions that are implied by each label need to be defined with the consultation of the respective health authority.

We propose that the green-zoning approach is elevated to the pan-European level. Consider, for example, Bavaria, a German 'Land', and Mallorca, a Spanish island. If both of them are deemed safe by a common EU authority, they are awarded the "EU green label". It is then safe to travel between two such green zones, just as it is safe to travel between two green zones in the same country.

Building on our green-zoning approach, we propose the following three-step strategy:

Our proposed strategy has the following sanitary, economic, and political advantages:

Containing the spread of the virus

By differentiating between red and green zones, the spread of the virus across the entire territory is minimised. This is the case because travel to and from red zones would be limited to necessary travel only – such as that by key workers – and rigid testing routines would be implemented. As the resurgence of the virus within the green-zone travelling network would have detrimental consequences it is paramount that the conditions for EU green labels are stringent.

Our strategy is a template and could be adapted according to specific regional needs. For example, it may be useful to introduce the "amber label" for zones that show low levels of virus activity but are not yet allowed to join the green-zone travelling network due to insufficient evidence, thus putting the whole network at risk.

To illustrate, consider Mallorca where tourism accounts for 45% of its economy with almost 14 million international tourists annually, mostly during summer [1]. For this island to obtain the EU green label as soon as possible is crucial, since being part of the European green-zone travelling network might be the key to save its economy.

Consequently, enabling pan-European tourism over the summer months is probably the single most important determinant for the economic survival of several European countries. In addition to its benefits for the tourism sector, the recovery of, for example, the airline and leisure sectors would also be accelerated. This likely avoids the use of the ESM, which is in the particular interest of some northern, wealthier countries.

Figure 2. Example: The hypothetical impact of a European green label for Mallorca 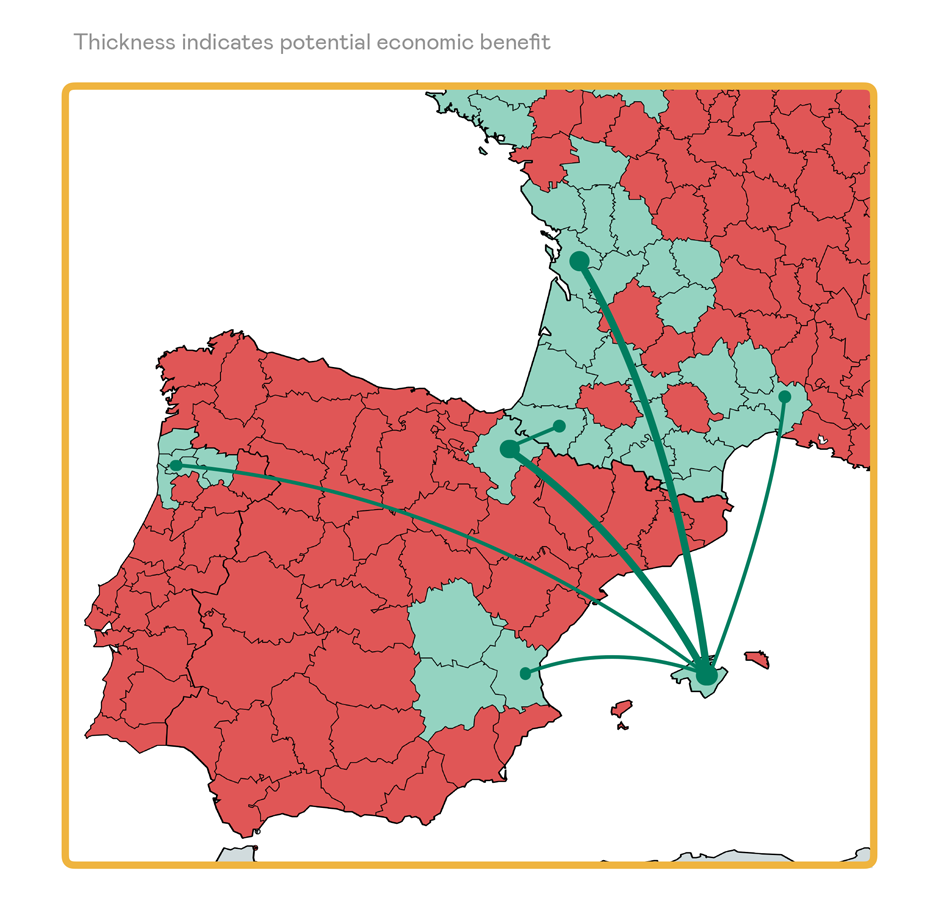 Fostering community and the European identity

Giving the opportunity for zones to "determine their own fortunes" would create a stronger incentive for communities to follow regulations and actively contribute to the control of the Covid-19 outbreak. Nationalistic considerations thus become less important and people’s identification with the European project has the potential to increase, as green-zone travelling becomes possible between zones irrespective of which country they belong to.

Figure 3. The green-zone travelling network: a safe way to travel through Europe during the pandemic (example labelling) 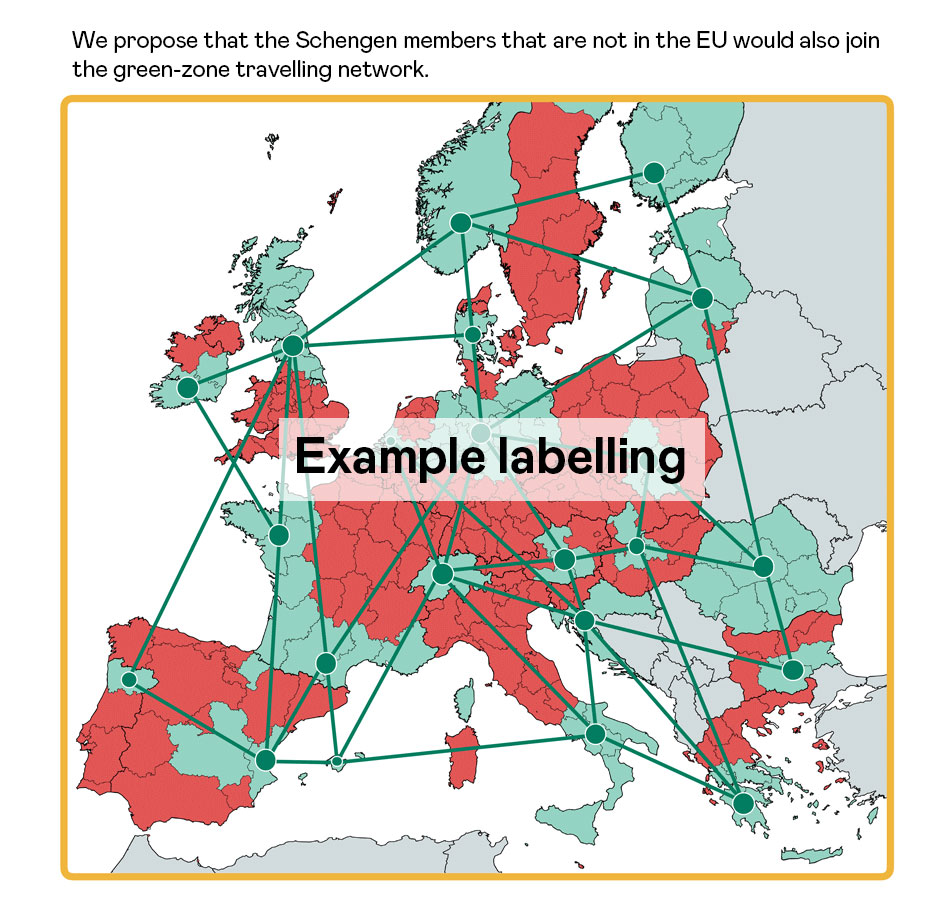 Action plan for the European Union

The role of the EU has repeatedly been questioned during the Covid-19 pandemic as a result of slow reaction and little coordination in the early stage of the outbreak. By showing definitive leadership, the EC should rise to this opportunity. Its action could define the future of several European countries.

Our green-zone travelling approach can only be orchestrated on a pan-European level and indeed it falls under EC competence (Treaty of the European Union, Article 5 §3). The EC should lead the implementation of steps 1–3 outlined above.

In particular, we foresee the importance of:

Green-zone travelling for a prosperous future

In summary, we believe that the green-zoning approach – which has already been implemented at the sovereign level by many European countries – could reap even greater benefits when used on a pan-European scale to allow green-zone travelling.

By focusing on the tourism industry, we outline the importance of elevating the exit strategy from the Covid-19 pandemic to the European level. We firmly believe that building the European green-zone travelling network is a unique opportunity for the EU to show its strength by creating a win-win situation for all member countries, and not allowing the summer season to fall victim to the pandemic.

* The authors thank Andreu Mas-Colell, Toni Roldán and Max Roser for their insight and support. An earlier version of this column first appeared in VoxEU, the policy portal of the Centre for Economic Policy Research (30 April).