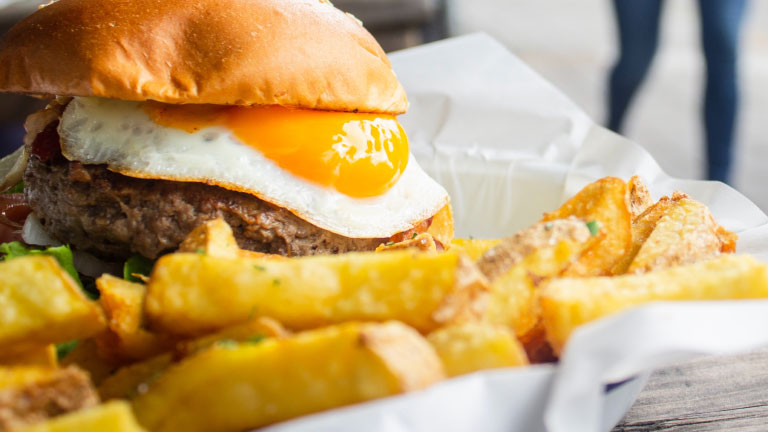 Who is to blame for the health risks of junk food: consumers or food companies?

Some food and beverage companies believe consumers are the culprit, while others accept part of the blame. Overall, food companies apply different tactics to protect their current business model.

This interview is based on research by Tobias Hahn

Eating highly processed foods, saturated fats and added sugar on a regular basis is linked to many negative health effects. Fast food is one of the major culprits of the global obesity epidemic.

Research also shows that, in the long run, a poor diet that is high in junk food can also lead to cardiovascular disease, type 2 diabetes, some types of cancer and even earlier mortality rates.

In their study in the Academy of Management Discoveries, Esade Professor Tobias Hahn and his co-authors at the University of Manchester and KEDGE Business School examine how food and drink companies are responding to the public debate around obesity.

Do Better: Who is to blame for the health risks of junk food?

Tobias Hahn: It is probably true that food companies are not to blame alone, but they play a large part. An overwhelming majority of health studies tell us that the food industry plays a major role in the obesity epidemic.

The food industry plays a major role in the obesity epidemic

However, addressing obesity requires a fundamental shift away from these products. So, if food companies want to address obesity, they have to change fundamentally, but doing so threatens the core of their business model.

Does the food industry admit this part of the blame?

We conducted a study of the print media coverage to analyse how companies were publicly defending their business model around obesity. In our findings we have shown that some companies try to minimise their involvement in health risks by shifting the responsibility to consumers. They argue that they are merely making offers and consumers are the ones making the decision.

They are playing the blame game...

The problem is that consumers don’t control the ingredients of highly-processed, precooked food. You heat it up in the microwave and eat it without really knowing what’s in it...

We should read the small print...

Many nutrition research papers show that people have got used to very high levels of sugar. Something apparently healthy like a yogurt may contain sugar levels as high as 35%, while nutrition scientists recommend a limit of 15 to 20%.

There is a tension between these companies’ business models – they make a great deal of profit from these not-so-healthy foods – and health issues such as obesity. If the food and beverage industry were to change its products and make them healthier to address obesity, it would threaten its profitability.

Why wouldn’t people want to be healthier?

Reformulating the products is actually not so easy because people are used to their taste. If food companies change how it tastes quickly, studies show that many people wouldn’t buy them anymore. In the UK, for example, the supermarket chain Tesco unlisted a very popular soft drink called Ribena due to its high sugar levels and there was a huge outrage in social media demanding it back.

Do you think companies care about our health?

The interesting thing that we found is that most companies don’t deny the problem. Of course, they also blame other reasons for obesity, but they admit that they might be part of the problem.

Most companies don’t deny the problem, but they also blame other reasons for obesity

What did you discover?

We identified several tactics that companies use to publicly position themselves around obesity and deal with that tension. The first tactic is what we call deactivating. Like in the early days of tobacco, these companies provide evidence that there’s no link between their food products and obesity.

But they are lying...

They try to eliminate the tension by deconstructing it and by questioning it with statements such as "It’s not true that our products make you obese.” The other way of questioning their involvement is by diluting the issue. Rather than denying their involvement, they admit that they contribute to the issue but say that other causes contribute as well, such as people’s lack of exercise, or people’s lack of home cooking, or cultural habits. They try to minimise their role in the problem to mitigate criticism.

What other tactics have you detected?

Some food companies try to shift their responsibilities to consumers. For example, Coca Cola says they have diet and zero options, and the consumer can choose. McDonalds says you can eat salads in all of their restaurants and it’s not their fault that people eat hamburgers and fries. They shift the tension to other parties and mostly to consumers.

It’s true that nobody is forcing consumers, but perhaps some are not properly informed of the risks.

Maybe, but these companies argue that it is not their responsibility to parent their consumers. “It’s a free world with free consumer choices, we just make offers, so we are not to blame.” Coca Cola’s strategy, for instance, is to tell people that if they move and exercise enough, they can drink as many cokes as they want. This is really putting the blame on the consumer.

What other tactics do they use?

Another one is destabilising. In this one, although the companies admit there is a problem, they fight all kinds of attempts by policymakers to address the obesity problem. For example, if a sugar tax is proposed they would argue that it would hit the poor, it would be unfair, it wouldn’t work, it would decrease the purchasing power of people...

They would come up with other tensions between their policy and goals other than fighting obesity to destabilise policy interventions. They do this because they want to protect their business model from new regulations.

And then there’s a slightly more proactive tactic which we’ve called capturing, where some food companies state they are part of the solution. They provide information to consumers on ingredients and healthy eating. They do reformulations to make their products healthier. They offer new low-calorie options. They make smaller packaging to reduce calories. The idea is that they try to portray themselves as part of the solution and so the blame goes away.

Can this tactic lead to real change?

Sometimes this proactive tactic to become part of the solution can make a difference, but sometimes it is more symbolic and does not lead to real change. Changing course is not easy for food and drink companies. For instance, some years ago, Indra Nooyi, former CEO of PepsiCo, pushed for healthier snack and beverage choices, but in the end, shareholders told her to stop doing so. The junk food business is more profitable...