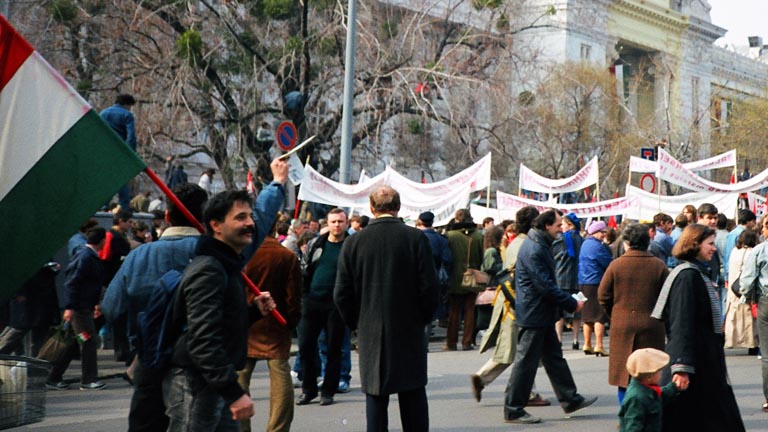 What are the main causes of populism? Michael Ignatieff, President and Rector of the Central European University, talks about the global rise of populism, its causes and consequences.

Michael Ignatieff: Populism is a movement in which you use democracy against democracy. The populists say: “We the people want to take back control from the elites who have corrupted the political system.” So it is a democratic argument used against the democratic system.

Sometimes it can enrich a democratic system to have a populist challenge. I don’t think populism is always a negative phenomenon. There is nothing wrong with the defence of your culture, your language and your identity. The problem comes when you want to use that defence to exclude others, to create an identity that shuts other people out.

But why do people turn to nationalism and populism? They do so to defend themselves, their families, their interests, these things that they hold to be important. I have never been someone who thought that populism was necessarily negative. It only becomes negative when it excludes, when it denies the rights of others. That’s when the question becomes serious.

Populism only becomes negative when it denies the rights of others

We should only be afraid of populism when it creates a politics of enemies. When it says: “There is us and they are the enemy.” In a political system that is genuinely dangerous. It produces polarisation, people stop talking to each other.

At that point you have to say: There are no enemies in the democratic house. There are only people who argue and disagree. But disagreement is not fatal. Disagreement is what politics is all about. It is when populists accept to refuse the legitimacy of those whom they disagree that populism becomes dangerous.

Populism and the media

The connection between populism and the media is noticeable in Trump’s America, in Orbán’s Hungary or in Erdoğan’s Turkey. Populist leaders are always running against the media. They say: “You don’t represent anybody. Who elected you? Your voices don’t matter, I speak for the people and I listen only to the people, so I don’t need to listen to you.”

There is an in-built conflict between populist leaders and the media, which in my view reflects their hostility to one of the principles of democracy which is a free media, a critical media, a media that says: “The Emperor is naked.”

What challenges does populism pose in a global world?

We want to live with other people. We want to live with difference. Populism is a challenge when it says, “Let’s create frontiers to prevent the mobility of people.” Every political community has to have a frontier, a border, but populism at its worst says, “I don’t want to share my country with anybody.”

In Hungary, for example, the country is perfectly entitled to be nationalistic about being Hungarian. The problem is it doesn’t want to let anybody into Hungary. Well, that’s a populist nationalism which is ultimately dangerous.

Why did the Central European University have to leave Hungary?

The Central European University has been in Hungary for 25 years and three years ago the Hungarian government said: "You can stay here as a Hungarian institution under our control, but if you want to be a free institution giving American degrees, you can’t stay here." So we have been forced to move to Vienna that part of our teaching which is our American degree granting portion. We will always maintain a strong place in Budapest, but we have now been forced to open a new campus in Vienna and that’s a scandal.

Are Western democracies at stake?

I think Western democracy is much more robust and much healthier than people think. If you move to Brexit, there are people who say British democracy is in crisis. I don’t agree. It seems to me this is a country that has had the most fundamental debate about its future in its history and it has been a peaceful debate in which the Courts have done their job – they have said, “No, you can't parole Parliament,” and the Parliament has done its job and has said, “No, you can’t exit without a deal.”

From G20 to global leadership: a gap to be filled

Globalisation in review: 5 most popular articles on Do Better