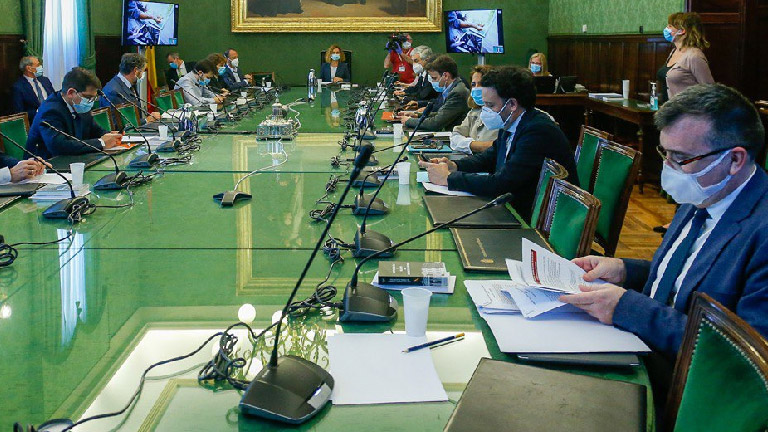 From centralised management to regional management of the pandemic: challenges and opportunities

The coronavirus crisis has involved the great challenge of coordination between central government and regional governments in decentralised countries like Spain. The obstacles to effective cooperation between the different levels pose a question about the level of public policy management in general and the level of the threat to health in particular: What is the ideal distribution of competences for policy design and implementation?

On the one hand, a centralised coordination mechanism prevents measures implemented in certain regions having a negative impact on others and, therefore, increasing the collective risk. This dilemma is typical of collection action: all governments benefit from better global control of the pandemic but individually, they each prefer to regulate the lockdown of their economy or the restriction of movement according to the health risk in their region. Consequently, in the absence of coordination regulations about including negative external impacts in measures to combat the pandemic, the collective response will deviate from the epidemiological ideal.

On the other hand, the excessive centralisation of pandemic management comes at a cost. A centralised, standardised decision imposes a maximum common denominator on restrictions to the economy and freedom of movement. When the impact of the epidemic varies considerably between regions, the measures implemented may cause a disproportionate economic lockdown in some regions. In addition, decentralisation enables regions to experiment with their response to the virus and thus contribute to faster collective learning about the most effective measures for combating the epidemic or adapting services to the health risk (such as re-opening schools).

Decentralisation enables regions to experiment with their response to the virus

In the coming days, the balance of pandemic management in Spain will shift from a centralised scenario to one in which regional governments have greater freedom to set the pace of returning to normal. Until now, decisions about confinement and the early stages of lockdown easing have been centralised. Once the autonomous regions enter phase 3, their governments will have the last word. Now that the autonomous regions are involved again in the management of this crisis, it is necessary to check the shortcomings that have been seen in recent weeks, the impact of centralised management on the regional model, and the key factors to ensure that the new distribution of responsibilities maximises the benefits of decentralised management and minimises the potential costs.

The coronavirus crisis and the ensuing coordination difficulties at all levels have revealed certain shortcomings in how the Spanish State of autonomous regions operates including, but not limited to:

Table 1. Lessons learnt from the coronavirus about the autonomous region model

State of emergency and the functioning of autonomous regions

Centralised management during the state of emergency has stripped the autonomous regions of responsibility due to the imbalance between the competences assigned to them – public health, healthcare and social services – and their limited involvement in the design of policies to combat the epidemic. Indeed, most citizens think that the main level of government responsible for dealing with the coronavirus in their region is the central government.

Figure 1. Most people think that the central government is (and should be) responsible for handling the coronavirus crisis in their autonomous region

The highly visible role assumed by the central government has suspended the accountability of regional governments. Despite being the main entities responsible for public health and healthcare and social services in their regions, the appreciation of each autonomous government’s strengths and weaknesses in these areas has been relegated to the background.

Another impact of the centralisation of power in recent months is that intergovernmental relations have become more vertical and hierarchical. The prevailing dynamics have transformed regional governments into passive rather than active agents destined to receive instructions from the central government or apply to the ministry of health to move into the next phase. This imbalance has complicated co-governance between different levels of government, and making the central government responsible for the pace of lockdown easing has encouraged regional governments to be exempted of their responsibilities.

Table 2. Impact of state of emergency on Spain’s model of autonomous regions

Proposals for management by regional governments in the new normal

The main issue about a new scenario in which regional governments regain responsibility for handling the health crisis and the ensuing economic fallout in their regions is how to ensure that the measures taken during the new normal to ease the lockdown are taken at the right pace (not too quickly, which would increase the risk of spreading the disease, but not too slowly, which would hinder economic recovery).

One of the main challenges is to prevent decentralised decisions lifting the lockdown too quickly because this would increase the collective health risk. There are, however, four principles that can redress this imbalance:

One factor that can help reduce the risk of easing the lockdown too quickly is the preference of public opinion for health safeguards. In the early weeks of confinement, citizens gave greater priority to virus contention than economic recovery. This may have changed as the weeks went by but the tendency was too pronounced for citizens’ preferences to put pressure on regional governments to relax the conditions governing the new normal.

Figure 2. As regards the easing of the coronavirus lockdown versus economic recovery, where do you stand? [1]

The return of decision-taking about epidemic management to regional governments will give their actions greater visibility and make them more clearly subject to the appraisal of voters. In this respect, it may be more costly for a regional government to implement measures too soon and then have to reverse them, than to implement them more gradually whilst ensuring they will be permanent.

This entails a paradox: the more the central government controls the new normal to prevent regional regulations being too lax, the greater the likelihood of regional governments wanting to get involved in these policies. In this landscape, regional governments can justify more lax (and more popular) policies to their citizens in the hope that any bad news (such as the non-compliance of such policies with the health safeguards set forth in and governed by a royal decree) would be announced by the central government.

Decisions taken by regional governments about the lockdown easing and regulations governing the new normal will be subject to various sorts of pressure from representatives of civil society. To reduce the likelihood of these decisions being co-opted by a stakeholder, the proposals and demands made by civil society upon the government must be channelled via multilateral forums based on the principle of transparency.

Plurality is also applicable to the profiles of the experts who advise the government. In addition to experts in infectious diseases, governments must include economists and sociologists in their analysis and monitoring cabinets because this will enable them to have a more global, balanced vision of the impact of the measures implemented in spheres such as the economy or education, besides how they affect the control of the epidemic.

As regards the benefits of decentralised management, the lack of knowledge about the virus and the lack of experience about which measures can ensure a better balance between lockdown easing and containing the health risk all transform experiments and lessons about what works and what is not essential into an activity that can be carried out better within a decentralised framework.

Reopening schools: why, how and for who

Podcast: Can supercomputing speed up the race to find a Covid-19 vaccine?