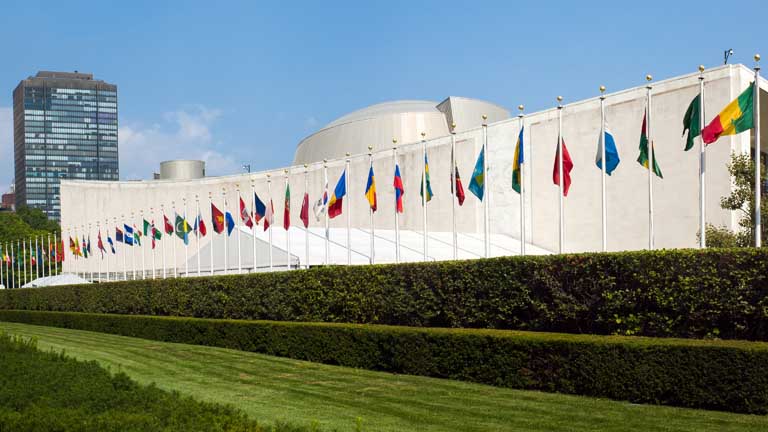 Tech 4 Good: Working for a better future in partnership with the United Nations

The year 2020 opened with several terrible news items. Notwithstanding, every cloud has its silver lining. Back on 17 January, students from Esade Business School met with David Damian and Omar Mohsine at the United Nations in New York. What started as a simple introduction then in New York turned into a strategic partnership in the following months.

Within the UN, the Jesuit university connected with the Global Service Centre in Valencia and the Office of Information and Communications Technology (OICT), which enables a better, safer, more sustainable future through innovative technology. After a few online meetings, two projects were proposed to the students selected to work on this partnership.

The team, made up of Cédric Hofer, Petro Malkoun, Christian Genth, Jelena Kurtović, and Lupo Benatti, accepted the projects with enthusiasm and determination. "I am very happy to apply my recently acquired skills to help such an impactful organisation as the United Nations," said Jelena.

After brainstorming together, the students chose to adopt the agile methodology for the projects, an efficient way to cooperate effectively through weekly sprint meetings, both internally and with the UN team members. Each meeting consisted of a review of previously defined weekly deliverables, such as what went well, what went wrong, and how it could have been improved; and setting well-defined objectives for the following meeting.

Therefore, working remotely throughout the lockdown, the students managed to deliver results by moving through mistakes, iterations, and step-by-step improvements.

The SISM project focused on the tickets that the IT teams based in Valencia and Brindisi received from UN teams, locations and missions. These ranged from simple onboarding tasks to massive infrastructure migrations. The students’ challenge was to optimise the handling of these tickets by identifying patterns.

The first step was to understand the data in the large datasets and the relationship between them. Since the students were dealing with worldwide data, the timeframe was limited to three months to ensure flexibility of the models. Understanding the data was key to deliver useful results, so this step took the most meetings and engagement from both the UN and the students’ side.

Once the data and the datasets’ relations were clear, the students cleaned the data, created new datasets with only the needed inputs and started creating pattern recognition models.

Organising data through cleaning and models allows a better overview of the performance of teams and KPIs. In this respect, the students were able to pinpoint which KPIs needed refining or changing, which teams performed better and in which timeframe, and they featured engineered new variables to measure performance more accurately.

Working under agile ensured a space to exchange feedback with the UN that provided insights for the students to refine their model accordingly and together come up with behaviour hypotheses on the reasoning behind the patterns that the models showed.

The FRIM project focused on the large-scale peacekeeping mission in Africa. The students worked to optimise each mission from an environmental and financial point of view through the adoption of data analytics, including predictive artificial intelligence models and data visualisation to report the insights and results.

Given the large datasets, made up of thousands of records, a large portion of the project consisted of cleaning and polishing the multiple datasets provided, which ranged from water and energy consumption to on-camp energy production. The students generated additional variables combining those that were already available, a process called feature engineering. Furthermore, the data provided was enhanced with additional datasets like local weather predictions to improve the model accuracy.

In terms of savings, the model predicted potential financial savings and a decrease in CO2 emissions.

Furthermore, a prototype model was developed to predict the water usage of a housing unit, which was then compared to the actual water usage. The goal was to create a monitoring tool to detect leakages or abnormal water consumption quickly, to potentially reduce water waste. The model was based on machine learning methods, namely gradient boosting, where the created model was trained with the available data to allow it to make predictions about every room that consumes water. Along with that, a dashboard was created to visualise the data generated by anomalies, thus allowing the management team to react fast based on the graphs.

What started as a test turned out to be a successful partnership between the UN and Esade which we hope more universities and organisations will undertake. Nothing is better than applying theoretical knowledge to practical actions, particularly when it is done for the greater good.

Since its inception, artificial intelligence has been adopted to drive commercial and military interests. Algorithms were and still are mostly programmed to drive profits, boost engagement, and manipulate people’s behaviour. Despite the exponential improvements of these systems, global efforts to exploit this technology in the areas of peace and security, international development and human rights are still minimal when it comes to making the world a better place. We need to recalibrate our priorities as a society by aiming our future technologies towards a more transparent, sustainable, and free world.

As a Chinese proverb says, "the journey of a thousand miles begins with a single step"; if we want to leave a positive mark on this world, we had better start moving.