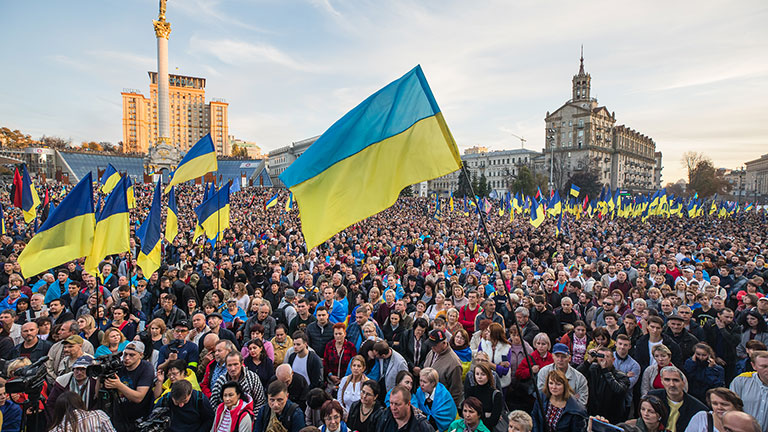 Diplomacy vs. propaganda in the Ukraine crisis: the need for compromise

The virtue of diplomacy is its ability to change the course of seemingly unstoppable events and allow other options to remain on the table.

In the introduction to his wonderful ‘The Sleepwalkers: How Europe Went to War in 1914’, Professor Chris Clark reminds us that in history, international relations, and military or strategic studies, we must look beyond the causes of an event, because propaganda creates a narrative, a universe of arguments, and a point of no return.

Each player considers that his argument is well structured, that it follows a logical procedure, and raises justified claims. Players go to war because they believe they are right and have no choice. Diplomatic options are squandered because players have preconceived ideas and decisions have been made. Clark points out that such analyses are insufficient. We must also consider how the path chosen by each player leads to conflict.

Herein lies the metaphor of the sleepwalker: the players believe that the die is cast and there is no choice but to begin battle. Let us hope that we wake up in time to avoid war – yet battle has already begun. Ukraine, weakened by the annexation of Crimea and political instability in the Donbass, has suffered some 14,000 deaths. Before the conflict escalates, diplomacy can still play a key role outside the media spotlight. Such talks would hinge on the search for (less) bad solutions and reciprocal concessions. Three axes for diplomatic de-escalation are identified, and these must reconcile deterrent actions with the effective advancement of negotiations.

Economic deterrence, such as sanctions and barriers to international trade, is intended to cause the Russian elites to turn against their government and push for a lessening of claims. However, the economy operates in an open system and Russia would take countermeasures. The consequences of blocking the Nord Stream 2 pipeline would be terrible for the European Union: economic slowdown; unemployment; inflation; and rising energy prices.

Germany does not support this approach because it would be the first power to suffer, it is a net investor in the Nord Stream pipeline, and has good trade relations with Russia. American intelligence supports the sanctions approach because it will not have to pay the bill for skyrocketing gas and oil. Given the new Russian gas pipeline, reducing energy dependence is a very long-term bet.

Military deterrence has another purpose. If Russia launches an offensive, America must respond to keep alive its discourse as a global player with the ability to impact on several fronts. Although Ukraine is not a NATO member, a favorable argument could be built for military intervention and assistance.

Escalation would be rapid with thousands of deaths within a few weeks, and a deteriorating situation for political negotiation. Today's wars have fuzzy contours and do not end with a peace treaty at Versailles. Deterrence serves to discourage the players from taking military action and seeks a political solution. That is why the propaganda game is played daily: we see images of Russian trains; mobilized troops; field exercises; and other military actions shared and narrated on audio-visual media.

The dangers of propaganda

Propaganda reminds the other side that we have the capacity to coerce and make ‘our people’ share an agenda of anxieties. My recommendation: in the absence of journalists reporting on the ground, be wary of videos produced by any government.

The third area is international organizations. The diplomatic game is played on two levels. The European Union aspires to have its own voice, but the member states will not fall into line behind Brussels. On the contrary, internal European divisions hinder the projection of a single foreign policy.

Germany is a reluctant power, in Pilar Requena's apt metaphor, especially when energy supplies are threatened. France wants to lead a new Europe, and at the same time, strengthen its military industry. Together, even in the Normandy Quartet, the European voice is diluted. Italy and Spain are content to take a back seat in the international arena, while Poland defends a hard line in its neighborhood. Hungary misses no opportunities to discredit the EU and unified action.

On the NATO chessboard, a new strategic concept (to be approved in Madrid in June 2022) must define the lines of political and military action for the decade ahead. Eastern Europe is the touchstone for the security architecture and defense of liberal values. If NATO accepts a new Yalta Conference built on Russian-inspired spheres of influence with limited sovereignty, then China will have a clear path to defend the same positions. Therefore, it is necessary to meet some Russian requests regarding military deployment, and so prevent Moscow from forcefully expanding its political power. Finding a balance will not be easy.

In short, diplomacy is back to where it was. In these weeks of uncertainty, it is worthwhile reviewing the Minsk II agreements because they contain political concessions adjusted to the interests of the players, give relevance to the interests of the Ukrainians, and favor regional stability. This is almost everything we need. Diplomacy is about finding formulas for coexistence, and not about creating a perfect global order. Let’s hope that we are still in time to stop war.

This article was originally published in Spanish in The Conversation under a Creative Commons license. Read the original article .