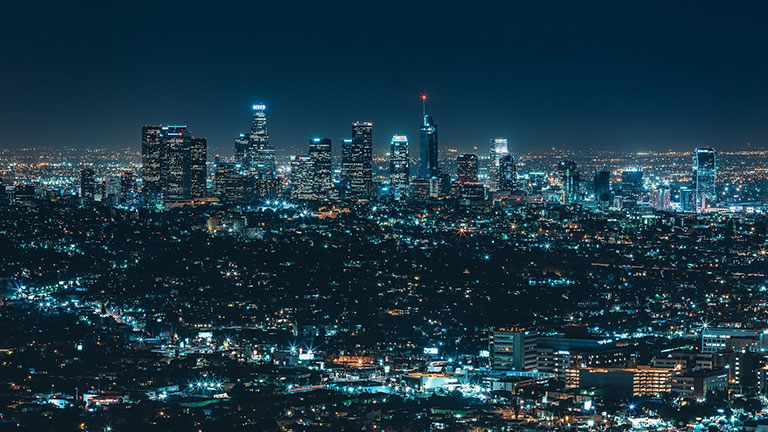 Urbanization—people moving from rural areas to towns and cities—has long been one of the main features of economic development and it has accelerated in recent decades, especially in Asia. The share of population living in urban areas is significantly correlated with per capita income levels across countries and, in the process, urbanization has also resulted in major changes in the demand for goods and services—resulting in enhanced consumer convenience, business opportunities as well as infrastructure pressures and policy challenges.

But within urban areas there are very different types of localities. Are large cities becoming victims of their own success and is the balance of advantages and disadvantages of large cities changing? If so, it would result in shifting trends in the shape of urbanization, including the size of urban localities, with extensive implications for many markets and the provision of services—both public and private. 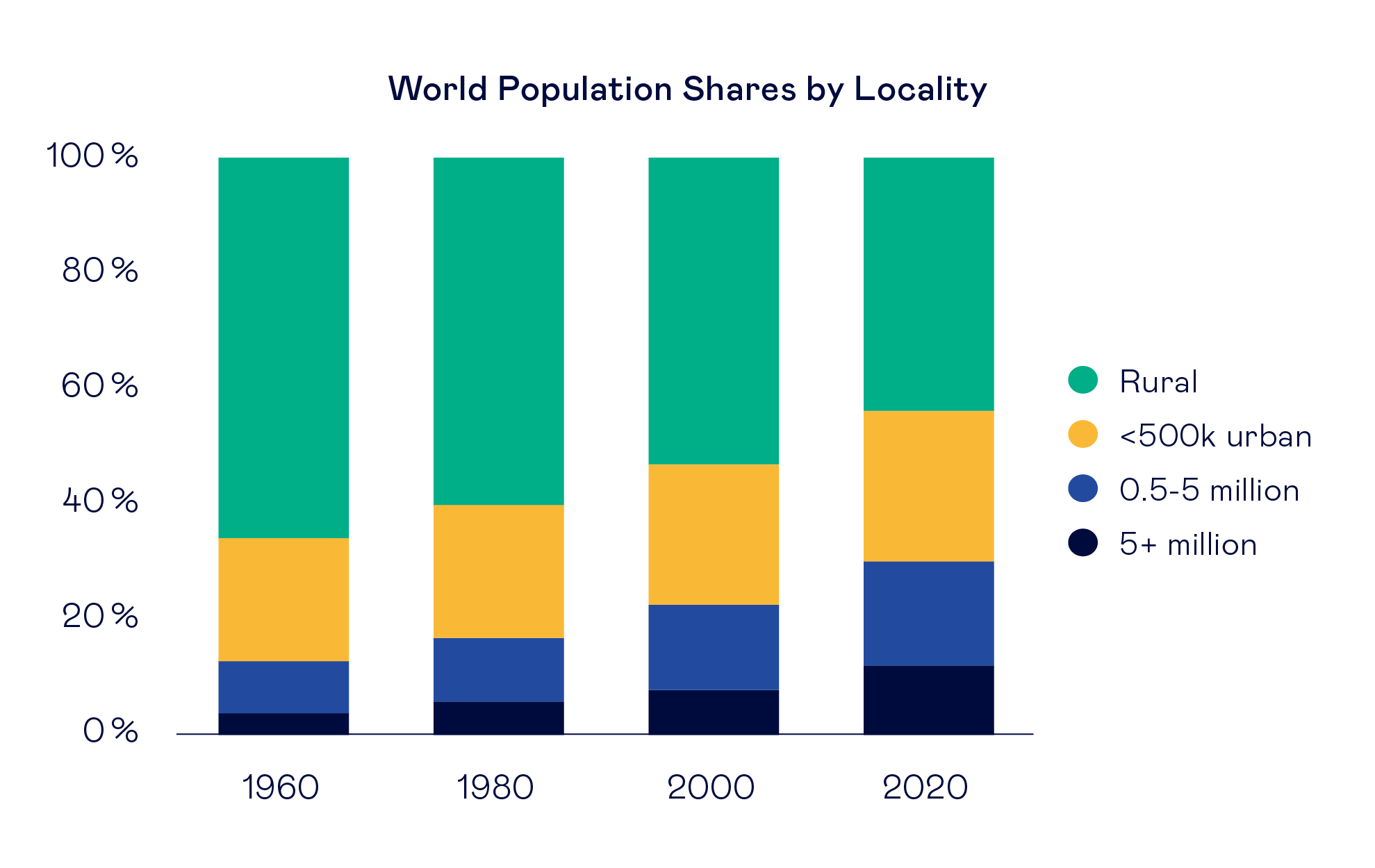 The share of the global population in rural areas has been shrinking steadily in recent decades (although in absolute terms the number of rural residents continued to grow, has only now stabilized and over 40% of people in the world still live outside of urban areas). Most of the growth has taken place in cities with half a million or more population—which went from representing 12% of global population in 1960 to 30% in 2020—and within that category the fastest recent growth has been in cities with more than 5 million inhabitants that have gone from having 100 million inhabitants in 1960 to 900 million in 2020.

Behind the global averages there is a gradual process of additional urbanization in high-income countries and a massive movement of the Chinese population to urban areas from the 1990s onwards. The urbanization dynamic in China is especially significant because of the growth that it has generated in the largest cities, so that currently 17 out of the 81 cities in the world with populations above 5 million are Chinese.

In the rest of the world (emerging and developing countries, other than China) there has been a steady migration out of rural areas but there are huge differences in the level of urbanization already achieved and the role of large cities. Latin America is highly urbanized with Brazil and Mexico, for instance, having less than 20% of the population in rural areas and about 40% in cities larger than 1 million inhabitants. At the other extreme, major countries in Asia and Africa have the majority of their population still in rural areas and only small shares of the population living in large cities (less than 20% in India, Nigeria and Vietnam and even less than 10% in Ethiopia and Mozambique, for instance).

Because of rapid urbanization in Asia and elsewhere, large cities are no longer primarily a high-income country phenomenon, as they were in 1960. In China there was limited expansion urbanization until the 1990s (in part as a deliberate matter of policy) but the pace then accelerated and today there as many people in large cities in China as there are in all high-income countries combined. In the rest of the world (other emerging and developing countries), cities in Latin America and Asia started attracting people at high rates from the 1980s onwards but the growth of large-city populations has slowed down into the 2000s.

The relationship between urbanization, average city size and economic growth appears to be non-linear and is greatly dependent on the country’s size (in terms of geography as well as population). Generally, smaller cities or towns (less than half a million inhabitants) play an important role, as least in transition phases from rural to urban societies. Very large cities (over 5 million inhabitants) offer important advantages often described as agglomeration economies (businesses of all kinds located close together result in network effects including productivity increases and innovation) and create ample economic opportunities for people and businesses alike.

But the paradox of urbanization is that the same dynamic can generate prosperity and misery. Pollution, for instance, has become an increasingly negative aspect of large, industrial cities and, especially in low-income environments where population growth often outstrips infrastructure development and service provision, large cities also have other dark sides—such as acute (and highly visible) inequality, poor living conditions for new arrivals, and crime.

The trend away from rural areas looks set to continue. But there is considerable uncertainty about how the size composition of urban localities will evolve. The decade of the 2010s was characterized (compared to the previous one) by a shift of growth from small cities (less than half a million inhabitants) to larger ones. UN projections for the current decade include an acceleration of growth in the population of the largest cities (those with more than 5 million inhabitants) relative to other urban areas—across all countries but especially pronounced in China and other Emerging and Developing countries where between 2020 and 2030 they show an increase of 39%. 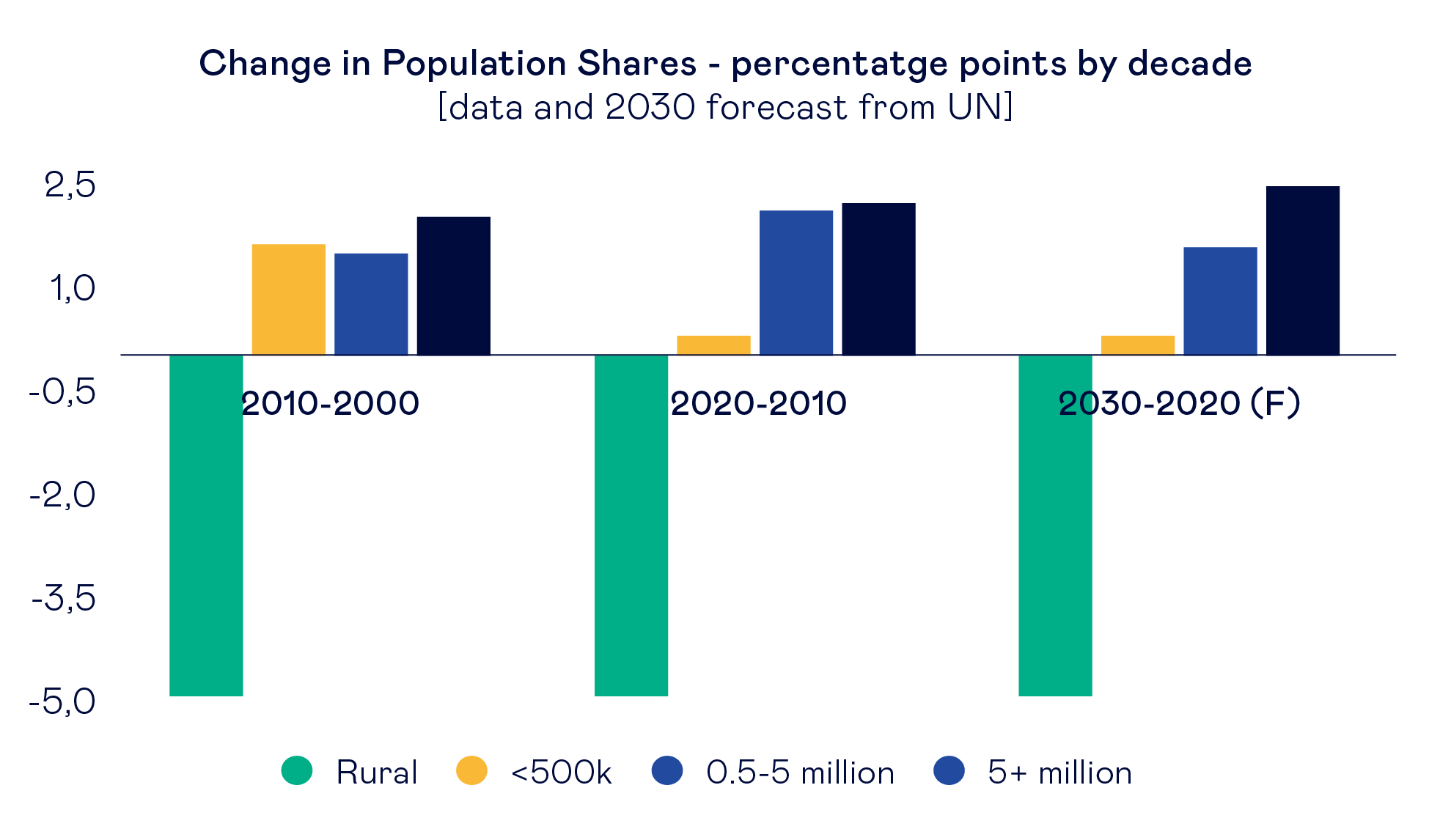 In high-income countries, the UN projections (made before the 2020-2021 pandemic) also show the population of large cities continuing to grow (by 14% during the current decade). But there had been signs before pointing in a different direction (both New York and Chicago lost population in the previous decade, for instance) as a result of concerns with pollution, crime, housing prices and the related commuting time. The dynamics behind a possible reversal of urbanization composition trends appear to have since been reinforced as the experience of pandemic lockdowns changed perceptions on the relative advantages of large and small cities and has increased the willingness of employers and employees to enter into remote work arrangements.

Significant numbers of people in large cities such as London and New York (25% and 28% respectively) were considering moving out of the city already in 2020, according to a Gensler survey. And a 10-city follow-up survey in February 2021 found that half of people considering moving from a large city expected to do so to a smaller city (30%) or to the suburbs. The proportion of people wanting to move to a smaller city was highest in Mexico City and in Paris (53% and 41% respectively).

Looking ahead the question is whether urbanization will continue apace—or even accelerate, or whether we are facing a change of trend … one that had been brewing before but has accelerated because of the pandemic lockdown experiences. And, if so, how will it affect new-growth megacities, established large metropolis in high- and low-income countries in already urbanized and in still-rural countries?

Although paradoxically it is in high-income countries where there seems to be a new predisposition to move from larger to smaller cities, it is in many low- and middle-income countries where the quality of life in very large cities is harshest—especially in most counties (China being a notable exception) where new large-city growth has not been matched by infrastructure investments.

Technology is a relatively new factor at play in this regard: as connectivity improves, larger and larger percentage of the world population have access to the Internet. Internet usage is highest in high-income countries and usage gaps between rural areas, small cities and large cities are steadily narrowing. Data from the Gallup World Poll indicate that the gaps—especially between small and large cities— are also narrowing in middle income countries, while in low-income countries large cities still have significantly higher Internet usage rates than both smaller cities and rural areas.

As these gaps continue to narrow further and more widely, the relative advantage of large cities in many country situations could be reduced significantly—helping to generate momentum towards smaller cities. Although it will not be homogeneous across the world, and the magnetic power of very large cities may remain in force, it is a dynamic well-worth watching because any shift away from large cities would have sweeping implications for the supply of labor and skills and for the demand of products and services.