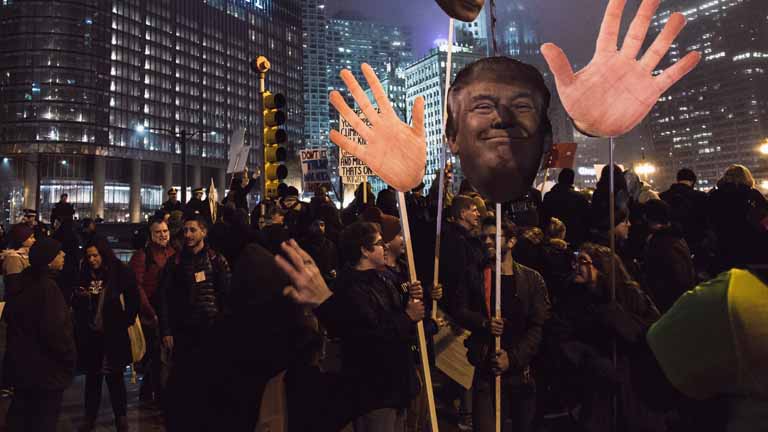 What does the world think of Trump?

US President Donald Trump’s ratings around the world remain low, according to research by the Pew Research Center. Trump’s foreign policies receive little support and public opinion around the globe shows little confidence in him.

Richard Wike, director of global attitudes research at the Pew Research Center, reveals which countries like and dislike Trump the most – and which American policies made him lose popularity.

Wike presented his research findings at an event hosted at Esade and organised by the Pew Research Center and the American Chamber of Commerce in Spain.

Richard Wike: The report looks at public opinion around the world about the United States, President Trump and American policies. The study shows that President Trump remains unpopular. When compared to his predecessor Barak Obama, Trump’s ratings are generally much lower.

These negative attitudes towards President Trump impact on how people think about the US.

Some of the most negative attitudes towards President Trump are among some of America’s closest allies in Europe and elsewhere. Countries like Spain, the UK, France and Germany are very negative towards Trump, and these are nations where President Obama had very high ratings.

Countries like Spain, the UK, France and Germany are very negative towards Trump

You also see negative attitudes towards Trump outside Europe. There are some exceptions – he gets good ratings in the Philippines and Israel, but the broad global pattern is negative for President Trump.

Which countries are most anti-Trump?

We see high levels of anti-Trump feeling in a number of European countries. Germany, for example, is very negative towards President Trump. You see this in Western Europe and elsewhere.

The country that gives President Trump his lowest ratings is Mexico

The country that gives President Trump his lowest ratings is Mexico. And that’s been true in our survey for three years in a row. His proposal to build a wall on the border is very unpopular among Mexicans. There are other things he has done that make him unpopular in Mexico – and this is the country where he gets his lowest ratings.

How are Trump's ratings compared to other leaders?

We asked about other world leaders – including Angela Merkel in Germany, President Macron in France, Vladimir Putin and Xi Jinping.

Merkel gets the highest ratings, followed by President Macron, and then negative ratings for Putin and Xi. But the most negative ratings in the survey are for President Trump. People globally have less confidence in him than in other leaders.

How popular are Trump's policies around the globe?

Some of the Trump administration’s major policies are largely unpopular around the globe. For example, his policies to increase tariffs, withdraw from the Paris climate agreement and withdraw from the Iran nuclear deal. All these decisions are broadly unpopular and our data shows that a lot of opposition is generated when the US pulls back from international commitments. On policies like trade, immigration and climate people see the US pulling back and they are generally opposed.

When we look at Spain and Western Europe, we see some of the biggest changes over the last couple of years in how people think about the United States. President Obama was especially popular in Western Europe – and now it is where President Trump gets some of his lowest ratings.

We see some of the biggest shifts in Western Europe in how people think about the United States.

Have right-wing supporters increased or decreased their confidence in Trump?

People on the ideological right have a more positive view about President Trump – especially people who are on the populist right. People who support parties like the AFD in Germany, or National Rally in France, tend to be more positive about Trump.

What do younger people think of the United States?

Why Trumpism has already won