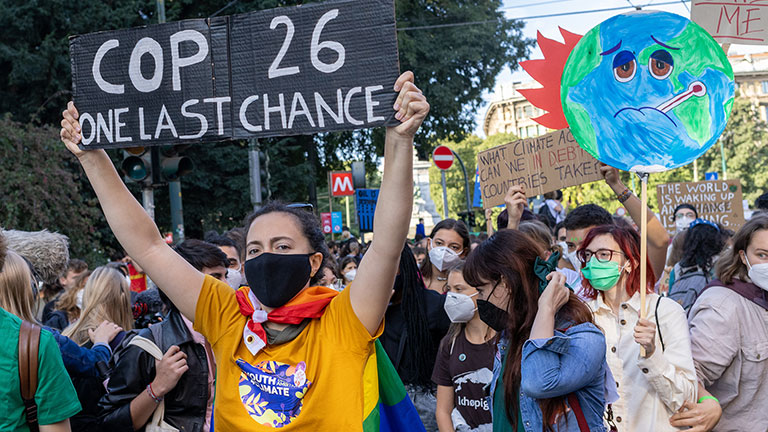 "It's significant that the US and China are willing to work ...

December 2021
Update Required To play the media you will need to either update your browser to a recent version or update your Flash plugin.

Listen to this podcast via Spotify | Apple Podcasts | Google Podcasts

How can we evaluate the final agreement that states reached last month at the UN Climate Change Conference in Glasgow (COP26)? How can we rate the level of ambition of the agreement, and was a higher degree of ambition possible? What is the value of the bilateral US-China declaration announced in the second week of the conference? Marie Vandendriessche, senior researcher at EsadeGeo, discusses the aftermath of COP26 in this EsadeGeo Exchange Podcast

Do Better: Although UN climate change conferences are held every year, the 2021 edition was a special one, since countries were due to submit new plans to try to reach the very urgent global climate goals. Was COP26 the last chance to tackle climate change through international cooperation?

Marie Vandendriessche: It’s very important to mark the urgency of this conference, but framing it as the last chance is risky, because if negotiations don’t meet the level of ambition that we need, what do we do? Do we despair? Do we go to the mode of inaction? That is not desirable either. On the one hand, time is indeed running out to take action to address climate change in order to avoid its most catastrophic effects. On the other hand, though, it would be counterproductive to despair and therefore do nothing because these massive negotiations involving almost 200 countries do not reach the ambition necessary at the peak of the conference. What we really need is action at every single level. We need it at this COP conference, we need it at national level, at city level, at company level, and at individual level. Every little bit helps.

Do Better: The analysis of the conference in the media highlights that this encounter was extremely necessary but that it has not solved many practical questions. Would you agree with this statement?

Marie Vandendriessche: If the question is: did COP26 succeed in limiting global warming from 1.5 degrees – which is the most ambitious goal in the Paris Agreement, then the answer is no. But did it bring us a little bit closer to that goal? And did the ambition of countries increase? The answer is yes. So, I think we need to take a balanced perspective on this. If we look at it from a global governance point of view, we can say that COP26 was mildly successful. One of the ambitions of COP26 was to finalise the rules for the implementation of the Paris Agreement. Because six years after the Paris Agreement, there were a number of implementation rules that still needed finalizing – such as the international carbon market. This was a major critical problem at COP25 in Madrid two years ago, and the Glasgow negotiations were able to find an agreement on this and some other points for implementing Paris.

We also achieved a political ‘cover’ agreement for the entire negotiations which includes two important elements: firstly, it’s the first political agreement in this kind of context that mentions particular fossil fuels, so there’s a mention about phasing down coal power generation and inefficient fossil fuel subsidies.

The second point that we need to highlight is that the Glasgow outcome has increased the rhythm of the Paris Agreement. So, where countries, according to the Paris Agreement of 2015, were supposed to deliver new plans every five years (by 2020, 2025, etc.), Glasgow has requested countries to submit a new and more ambitious plan in a year’s time, by the next COP, which is in Egypt in November 2022. So that’s accelerating that rhythm of ratcheting up the ambition, and I think that’s a recognition of the urgency of this COP and the fact that the ambition was increased at this conference, but it’s not enough. I think it’s important that we highlight that point, and I also think that it’s something that will cause difficulties in 2022, because boosting that ambition in one year’s time for countries is not going to be simple.

Finally, coming back to the increase in ambition, it is important to point out that prior to the conference, calculations showed that all the national plans were adding up to a projected 2.7 degree temperature rise by the end of the century. If we add the new pledges made during COP26 and if those are all fully implemented, we may be headed for a 2.4 degree world. A 0.3 degree difference may not seem like a lot, but it is in the context of climate change. Other sources in fact projected an even better result during the conference – an increase under 2 degrees – but we should be cautious with these projections, since much hinges on the actual implementation.

Do Better: Is the Paris model the right one?

Marie Vandendriessche: To understand the Paris model, we need to look at the history of the UN climate negotiations. The Paris Agreeement came about after a series of attempts to agree other models. The first model that came into play when we are talking about global governance of climate change was the Kyoto Protocol. That was a somewhat classic model where 37 developed countries were assigned individual emissions goals, and there was a compliance mechanism to measure implementation, and so on. It took a long time to put that into practice, and once it did enter into force, it was clearly necessary to move beyond that model. We can’t just have a small set of developed countries reducing their emissions, especially when the balance of emissions is changing due to the shifiting weight of the global economy. At this point, countries started to talk about doing a Kyoto type model, a top-down model, for all the other countries of the world. And they worked towards that model – a universal, legally binding model – and failed. Countries would not accept that these limits were placed upon them.

This is where we started to see a different strategy emerge. We started to see a model where countries were willing to work on climate, but not if it was obliged from the top down. So, what we started to see was a bottom-up model. Each country submits their own plan, and the idea is that collectively the plans are supposed to add up to a global goal. The Paris model is precisely this – a hybrid model. There is a global goal, and the global goal is that we need to limit the global temperature rise to 1.5 or 2 degrees Celsius above preindustrial levels, but the way to achieve it is not by obliging countries to take on specific reductions, but by countries making commitments from the bottom up, based on what they are willing and able to do. Now the question is, of course: is there going to be a gap between the goal and the sum of those plans? The answer is yes, there is a gap. But with the ratchet mechanism of Paris, we can scale up that ambition. So, is this the right model? It is the model that was feasible with all these countries at that moment in time – and it can work if countries put the right amount of ambition into it.

Do Better: Developing countries need economic support to mitigate their emissions and adapt the effects of climate change. Can inequality in this context lead to a geopolitical conflict?

Marie Vandendriessche: This question points to the issue of historical responsibility, which has been central to UN climate change negotiations right from the start. One of the specific issues at COP26 was related to finance: developed countries had promised to deliver, by 2020, $100 billion per year in climate funds to developing country parties. But 2020 passed by and that commitment has not been met. Understandably, developing countries see it almost as a precondition for further action that this finance is delivered. At COP26, it emerged that this target is going to be met by 2022 or 2023, but obviously it was a disappointment that it wasn’t met on time. Now, even if this goal is met by 2022-23, it’s clear that the future financial needs are going to be even greater than $100 billion.

It was agreed at COP26 that a new climate finance goal will begin to be negotiated after 2025 – and that is probably going to be a different number and a different format. An important component is how much of that finance goes to adaptation, and how much goes towards mitigation. Classically, most finance has gone towards mitigation, but as the effect of climate change takes hold, adaptation becomes ever more critical, and therefore, a different split is going to be needed.

Do Better: The United States and China announced an agreement to reduce emissions at the conference. Is it a credible agreement?

Marie Vandendriessche: This joint declaration was certainly a surprise, and perhaps mainly for its timing. We all knew that John Kerry, United States special presidential envoy for climate, had already been working for a long time with his Chinese counterpart to achieve such a joint declaration. However, no joint declaration was made ahead of COP26, and so it was a surprise when it finally did arrive, in the second week of the negotiations. I would say that the declaration is important – but mainly for symbolic reasons.

Let me compare this for a moment with the declaration that was made in 2014, prior to the Paris Agreement. At this stage, in 2014, President Obama of the US, and Xi of China, together announced their national plans to work on climate change. And this was really a momentous occasion. For the first time, the number one and number two emitters in the world, both historical and current (but in swapped positions) were jointly announcing while they would work to tackle climate change. It was a moment when China took on its international responsibility in addressing this issue even though at the very outset of the problem it was not a great contributor to it. And it was very much a signal to emerging and developing countries that said we have the number one and number two emitting countries on board – a developed and an emerging country – so let’s go ahead.

Now, the situation in different. As you know, former US President Trump left the Paris Agreement. After this announcement, China stepped up to some extent, and continued its commitment to UN climate change negotiations – even though the US was absent. China even unilaterally announced a net zero goal by 2060. There’s a major difference compared with 2014. Both the US and China are now committed to climate action – although there are domestic impediments to implementation on both sides. Nevertheless, the US and China declaration still has symbolic importance as a motor for the negotiations and a push to move them forward. When we go into the meat of the declaration itself, of course it’s necessarily vague, and it does not contain many concrete figures. However, it is very good news that Washington and Beijing will be cooperating on specific issues, and one of them is methane. China did not sign the global pledge on methane, but in this bilateral declaration, it did say it would start to work on a national level to address methane emissions. So, overall, I would say it is a good sign, it’s symbolic towards negotiations and it is also symbolic that the US and China – despite their many differences and rivalries – are willing to work together on climate change. This has great importance for the entire world.