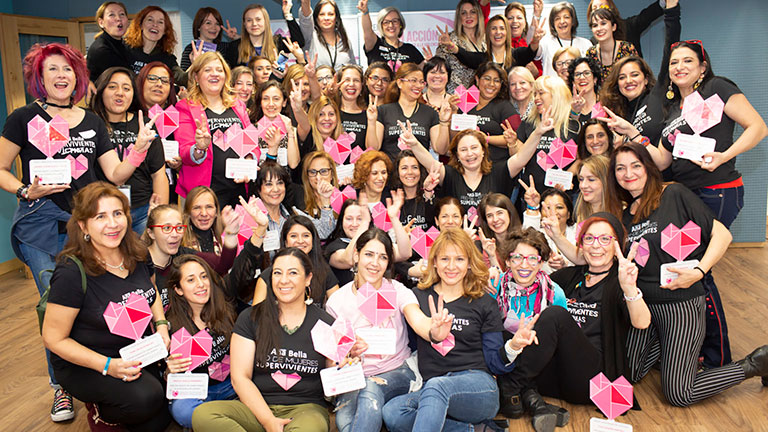 "The higher the victims’ social, educational, economic or professional status, the more invisible they are"

Fundación Ana Bella is a charity foundation created in Spain in 2006. Its mission is to co-create an egalitarian society free of violence against women. Within the framework of Esade’s Sustainability Week, Ana Bella, the organisation’s founder, met with Esade students to raise their awareness about gender violence and the need to promote equality. We interviewed Ana Bella to learn more about how the foundation is moving forward to achieve its goals.

How did the foundation come about?

My husband used to tell me that he hit me because he loved me. No one helped me for eleven years; nobody realised that he was abusing me, not even myself. I remember seeing news items about women who were killed and I would wonder why they didn’t just leave their abusers before they killed them, all this without realizing that I was also a victim. In 2002 when I left the women’s shelter, I told my story on TV, about how I had overcome my situation. I did this without hiding my face to encourage other women to break the silence. I wanted to tell them that there was an alternative to being killed, and that alternative is being happy.

How did you go from being a support network to an institution with global reach?

The day I appeared on television, more than a thousand women asked for help. The first one I helped stayed with me in my home, and then she helped others. And that’s how we created Fundació Ana Bella in 2006. We’re a network of survivors who have been able to turn our suffering into experience and empathy, as friends, to help 42,000 abused women in Spain. We help them to break the silence, to feel empowered with a decent job and to be happy. There are now 27,000 of us acting as agents of change in 82 countries.

How does co-creation work in the context of the fight against gender-based violence?

We don’t fight but, rather, work towards an equal society, involving companies, the media and educational communities as agents of change. We co-create social solutions to meet business needs that provoke systemic changes in favour of equality. We open job channels in areas in which women are underrepresented or where survivors of gender violence have never been able to access, for example, the first lorry driver to descend into an Andalusian mine, women programmers, the first female travelling salesperson at Bimbo and brand ambassadors that increase sales for companies such as Danone, Ferrero, Pepsi, Chanel, etc. We also launch calls to action throughout companies’ value chains for all the players to become involved as agents of change, for example, through the Céntimos Solidarios (“Solidarity Cents”) at Eroski. In addition, we also train employees on how to prevent gender violence, detecting and supporting their co-workers who are being abused by their partners or launching action protocols which go well beyond what the Law requires. For example, IKEA’s protocols include 27 measures which complement the legally required ones. By co-creating with companies, we’re accelerating social change and ensuring that the workplace is a safe space in which women can break the silence.

What role do you see for education as an agent of change to stop gender violence?

I earned ten academic distinctions while I was studying; I learned how to resolve multiple integrals by hand and even how to say the Lord’s Prayer in Greek, but they never taught me to love myself. If we teach values in addition to concepts, we’ll have happier generations with healthy relations. By educating them through social entrepreneurship, they’ll also be able to join the labour market as agents of change.

What does your collaboration project with educational institutions consist of?

We carry out co-creation processes so that the entire educational community becomes an agent of change through different actions. We promote the creation of support groups consisting of students and we provide workshops co-created with YSL, “Abuse is not love”. Only 1 in 3 young women see that their relationship is abusive. When I didn’t even realise that I was being abused, how was anyone else going to be able to help me? Well, through my male and female co-workers with whom I spent 8 hours every day. Through testimonials from young survivors and examples of women overcoming their situations, we teach them what gender violence is, how it is expressed, the warning signs to detect that violence when it’s affecting you or a classmate and how to help break the silence. After this training session, 10% of students ask help either for themselves or a classmate. These sessions are a call to action for participants to begin to serve as agents of change against gender violence.

Based on your experience, how important is it to raise awareness amongst young students at a university like Esade?

Women without higher-education degrees take eight years on average to ask for help, while professionals or those with doctorates take almost thirteen years. That’s why it’s crucial to act in educational spaces like Esade. The higher the victims’ social, educational, economic or professional status, the more invisible they are, because society, instead of condemning the abusers’ behaviour, questions the victims’ professionalism: “How did you, as an Esade student, a lawyer, judge, doctor, mayor, president, not realise your partner was abusing you? How did you let him do that to you?”

What other types of institutions do you work with?

How do you combine outreach and awareness-raising in your workshops?

We support our work on positive testimonials from women survivors so that we can be present in all communications media and for society to understand that we are not the problem; we’re part of the solution. We want to make it clear that we’re not killed by gender violence but by men who exercise that violence. The focus has to be on the abusers and not the victims. And we have to succeed in making sure companies understand that. If we’ve overcome that abuse, we’re not victims but survivors; we’re very strong women, used to working under pressure, who quickly bounce back from failures, capable of withstanding frustration. We don’t quit when faced by failure. In fact, we’re successful, persevering women because we want our marriages or relations to work and we reinvent ourselves every day to keep on going. These tools, which helped us to resist and overcome abuse, make us effective employees when focusing those tools on work, capable of contributing to our companies’ economic and social development.

Through a co-creation process with the institutions in which the community’s entire value chain can take part. For example, in the Alba Plata de Fuente High School in Cantos (Badajoz), they’ve created the Atenea Committee. Students have organized themselves to train the entire school, including teachers, staff, parent-teacher associations and the surrounding community. They’ve created a support group for young women which is available beyond school hours. Other schools in Extremadura have since replicated this through Red Minerva (“Minerva Network”). This project earned the Learning Service Award for Gender Equality sponsored by Fundación Ana Bella and the company, Mullor.