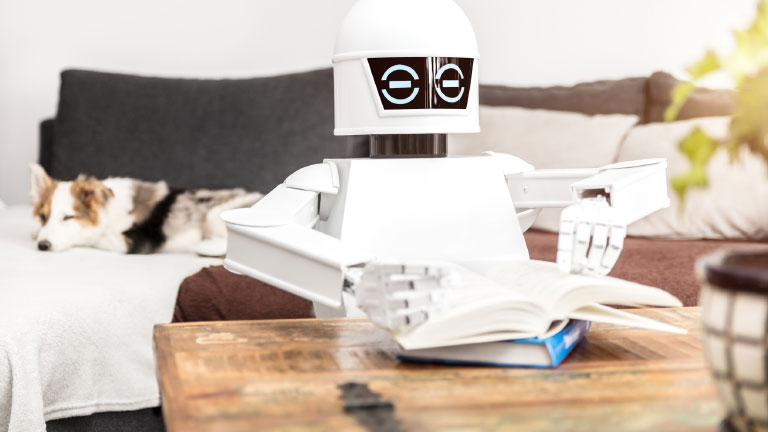 Josep is a scholar of technologies and how they might influence our future social lives. One of the most developed technologies in recent times is that of robots. Robot comes from the Czech robota and means work, or hard work.

According to Josep, this is the best characterisation of what a robot is: an ingenious machine that helps us think about what it is that makes us human.

There are many types of these ingenious machines: some with no autonomy (for example, assembly line robots that simply repeat actions) and others programmed with artificial intelligence (AI) capabilities that endow them with a degree of autonomy to solve problems.

The most advanced robots are AI-programmed machines which more or less resemble the human form. In fact, robots with artificial intelligence can apply programs much more effectively than humans; for example, there is currently no human on Earth that can beat an AI chess program.

There are also robots that process spoken human language in all its complexity, including double meanings and irony. Therefore, if what made us human was the ability to effectively solve rational problems based on programs, then robots would not only be humans, but superior to humans…

But in addition to intelligence, humans have the capacity for intimacy with other humans. This intimacy is related to our body and its history: it is “incarnate consciousness, experience in the first person, in mind and body” (Marco Schorlemmer, Artificial Intelligence Research Institute - CSIC).

Our human corporality and its history allow us to connect with our intimate nature and with that of others: with their physical history, their psychological history, their social and cultural history. I do not think robots can connect with human intimacy, as they lack bodies of flesh and blood that have grown with and possess these histories. As sociologist Sherry Turkle says, “There will never be an age of artificial intimacy.”

There are robots that process spoken human language in all its complexity, including double meanings and irony

Secondly, humans are conscious of the free origin of their existence. I am conscious of the fact that I was conceived through an act of intimacy between my parents, and grew up thanks to repeated acts of intimacy towards me from my family, my friends, my school, etc. Conscious that I have not been designed or educated for an exclusively utilitarian purpose. And it is this consciousness that allows me to experience joy and the joy of other human beings, despite the inherent limitations of my body and the mistakes that I make – errors that a robot would never commit.

Thirdly, humans are able to meditate; that is, to perceive intimacy and the freedom of their origin in a deep and profound way:

“As humans we are able to silence ourselves, to detach ourselves from our thoughts, our images, our models, and it is in this absolute silence that the freedom and creativity of reality fully shines, and we let it wash over us. Computational information processing systems will always be this: information processors, unable to detach themselves from form and embrace non-form, non-duality. In short: artificial intelligence does not meditate”. (Marco Schorlemmer).

Robots can only project and improve our rationality, not our intimacy

After all, as Mia Levitin says, “The risk is not that there will be robots that resemble people, but that people begin to resemble robots.” The risk is that, in the name of rationality, we will expel the intimacy from our relationships (corporality, freedom, silence-meditation), which is precisely what makes them profoundly human.