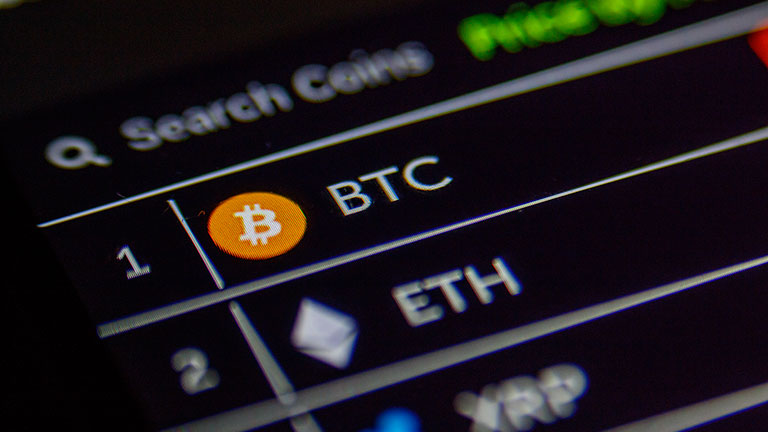 Blockchains have the potential to transform the foundation for all kinds of transactions—improving their reliability and efficiency. Proponents see parallels between what blockchains can do to improve transactions and asset tracking and what the Internet has done for information flows—indeed they even see it underpinning a transformation of the Internet (Web3). But the best-known blockchain applications (cryptocurrencies and non-tangible tokens for art collectibles) are in niches, speculative and with more bubble than steadying potential. Does it make good business sense to jump now on the blockchain wagon or better to treat the current stage as an experimental episode worth watching—at arm’s length?

Virtually any assets can be traded or tracked through blockchains—be they tangible (such as land or art objects) or intangible (such as patents or copyrights). The name comes from this computer-based distributed ledger technology’s approach—setting out data in successive blocks with each block verifying the content of the previous one. Blockchain-based trades can be executed very fast, and—under certain circumstances—transaction costs can be much lower than for conventional trades.

Blockchains provide immediate, transparent and auditable information stored on an immutable ledger. In addition, a set of rules (or ‘smart contracts’) can be stored on the blockchain and executed automatically. These contracts are enforceable either via tamper-proof execution of computer code or by legal enforcement of rights and obligations (though they may not always amount to conventional legal contracts, as regulatory regimes specifically applicable to blockchain transactions are still nascent).

Virtually any assets can be traded or tracked through blockchain

The potential of blockchains for business is related to the trust generated by the distributed ledger being shared, immutable and able to reliably treat each transaction or asset uniquely. A blockchain network can track orders, payments, accounts, production and supply chains. Operations often waste effort on duplicate record keeping and third-party validations. Record-keeping systems can be vulnerable to fraud and cyberattacks. Limited transparency can slow data verification. And with the arrival of IoT, transaction volumes have exploded--all of this creates fertile ground for a solution like what blockchain purports to offer.

Key to the appeal of blockchain is that those that are allowed access share a single view of the truth and can see the full transaction path—offering greater confidence, as well as new efficiencies and opportunities. Access is what differentiates the two main types of blockchains: public ones, like Bitcoin, are open to anyone with an internet connection; the main characteristics of private ones (permission or consortium-based) is that they limit access to their members.

The broad category of crypto assets which have been evolving in recent years to serve a variety of purposes ranging from speculative investment, store of value, currency conversion, and payments (including the possibility of sheltering them from scrutiny). Total market capitalization crypto asset values peaked at close to $2 trillion in the third quarter of 2021 and have continued to exhibit much volatility. 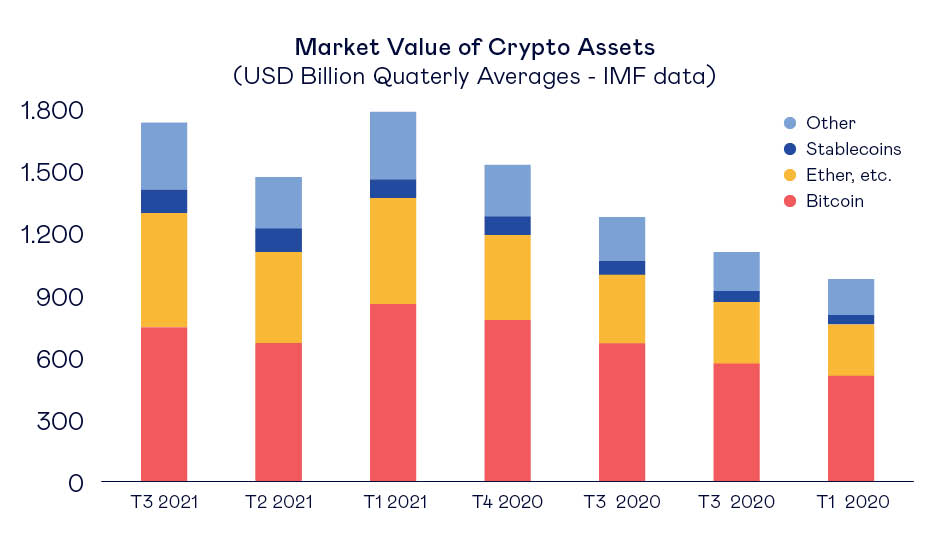 As the IMF has flagged, crypto asset risks require close monitoring given the global implications and the inadequate operational and regulatory frameworks under which they operate in most jurisdictions. The challenges posed by the crypto ecosystem include operational and financial integrity risks from crypto asset providers, investor protection risks for crypto assets, and reserves and disclosure for stablecoins.

Bitcoin (and the undercover genius behind it) has been the trailblazer and until 2021 accounted for over half of total crypto asset value. By-design scarcity and strong following have been major factors behind its price explosion while its future is clouded by the role it plays as a conduit for illicit funds, questions about whether it is a reliable store of value and by the enormous energy requirements of Bitcoin mining—which has been described as a process of competitively wasting electricity. Whatever its fate, Bitcoin has undoubtedly paved the way for a huge wave of crypto finance innovation and of blockchain use more broadly.

Bitcoin’s market share has been declining steadily mainly at the expense of Ether and other platforms with smart contracts. Ether is the currency of the Ethereum blockchain around which a rich crypto ecosystem is growing rapidly. It is this ability to spawn an new digital ecosystem that has encouraged the more utopian views of the blockchain leading to Web3.

While cryptocurrencies have been by far the most prominent crypto assets until now, platforms like Ethereum are opening the door to a wide range of other crypto assets. These are often called “tokens” (digital entries on a blockchain ledger recording ownership or some other entitlement) which may represent control over a resource native to the blockchain or a “real world” asset.

Platforms like Ethereum provide a foundation on which "non-fungible tokens" (NTFs) can be deployed. NTFs are basically digital assets with unique identification codes and metadata recorded in a blockchain ledger representing the ownership and authenticity of an associated unique tangible or intangible asset. NFTs are digital assets that are traded online, often with cryptocurrency, and are generally encoded within smart contracts on a blockchain. They contain within their code information that describes the properties of each token that make them different to others; for instance, a piece of digital art might have coded information about individual pixels.

Almost any unique asset can be represented by an NFT – real art works, houses, cars, bottles of wine, as well as digital assets such as images, documents, videos, and tweets. The potential is there for blockchains and NFTs to serve many purposes—useful or playful. So far, the most prominent (and colorful) NFTs have been art works (in a very broad sense of the term ‘art’), so it is worth taking a look at their evolution.

NFTs allow collectors to value digital art in a similar way to physical art, creating thus new opportunities for digital artists. Anyone can theoretically copy a digital file as many times as they want, including the art contained in an NFT; however, NFTs are designed to offer something in the digital domain that is protected from replication: ownership of the work.

Following an initial burst in 2017 (with CryptoKitties playing a major role), the size of the NFT market had remained substantially stable until July 2020; and since then the market has experienced dramatic growth fueled by the success of a few projects using the Ethereum blockchain and by a few high-visibility individual art sales. 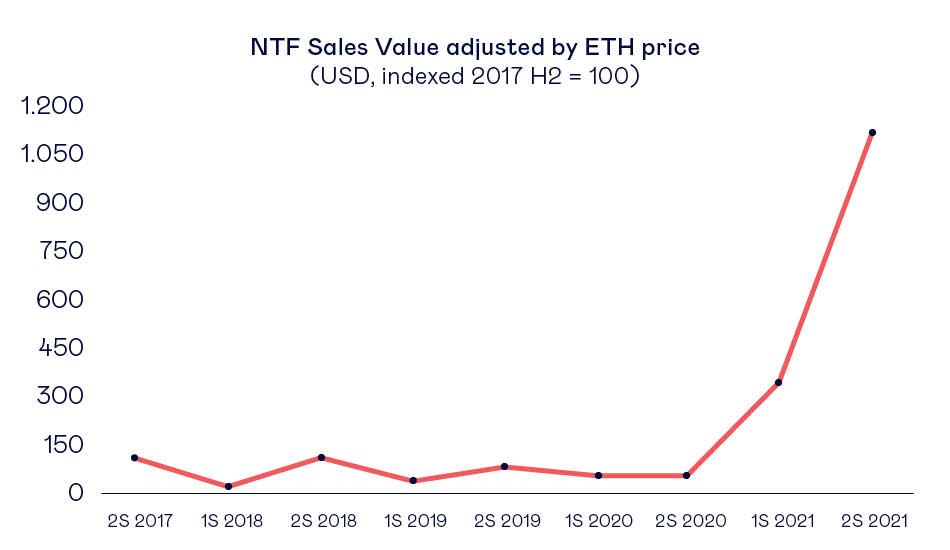 Total sales (in USD) since mid-2017 have amounted to almost $15 billion (with much of that accounted for by the recent increase in the ETH price). The rise in value reflects a peculiar demand impetus and is not just due to the 2021 price increase of Ether (the cryptocurrency used in Ethereum), as can be seen in the chart which shows ETH- deflated values.

Ten NTF projects, according to nonfungible.com data, accounted for well over half of the sales value, their sales amounting to over $8 billion. The top three projects (CryptoPunks, Axie Infinity and Bored Apes Yatch Club) each accounted for about one-eighth of the value of all NTF sales. 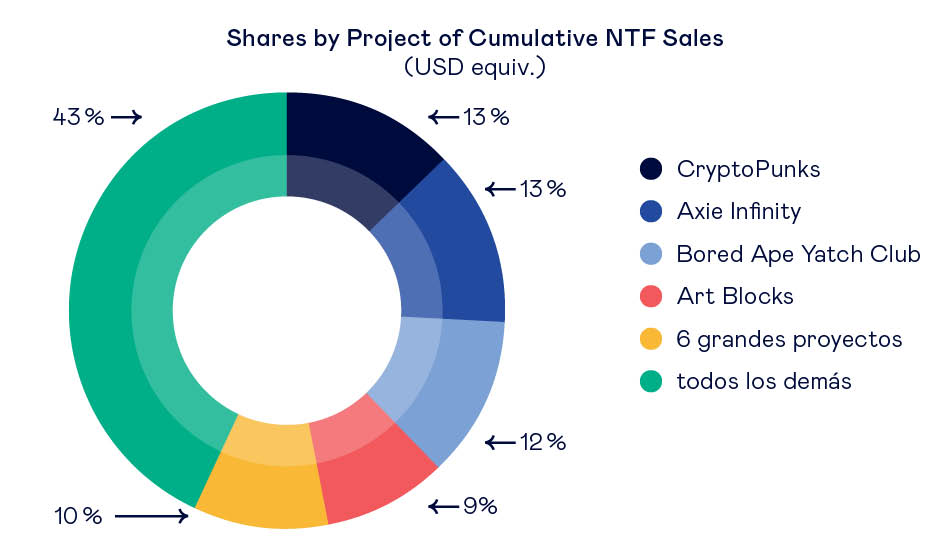 For instance, there have been ten sales above $1.5 million each of Bored Ape images—hard to fathom by looking at the images in question. The top three sale prices have been for CryptoPunks (trading at over 2,000 ETH or $8m each)—these are avatars that could be picked up for free originally but just 10,000 of them were generated by an algorithm in 2017, creating an artificial rarity that has somehow become valuable (at least as long as the bubble lasts).

Bitcoin, CryptoPunks and other exuberant applications of blockchain may or may not turn out to be niches or ephemeral but whatever their stamina they have already helped to learn valuable lessons about the operability and scalability of blockchains and could well have paved the way for valuable applications distributed ledger applications, even if they are grayer and more mundane ones.

Today’s NTFs are likely to represent a first step towards new tools to deal with asset property and provenance and service provision. NTF-type tools in public blockchains could, for instance, be useful in verifying licenses and certifications or facilitate fractional ownership of real estate--making it possible to unlock the value of previously illiquid assets. For the financial industry they could provide a basis for regulatory compliance in the context of due diligence and know-your-customer authentication, and offer a method to store information in a secure and tamper-proof way—something that could also be very valuable in health care.

Private blockchains also could offer considerable potential, including to manage supply networks and safeguard transactions, and become and integral part of all kinds of business processes, improving their efficiency and reliability especially when multiple parties need to share, update and trust jointly used data or where many verification steps are involved.

This is something very much in flux. Current incarnations of blockchains may need to still be treated as trial runs but they bear watching—even without indulging in utopian views of their potential--because they could transform business process management to improve operational efficiency, provide resiliency and—where designed to fit appropriately—become a new source of competitive advantage.