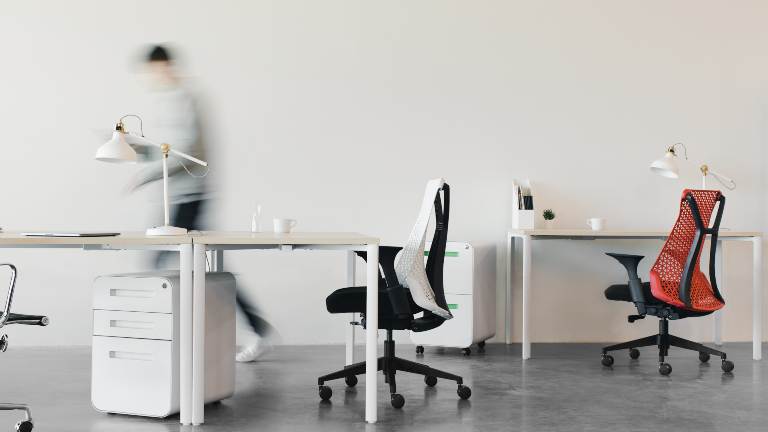 The “war on talent” is a term that has been widely used for over 20 years—and abundantly hyped as a “megatrend”.  Talent management is not consistently defined: sometimes it refers broadly to competitive employee recruitment, development and retention strategies; other times it is more focused on knowledge-intensive jobs.  But there is a substantive dynamic at play affecting organizations of all types that is becoming more complicated with the spread of Artificial Intelligence (AI) applications.

The relationship and boundaries between capital and labor have long been the focus of attention—for social, political and economic reasons—and recently it has been part of analyses on inequality.  The relationship and overlaps between labor and talent have not received as much explicit attention but it is worth examining it because of the inequality implications of the polarization of labor markets, including through the impact of the growing adoption of AI applications.

The relationship (or struggle in Marxist terms) between labor and capital was a central feature of the industrial capitalism that characterized much of the 19th and 20th centuries.

The relationship (or struggle in Marxist terms) between labor and capital was a central feature of the industrial capitalism that characterized much of the 19th and 20th centuries. The most recent decades have been called, in parallel terms, as a period of managerial capitalism or, using different semantics, characterized by the growing importance of the knowledge economy.

The labor share of national income is the most common indicator of how that relationship has evolved—but it is plagued with measurement and comparability challenges (including the role of small business proprietors and self-employment) that have attracted much attention by academics.  A very coarse summary of a lot of research is that the labor share in many countries had been fairly stable since the second world war and appears to have declined since the 1990s—albeit with cyclical ups and downs—as the example of G7 countries shows.  But detailed analyses of the apparent decline in the labor share in the US have questioned whether it has been significant, or the data used in those studies influenced by measurements that do not reflect adequately the composition of labor income—especially the labor component of small business income. 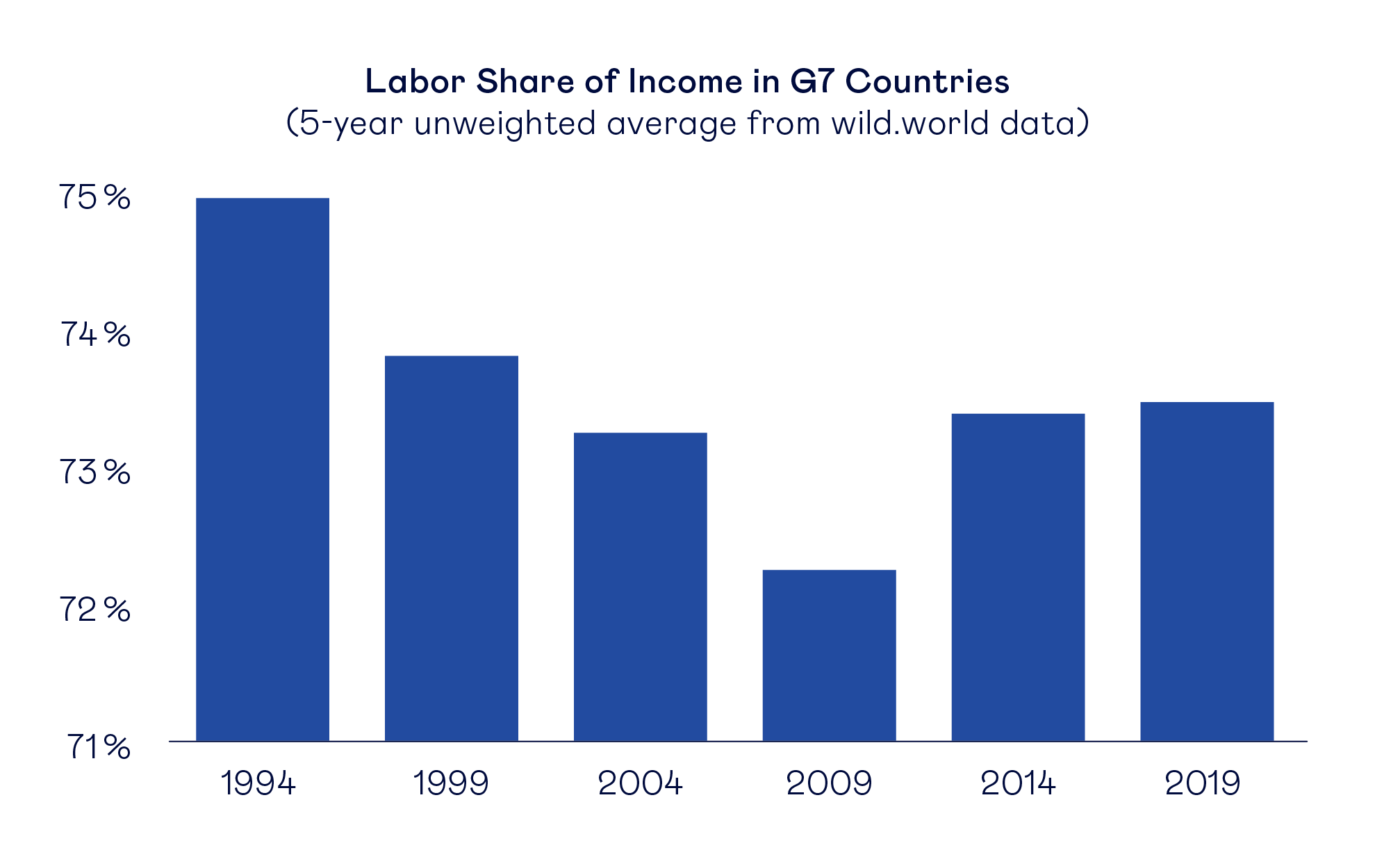 OECD data show a 2-3% average labor share decline in its member countries over the 1995-2017 period—though behind this average there are significant country differences (with, for instance, Australia, Japan, Korea, Poland and the US showing significant declines, and France, Sweden and the UK showing increases).  Other recent studies (notably including the work of T. Piketty) have also shown how the share of capital has increased internationally—and focused on the inequality implications of that trend.

There are now signs that the economic reactivation as many countries emerge from the 2020-21 pandemic lockouts may be resulting in an uptick in the labor share through wage pressures.  All in all, it seems that the labor-capital relationship is not where the main current insights are to be found and that it is within labor itself where major changes are happening.

Skill levels are an important differentiator, but increasingly how tasks are exposed to displacement by automation and AI applications is becoming a factor.

A key distinction to be made is around talent (high-skill, high-demand) and other labor—although the boundary between the two is an elusive one.  Skill levels are an important differentiator, but increasingly how tasks (and related skills) are exposed to displacement by automation and AI applications is becoming a factor.  This may affect the labor/capital relationship, but it could actually be affecting even more the configuration of the labor element and the segmentation (even polarization) of the labor market. 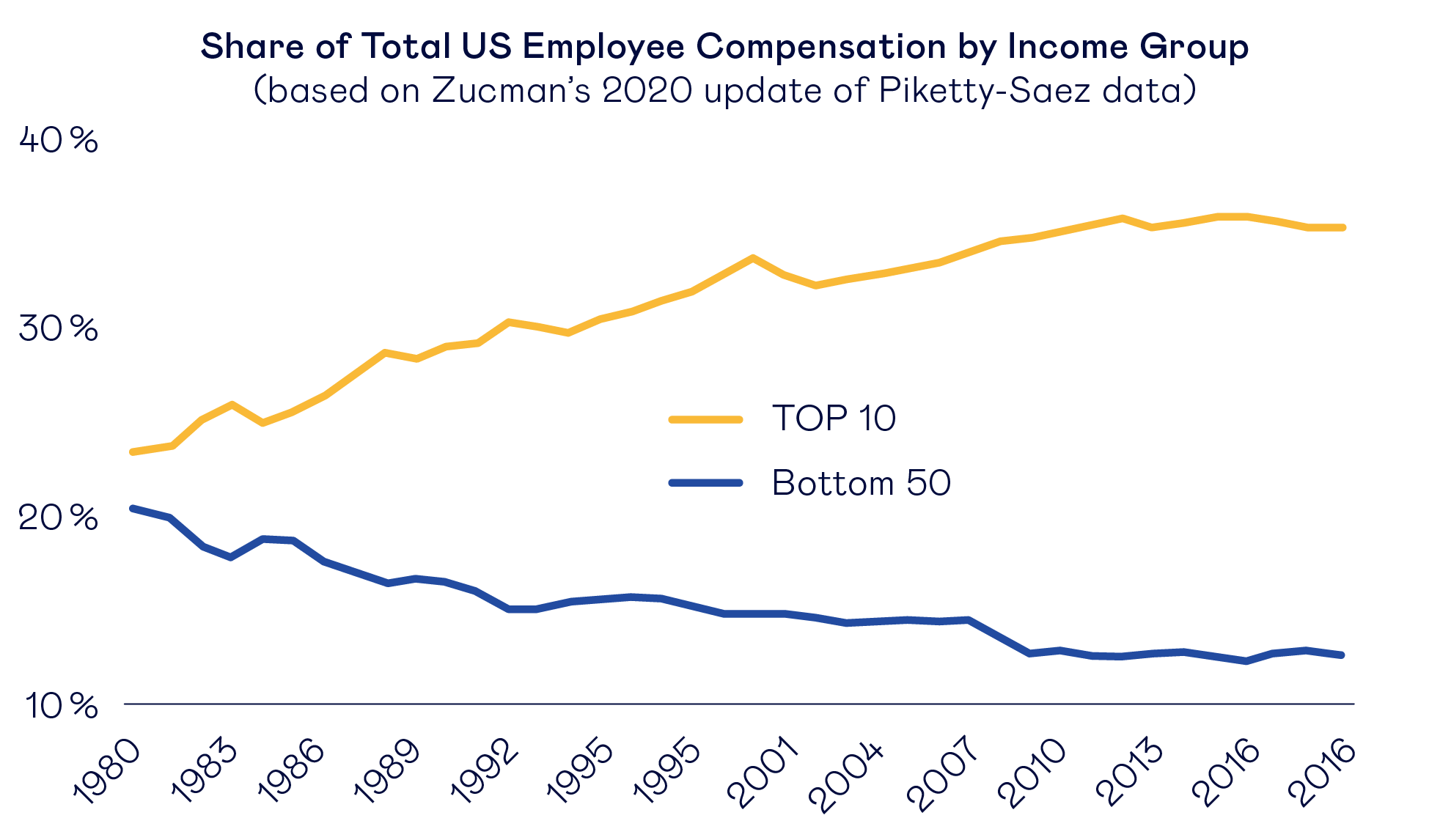 An insight into this dynamic—and the major labor market segmentation and inequality implications it entails—is gained by looking at shares of the total amount of employee compensation in the US accruing to households in the top 10% of the income distribution and to the bottom 50%.  In 1980 this gap was only three percentage points (24% for the top 10 and 21% for the bottom 50) but the gap grew steadily and by 2019 it had reached twenty-three percentage points (as the top 10 received 36% of total employee compensation and the share of the bottom 50 dropped to 13%).

Traditionally in the struggle between capital and labor capital has had the upper hand when the main source of value for most companies has been the assets that they owned and controlled. This is the case, for instance, with machines and assembly lines, with real estate locations, or with things like beverage formula and brand. Routine tasks and the related threat of automation have kept pressure on wages down, although the situation of varies greatly by country given demographic growth, labor participation rates, trade union activity, availability of capital and other factors.  In countries like the US the result seems to have been stagnant wages for low-skill labor.

Attracting employees with relevant skills and figuring out how best to leverage their inputs becomes a critical source of competitive advantage.

In contrast, in the growing number of industries and activities that constitute what is often called the knowledge economy—the relative power of labor/talent and capital are different.  In high-tech companies, in finance and many professional services that sell tangible and intangible products and services with major knowledge components hard assets matter less than skilled, talented people. Attracting employees with relevant skills and figuring out how best to leverage their inputs becomes a critical source of competitive advantage.

Often capital is plentiful, but talent is scarce. In the extreme it is star-quality talent that commands ever increasing compensation—whether it is large corporation CEOs or players in the European football leagues that we are talking about.  But Silicon Valley, Wall Street and “premium” management consulting firms offer quite abundant, less extreme examples of this growing class of highly paid employees.  The recent boom in Special Purpose Acquisition Companies (SPACs) could be seen as manifestation of this dynamic—in a double sense.  On one hand, high levels of compensation for SPAC promoters recognizes a supposed talent in identifying opportunities and, on the other, the acquisition targets for SPACs are intended to be talented entrepreneurs and product, service or process innovators.

Stagnant or barely growing wages for low-skill, routine jobs are part of the story of disparities in employee compensation within the labor force but the main driver of the disparity (as well as the reason why the labor share has not dropped significantly) is the ability of the more talented components of the labor force to attract increasing levels of compensation. Talent scarcity is of course what the “war on talent” discourses were about, and it is not surprising that it has resulted in enhanced compensation for a range of skills—ranging from managerial to high-tech and their intersection … but also for creative or “renaissance” types.

The story, however, does not end there.  Some of these talented people and the companies that have figured out how to attract, retain and successfully deploy them are also helping to create, through AI applications the next waves shaking up the labor market—affecting most types of job to some extent. 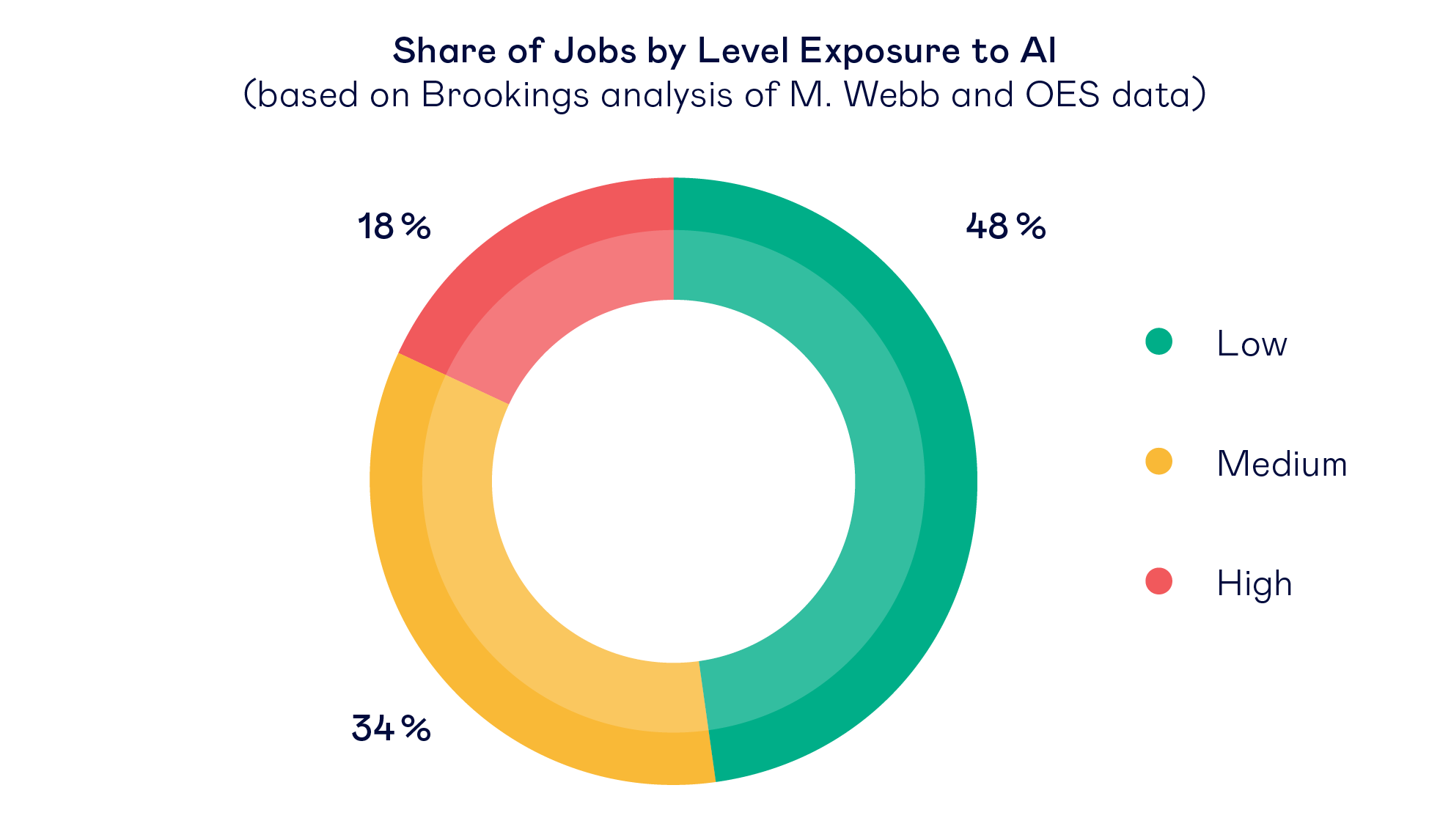 Talent demands are being redefined by AI with a three-pronged effect: certain types of knowledge jobs/tasks are made redundant by AI; expertise in AI development and applications becomes even more highly sought after; and talent that masters “digital-real twining” (using AI to make existing roles more effective) will become especially priced.

The AI effect is in its early stages and there is considerably uncertainty about how and when it will play out.  So far it is substituting for humans in a subset of tasks, but it is also generating demand for new activities and overall, not yet having detectable aggregate labor market consequences.  AI is a very different technology than other types of automation and because even less is known about AI than other types of automation, its impact and repercussions appear much more uncertain.  It is likely that it will affect many jobs and surely the jobs affected will involve a very different part of the labor force compared to earlier types of automation and AI might well impact some activities that today are seen as requiring high-level talent.  It remains to be seen if, how and when AI will transform—or even threaten—such jobs; its consequences will differ across industries and will not play out in an easily predictable way.

Managing the relationship between capital and talent for competitive advantage will be a significant challenge for most companies.

Managing the relationship between capital and talent for competitive advantage will be a significant challenge for most companies. This is not so much because of a war over scarce talent as because performance will increasingly depend on a fluid integration talent and AI (while it continues to also involve efficient integration between labor more broadly and automation).  Instead of the traditional labor following capital, for many activities the new success paradigm will involve capital following talent, including lifestyle considerations molded by the pandemic experience, as well as companies remaining pragmatically alert to AI and organizing to dynamically find the combinations of talent management and AI applications most appropriate to their competitiveness.