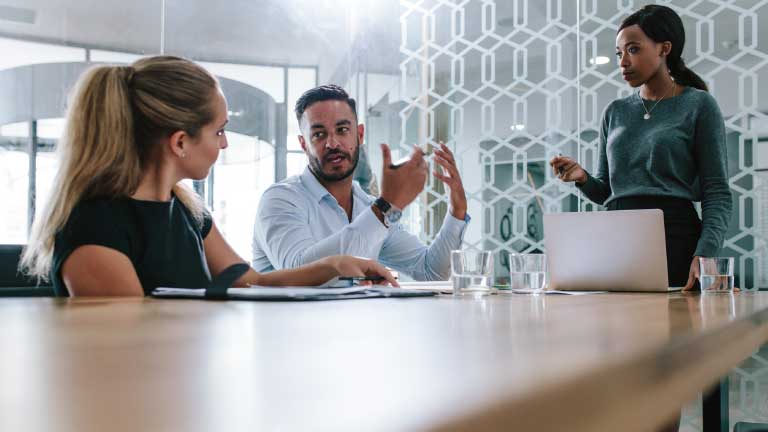 I recently stumbled upon an article that got my attention. I found it on a professional services firm’s website, in a slightly hidden section called “Succession." The headline was something like “How to retire without killing your wife."

The article clearly implies that the man is the only one who will retire and that the woman will be waiting for him at home when he does. The conflict will then begin when the man, who has always worked outside of the home, returns permanently and interferes with his wife’s realm, occupying space like a suspicious bulge.

The headline is unsettling, but it’s even more disturbing to see it on the website of a company that publicly claims that a commitment to diversity, inclusion and gender diversity is a part of its DNA. The first thing that comes to my mind is that the person in charge of the content for the “Succession” section was probably not the same one who wrote the “Diversity and Inclusion” section. And that the person who wrote this article lives in another era... or maybe not?

Despite advances in gender balance, there are still inconsistencies that will be hard to get rid of

Another example caught my attention a few months ago. A friend of mine received a gift – at home – with a note thanking her for supporting her husband’s career for two very complicated years, during which he was named best manager of a multinational company. There was no ill intent in this gift; quite the opposite. But I don’t know of any man who has ever received a similar gift. This made me wonder: What about my friend’s husband? Did he support her? I’m sure he did. She also works – a lot – but he has never received a gift of this sort. Somehow there’s still an unwritten rule that it’s the woman who supports the man in his professional career.

Although progress is being made in gender balance and inclusion policy plans, examples like these show that inconsistencies – both serious and subtle – still exist in gender-related issues, not only in companies but in society itself. These contradictions, in my opinion, will be hard to get rid of.

There is, however, something worse than these inconsistencies: women who are accomplices. For example, accepting free admission to a nightclub because you are a woman while men have to pay, or accepting an invitation to an expensive restaurant where the menu prices are visible only to men – I have to believe the person who told me this because I have no intention of going to see it with my own eyes. Or women in their early forties who say they will not go out with a man who doesn’t treat them (believe it or not, this is more common than I imagined).

There are plenty of examples of “micro-chauvinisms” – a controversial term coined in 1990 by the Argentinian psychologist Luis Bonino Méndez to describe a low-intensity, soft, familiar sort of chauvinism. It is impossible to fight against all micro-chauvinisms, because some involve no ill intent – they are just so deeply ingrained in the culture that it’s impossible to root them out. We have internalised them in such a natural way that we have become accustomed to them.

However, I believe it’s time to fight these micro-chauvinisms consciously in business environments where, fortunately, gender policies are being implemented and equality has become a strategic topic in the agendas of steering committees and HR departments.

I’m convinced that what matters the most is solving the gender wage gap, improving women’s career advancement, ensuring that no woman is trapped by the glass ceiling, and helping female talent overcome discrimination and make it to the top.

While working toward this future, we must pay attention to small details – like the ones I mentioned at the beginning of this article – to ensure that diversity and inclusion strategies are consistent with what companies preach.