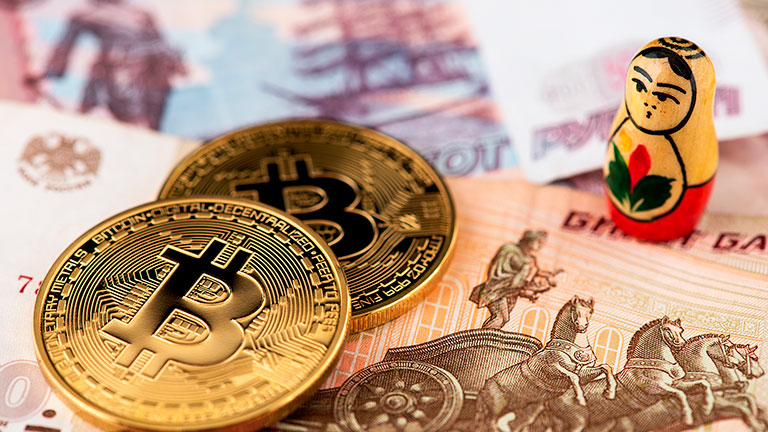 It has been two and a half months since the start of the war in Ukraine, a country that the Kremlin considers part of its sphere of influence and which it attacked in late February on the pretext of ‘de-Nazifying’ it. The strong resistance put up by the Ukrainian army – equipped in part with weapons sent by NATO countries – was bolstered almost immediately by most Western countries with a first major package of sanctions on the Russian economy.

Although further sanctions targeting the energy sector are still being discussed to reduce the revenue Russia receives from the sale of fossil fuels, the goal of the first sanctions imposed in response to the invasion was and remains to isolate the country’s financial system with measures such as removing Russian banks from the Swift system, freezing dollar reserves deposited abroad or, at the private level, the withdrawal of companies such as VISA or Mastercard from the Russian market.

One of the main targets of these measures was Russia’s oligarchs, in the hopes that the damage caused by the sanctions would prompt them to pressure Russian President Vladimir Putin to end the war. Within days, all the assets held by Russia’s largest fortunes in most Western countries were frozen, including bank accounts, but also real estate and even the yachts they use to summer on the Mediterranean coast.

But, with the banking system controlled by sanctions, the question becomes whether these oligarchs have alternatives that would allow them to dodge the sanctions and continue to access their fortunes. These potential alternatives include one of the most talked-about assets in the financial industry in recent years: cryptocurrencies.

‘Depending on where they are, it may or may not be possible to freeze cryptocurrencies. If they are in the hands of the oligarchs, they cannot be seized; it is like having gold ingots buried in the back garden. However, if they are held in an exchange, then the authorities can go to that exchange and seize them’, explained Eloi Noya, a lecturer on the online programme Innovation in Finance: Fintech and Blockchain.

The most popular exchanges in the West, such as Binance or Coinbase, have already announced that they have blocked the accounts associated with customers affected by the sanctions, but anything stored in private cryptocurrency wallets is beyond the reach of the authorities.

You can convert a thousand or five thousand euros in cryptocurrencies discreetly, but converting millions is impossible

Does this mean that the Russian oligarchs can continue to move these assets freely? To some extent. ‘If they already had wealth in cryptocurrencies outside the exchange circuit, they can circulate it as long as they can find someone to accept it. But right now it is very complicated. You can convert a thousand or five thousand euros in cryptocurrencies discreetly, but converting millions is impossible. For that, you need banks’, said Xavier Pérez Corominas, lecturer of the subject ‘Blockchain, NFTs & Metaversero’.

Companies such as Chainalysis detected peaks in rouble-denominated crypto trading in the week prior to the invasion, with more than 70 million roubles being converted to cryptocurrencies on 24 February (nearly 800,000 euros at that day’s exchange rate). Although that figure is four times the level of trade in the first days of February, the total volume does not suggest that this method has been used as an escape route to get roubles out of the country and evade sanctions.

Furthermore, according to Noya and Pérez Corominas, although such transactions could be made outside the usual circuits, they would still be reflected in the price of these assets. ‘And we have not seen a rise in the price of Bitcoin or other cryptocurrencies, but rather the contrary’, said Noya.

One trend that has been detected in recent weeks is the massive sale of crypto-assets, especially those deposited in Switzerland, to move them to countries viewed as ‘safer’ from Western sanctions. A report cited by Reuters in late March detected such movements, especially towards the United Arab Emirates, a country that has adopted a neutral stance in the conflict. According to Reuters, companies in Dubai have received requests to liquidate billions of dollars’ worth of crypto-assets in order to invest in real estate or move them to a safe haven.

For Professors Noya and Pérez Corominas, the cooperation of a country – and its banks – that does not enforce the Western-imposed sanctions is essential. ‘If you have cryptocurrency assets that have not been blocked, the only way to liquidate them is if there is a country willing to convert them for you in the name of another person acting as a front man. The country’s authorities know where the cryptocurrency comes from, but allow it to circulate’, Pérez-Corominas explained.

Another factor to consider is the traceability of these transactions, even if they are done outside the exchange circuit. The original cryptocurrency, Bitcoin, was first used on specialised Internet sites whose users wished to remain anonymous. It thus gained a reputation as a payment method for illegal activities, to the extent that a group of hackers managed to collect a ransom of 75 bitcoins a year ago after hacking into and blocking the control systems of the pipeline linking the Gulf of Mexico to New York. However, the FBI managed to track down these assets and recovered most of the ransom, casting doubt on the use of Bitcoin for such purposes.

‘Some crypto-assets, such as Monero, do allow absolute anonymity. But, contrary to popular belief, Bitcoin does not offer this kind of anonymity, because the traceability of transactions makes it possible to determine whose hands it has passed through’, said Noya.

Beyond the context of sanctions, cryptocurrencies have emerged as a fast and efficient way of sending aid to Ukraine. In the midst of a wave of solidarity unleashed by the Russian attack in late February, NGOs, volunteer groups and even the Ukrainian government posted crypto-wallets that anyone could donate to.

The response was quick in coming. In the first weeks of the war, the Ukrainian authorities received tens of millions of dollars in donations through currencies such as Bitcoin, Ethereum and even Dogecoin.

According to Noya, the speed and low cost of these channels are one of their main advantages. ‘There are people who have tried to wire money to Ukraine, a non-EU country, and the cost is very high. To send 100 euros, you have to pay a 30 euro fee. Cryptocurrencies allow you to make this transfer instantly and almost for free’, he said. Pérez-Corominas noted that it is also possible to make micro-donations of very small amounts, such as 10 euros, an amount that is not possible with international bank transfers.