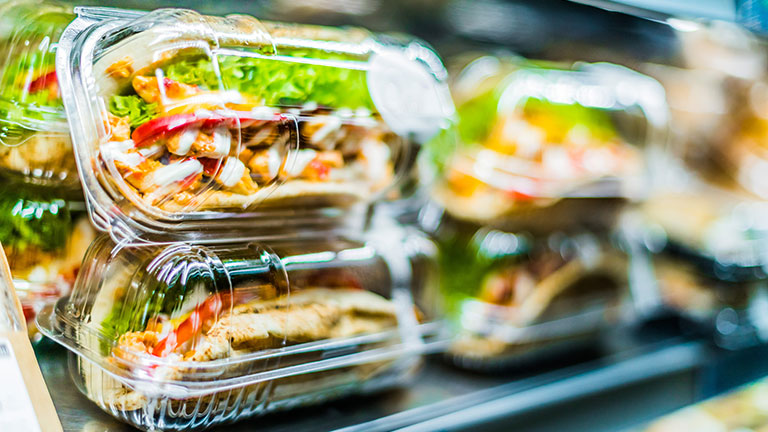 Foie Gras without ducks or geese? A French company is already producing it and the reason why there are good demand prospects is the growing concern with animal welfare—in this case, with force-feeding the birds to create a liver pathology. This may seem like a niche R&D effort, but it is just one of the more intriguing culinary manifestations of the wide range of efforts to produce animal products—or products that taste like the ones we used to get from animals—without slaughter. This explosion of trompe l’oeil products responds in large measure to demand for food that is healthier for the consumer, better for the environment and not harmful to animals.

Different consumer segments emphasize these three reasons differently for new dietary choices, but the effect is one of convergence and the generation of momentum behind new products. Their market share is still small, but there is every reason to believe that it will keep growing—how fast and how widely remains to be seen—and the impact on food supply chains (from land use and farm machinery and inputs to supermarkets and restaurants) could be enormous.

The questions are whether these three new forces for dietary change will have enough of an impact to reverse long-standing trends and whether they will take hold not only in high-income countries but throughout the world—especially middle-income countries where the bulk of the world’s population lives. Is the inertia of recent trends too strong, as FAO forecasts indicate, or are the new forces powerful enough to trigger an inflexion point with sweeping consequences? 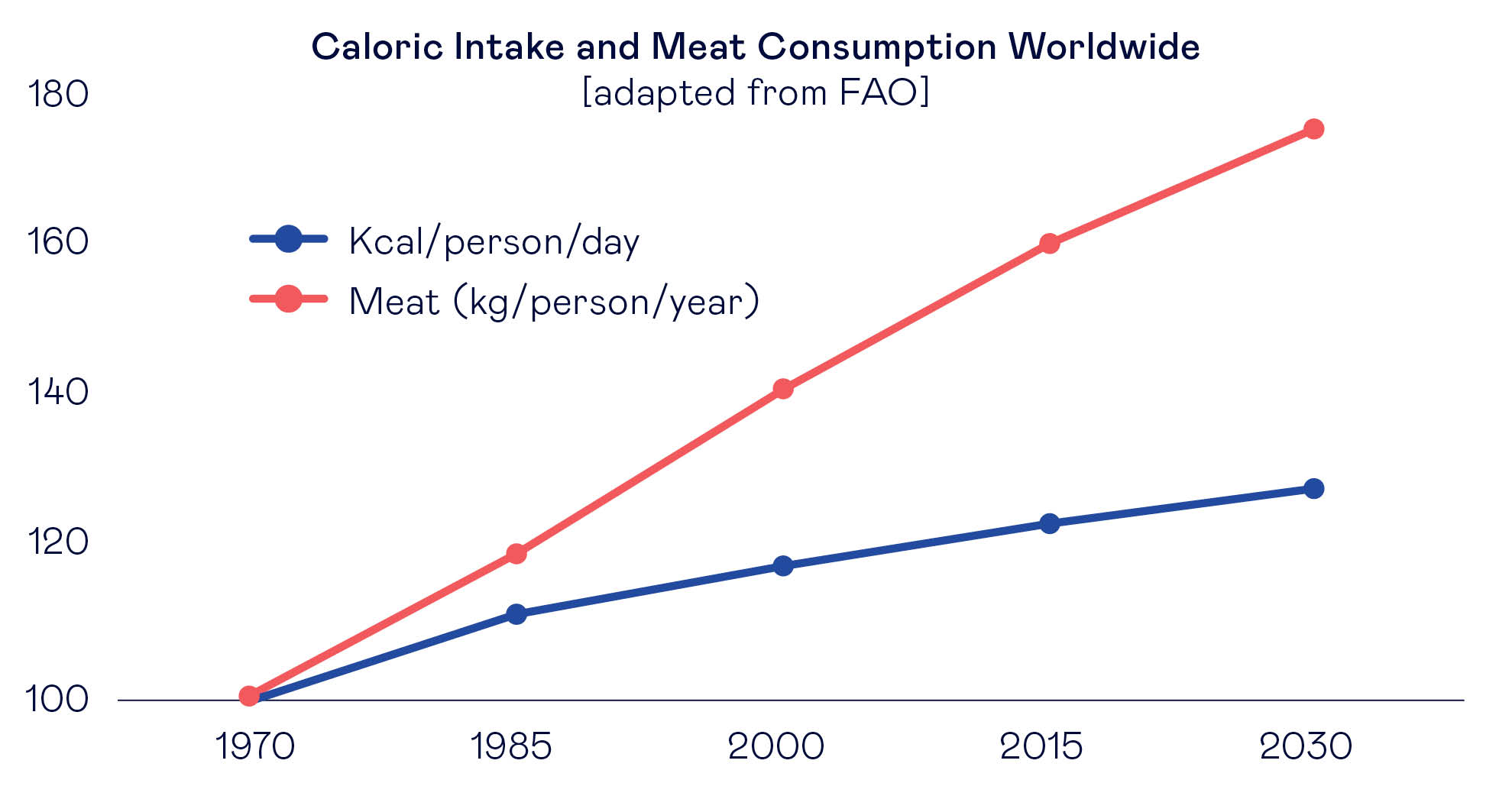 Behind meat consumption trends there are supply factors (notably, efficiency increases in poultry production) and demand factors related to income growth and urbanization—affecting, for instance massive increases in pork meat consumption in China. Although more expensive, or maybe because of that, beef consumption—the least efficient form of meat production (in terms of water use, land requirements for feed and carbon emissions)—has also continued to grow. 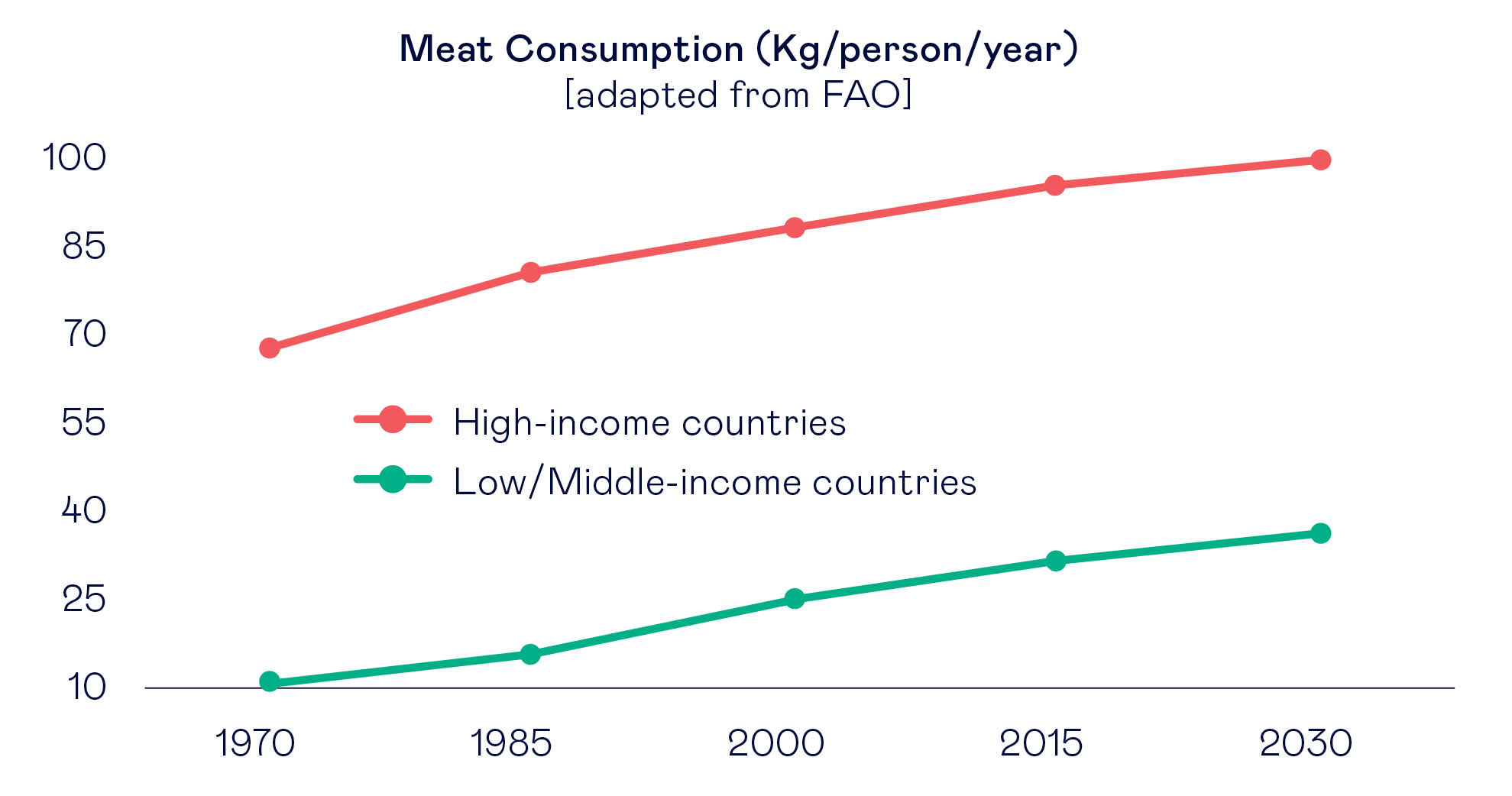 Urbanization, and its effect of reducing physical activity, affordability and convenience (reliance on prepared and packed foods with more fats and sugar and reduced consumption of fruits and vegetables) have also had a major impact on the qualitative changes in diet that are contributing to the spread of cardiovascular and other non-communicable diseases, as well as increasing awareness of the risks they pose.

Besides concerns with climate change and the role of livestock in carbon emissions and possible regulatory and consumer demand changes in that regard, there are two dynamics worth watching carefully as signals of change and maybe even of an inflexion point in dietary choices. One is the consumption of plant-based substitutes for meat and the other is the algorithm- and gadget-based personalization of nutrition guidance.

One strong indication of consumer interest in healthy and earth-friendly foods is the early-stage success of plant-based substitutes for meat that are not targeting vegetarians and vegans but the nutritional concerns of the population at large. This market has already reached multi-billion USD and Euro revenue levels in the US and the EU. While still a very small share of the meat market, plant-based products are increasingly claiming shelf space in supermarkets. Another significant steppingstone has been the inclusion of meat substitutes in the menu of large fast-food chains best known for their hamburger offerings.

Initially the impetus came from specialist producers like Beyond Meat and Impossible Foods, but many large-brand producers are now endorsing the durable potential of this dynamic by introducing into their product offerings plant-based alternatives to meat and even to fish and seafood. From being treated as novelty items, plant-based protein alternatives have evolved into products with a strong consumer sentiment behind them that has a good chance to keep growing—in absolute revenue and in and market share terms.

Personalized nutrition guidance can, on a parallel track, add a powerful impulse for diet change. Research has found that although biological responses to the same meal are highly variable between individuals, a person’s response to the same meals and to different meals with the same nutrient profile is often similar and therefore to a large extent predictable. A groundbreaking study from the Weizmann Institute—successfully replicated by researchers in Europe and the US—focused on spikes in blood glucose after meals as a marker for weight gain and metabolic disorders.

Building on that and related research it became clear that once individual responses to specific foods are analyzed, algorithms can predict their response to other foods and provide a promising means for designing effective interventions to control potentially damaging responses to food intake. This has important implications both for medical treatment and preventive nutritional behaviors, but in this note we focus just on the latter and its impact on dietary choices.

Algorithms are rapidly becoming available to assess the interaction between food intake, and an individual’s metabolism, lifestyle, behavior, and environment

Algorithms are rapidly becoming available to assess the interaction between food intake, and an individual’s metabolism, lifestyle, behavior, and environment. Combined with the growing availability of sensors in smart bracelets, watches, straps, and other wearable devices with nutrition-tracking capabilities, they have already paved the way for personalized nutrition guidance. Chronic, nutrition-related, non-communicable diseases are a growing concern worldwide and preventive and remedial strategies by individuals, families and communities based on these data and algorithms could result in significant health care improvements and set the stage for potentially rapid changes in dietary choices.

This is not science-fiction but relies on available technologies that could be deployed quite quickly and become part of a personalized nutrition-guidance ecosystem including more detailed machine-readable product label codes, smart appliances, etc. A recent “What If” section in The Economist provides a glimpse of how much this could have progressed by the mid-2030s. While initially this may appear to be something viable only in high-income countries, rapidly dropping costs of gadgets and government support could see a personalized nutrition-guidance ecosystem develop in many countries. China, for instance, has proven remarkably quick to adapt new technologies in various fields and could become fertile ground for this dynamic.

The convergence of concerns around climate change, nutrition-related diseases and animal welfare has the potential to accelerate an already emergent dynamic pointing to major changes in dietary choices. There are significant uncertainties around the speed of change in different parts of the world and on how this dynamic will interact with demographic and economic trends, but it is clear that it has the potential to shake up almost every market in the food supply chain and all the industries around it.