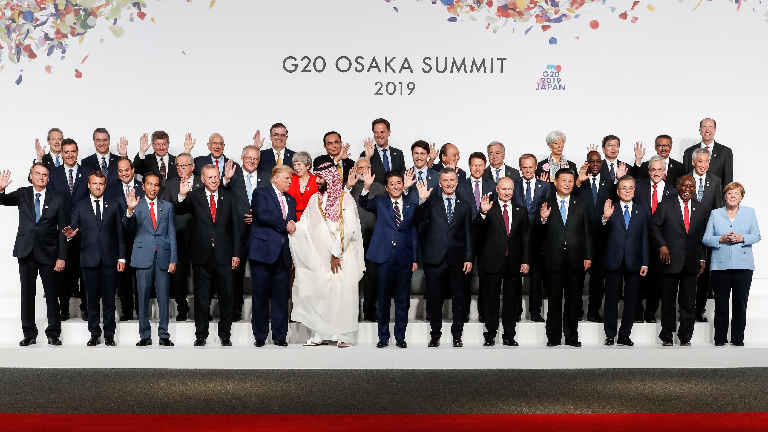 From G20 to global leadership: a gap to be filled

The current crisis has clearly exposed the gravity of the flaws in the existing platforms, while recent demographic and economic trends have significantly altered the composition of the world's economy – and population.

GDP shares of the G7

The share of the G7 in the world economy has dropped from 67% in the early 1990s to 46% currently (and in PPP terms the current share is just 32%). G7 obsolescence has recently been 'discovered' by Donald Trump (…although probably more than anything this was because his Mar a Lago convocation and his June 2020 Camp David invitation were snubbed or ignored by the other six members) who is now proposing ad hoc extensions of participants based on his current fancies and phobias – and ignorance of the recent history of G7 and G8.

The G20 currently consists of 19 countries plus the EU and its credibility has suffered from fundamental problems since inception – notably an 'invitational' membership driven mainly by economic size and the preferences of the US and Canada at the time of creation in 1999.

This lack of credible legitimacy has been made worse by the fact that its rotating presidency has been in the hands of Saudi Arabia in the crisis year of 2020. The G20 has also faced challenges ensuring continuity and follow-up whenever it has made decisions. 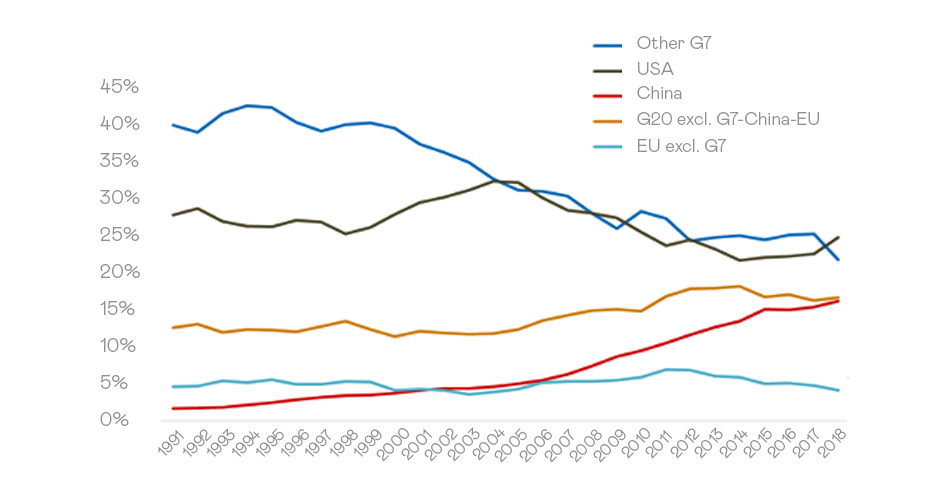 While the share of the global economy that the current G20 countries represent has remained fairly stable (declining slightly from a peak of 87% in 1995 to 82% today – and counting in that total the whole of the EU), the composition has shifted considerably. The share of the world economy represented by the US has declined moderately, the share of the other G7 countries has dropped precipitously, while China's share has increased dramatically…to the point that it now equals the share of the other 11 countries (all G20 minus the EU, US, G7, and China).

The aim should be to replace the G7 and G20 with a process and engagement platform that can facilitate dialogue in normal times, and provide leadership for the mobilisation of responses in times of crisis and challenges. We propose building the GLG process on the current debris of the G7 and G20 – replacing them.

The core of the proposal is the transformation of the 'by invitation' G20 into a similar-sized but transparently constituted group with a systematic membership consisting of the countries with the largest economies and the largest populations – plus a rotating participation of other countries. This structure will achieve a quasi-universal representation while preserving the effectiveness that larger groupings cannot have.

The other key component of the proposal addresses the need for continuity and staff support for the GLG. Filling this critical gap quickly can best be achieved by leveraging the existing institutional capabilities at the disposal of the international community.

There are three challenges to be addressed: heft; effectiveness; and legitimacy. Heft has traditionally been defined in economic terms – so membership would include the largest economies. This was not strictly the case of the G20 which includes the EU and 19 countries including Argentina, Saudi Arabia and South Africa – each representing well under 1% of the global economy – while leaving out countries like Spain (a regular 'guest' but not a member), Poland, The Netherlands, and others with greater economic weight.

But when considering global leadership, heft should also take population into account – especially in light of recent demographic trends and changes in the location and age composition of the world’s population. The current composition of the G20 leaves out countries like Nigeria and Pakistan (each with populations above 200 million).

Half of the world’s population lives in lower-middle and low-income countries (that together account for 62% of people aged under 15); and 16% of the population (but 32% of people aged 65 and above) live in high-income countries. This indicates that the disparities will continue to grow and underscore the importance of ensuring that population and the world's youth are not ignored in the core composition of the GLG. 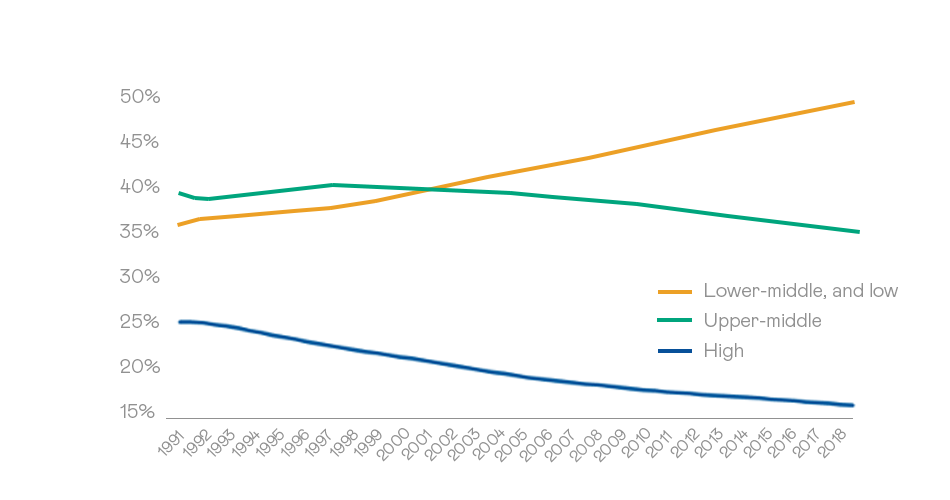 Effectiveness (and related agility) requires a manageable group and we propose that such a group should consist of no more than two dozen members. Up to 20 countries could be core members with a rotating presidency, as is currently the G20 practice.

How core membership is determined is crucial for the GLG's legitimacy and requires a transparent and data-based approach. Focusing on the world's largest economies and most populous countries would produce a systematic choice of such core GLG members.

The simplest option would be for GLG core members to be the countries with the largest combined share of the world's economy and population. The 19 countries with the highest combined shares of GNI and population would be natural candidates. The Annex lists them – and also indicates how variations on this approach would produce slightly different lists. The key, however, is to have clear criteria instead of 'invitational' judgements based on affinities.

This leaves the additional question of how to broaden the representativity of the GLG participants. Two possible avenues for achieving this are worth exploring – both focusing on regional representation. One would consist of five rotating participants (for instance, one for each UN region with a selection process along the lines used for the rotating members of the UN Security Council). The other would rely on regional organisations to provide that representation and geographical perspectives – their involvement could be as full non-chairing participants, or as permanent guests with influence over agenda discussions.

Continuity in a rotating presidency process is an important challenge. When the scope of potential discussions is as sweeping as in the GLG, continuity together with expertise will be crucial to its success. This has long been recognised and there have been a number of proposals to establish a secretariat – none of which has prospered. But this becomes both more pressing and more achievable in the context of a newly legitimised GLG.

Creating an organisation with the required depth of expertise from scratch is not viable. The question is how to leverage existing capabilities and/or transform an existing institution into the GLG secretariat.

When the scope of potential discussions is as sweeping as in the GLG, continuity together with expertise will be crucial to its success

The OECD would seem like a substantively ideal candidate – although it will procedurally require a very pragmatic approach that draws on the good will of existing members. There may be other 'host' options worth considering in existing institutions (including the UN-DESA and the World Bank) but an option involving OECD seems better in terms of existing knowledge capacity, lack of potential conflicts, and flexibility to support an evolving GLG agenda.

The OECD was created in the aftermath of World War II for a limited purpose. It has evolved into a club of mostly European countries with no coherent logic to its membership. Even though it has a prominent global presence (and hosts important institutions like the International Energy Agency), its 37 member countries account for just 17% of the world's population and include only a motley crew of 10 non-European countries (Australia, Canada, Chile, Colombia, Israel, Japan, Korea, Mexico, New Zealand, Turkey and USA) – leaving out African and East Asian countries entirely (except by engaging them in the peripheral OECD Development Center).

As the OECD has evolved it has accumulated a widely recognised analytical and policy advisory capability that makes it one of the world's most valuable think tanks. Meanwhile, its membership has lagged behind major global economic and demographic shifts and its formal processes and hundreds of committees have seen their sense of purpose and coherence diminished.

The OECD has already provided some support functions for the preparation of G20-related meetings – the extent depending each year on the country holding the presidency – but the mismatch between the composition and governance of the OECD and G20 raises questions of governance.

Building on its solid base of experts it should be possible for the OECD to re-focus and organise explicitly to play the role of a permanent expert secretariat. It will require imaginative organisational reform, as well as new financial burden-sharing, and might include side-lining the formal process and role of delegations. But, in exchange, it would offer major advantages – offering considerable value to the world without the need for significant additional resources to be mobilised, and enhancing the OECD's ability to pursue its professed goal of shaping policies that foster prosperity, equality, opportunity, and well-being for all.

These lists (based on 2019 data as updated in the World Bank’s WDI database in July 2020 – in the case of GNI relying on the Atlas method version) are just illustrative of a systematic approach and, hence, preliminary.

It is noteworthy that current G20 members Argentina, Saudi Arabia, and South Africa do not appear in either the combined-share approach or in any of the two alternative lists (that are also rule and data-based).

[1] The G20 meetings started in 1999 at the ministerial level, and the Head of State summits started in 2008 (maintaining the same country membership).

[2] The relationship was reviewed by J. Wouters and S. Van Kerckhoven in a 2011 George Washington International Law Review article and has since become closer.

[3] This is the type of approach proposed in Rethinking fundamental principles of global governance: How to represent states and populations in multilateral institutions (Governance Volume 22, Issue 3 July 2009 pp.341-351) and the list remains largely stable.