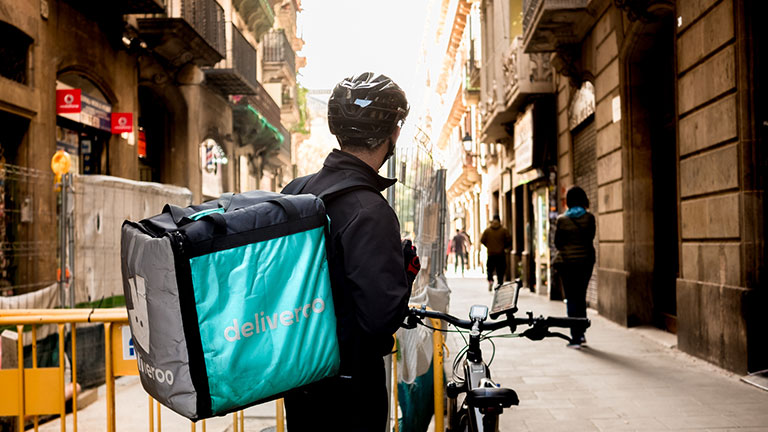 The “Gig and Share Economy” (GSE) comprises an extensive set of transactions through which individual contractors offer short-term personal or asset-sharing services. While various forms of gig-type employment and of asset sharing have long existed, what makes this a powerful and relatively new dynamic is the proliferation of digital online platforms that intermediate—and often structure—those services directly connecting supplier and user. The platforms provide an efficient and far-reaching alternative to door-to-door marketing, temp agencies, or craft fairs and other in-person assemblies and have made it possible for the GSE to grow rapidly.

On the supply side of the GSE there are independent contractors (generally individuals) with available time, skills, and assets. On the demand side there are individual consumers or companies willing to pay for a “gig” (a quick task or service) or access to an asset (most often housing). A stereotypical GSE transaction is the transportation service intermediated by platforms (such as those of Lyft and Uber) in which the supplier offers both time (and, it is assumed, driving skills) and access to their vehicle. The pandemic lookout periods saw an explosion of demand for restaurant delivery gigs with various platforms now competing for market share—and stock valuation—while increasingly raising questions on the boundaries between independent contractor and employee for the labor component of the service.

Besides the well-known convenience factor for consumers, this dynamic has significant implications for the labor market: it is expanding opportunities for individuals but also shifting employment towards freelancing arrangements. Initially the skills involved were fairly basic ones but, as gig transactions become more and more common and as the technology of the platforms behind them becomes more sophisticated, it is also becoming a contracting out option sought out even for large corporations and for high-level skills. Asset sharing transactions have already shaken up the hospitality industry—with Airbnb, for instance, already a real alternative to hotels virtually anywhere in the world—and their success, in turn, changing the supply side from the sharing of idle existing assets to acquisition of new assets (such as apartments) for the purpose.

The size of global GSE platform-based transactions is estimated to be over $200 billion and expected to be growing fast—and reach at least $450 by 2023. Transportation services represent the largest share (58%), followed by asset-sharing services (31%). Professional services account for about 4% and the provision of homemade goods and miscellaneous services account for the remaining 7%. The proportion of these revenues accruing to the gig/share providers varies by type but generally between three-quarters and two-thirds of the revenue accrues to the providers, while the rest goes to platform companies and third parties involved in the transactions. 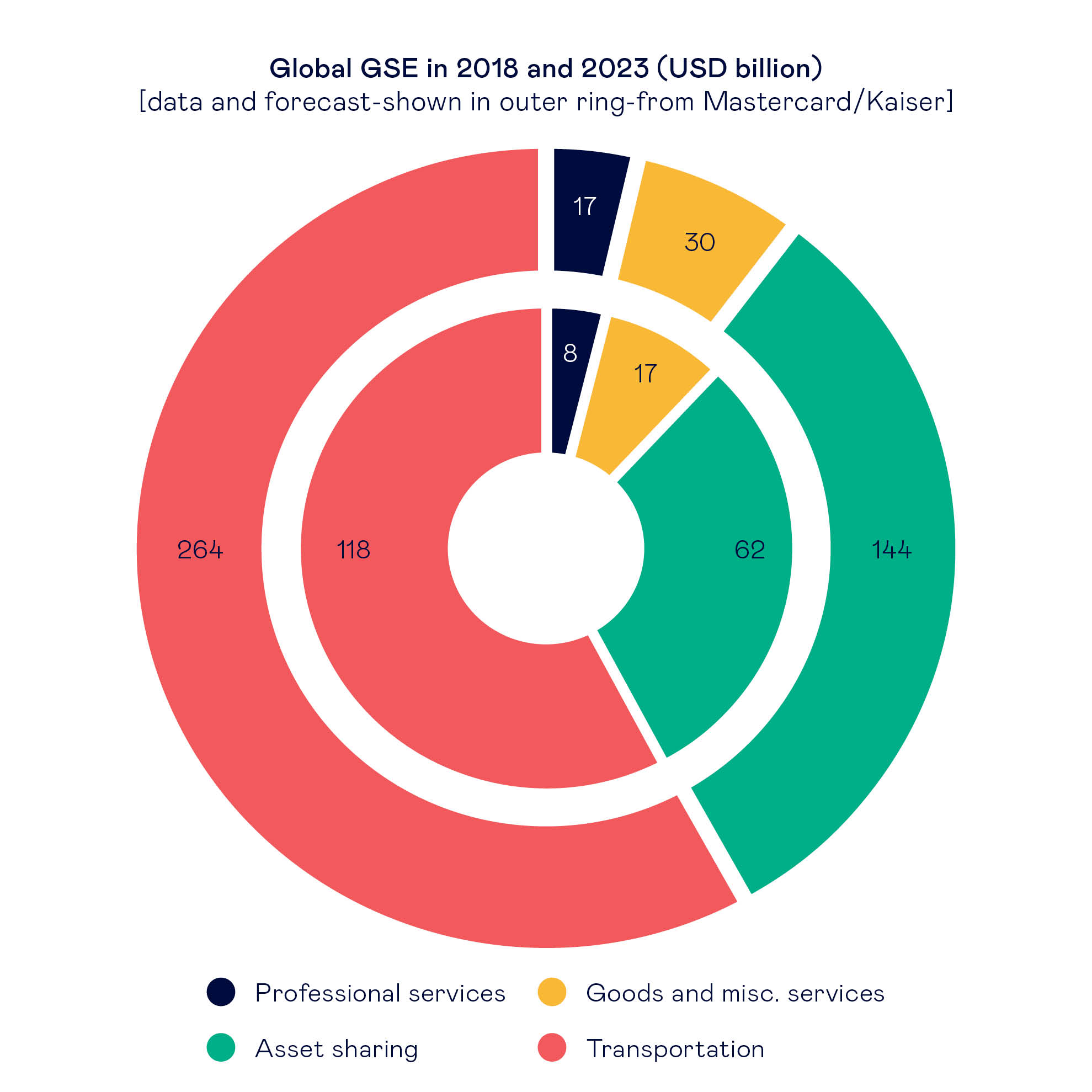 These shares were expected to remain stable, but the pandemic lockdowns seem to have several significant effects—some of which will be lasting:

Data on participation in the GSE are elusive (some gig work, after all, has roots in the informal economy) and surveys provide very different rates. A Gallup survey, for instance, found that 36% of US workers participated in gig in some form. Asking about income rather than about participation appears to provide the best handle on the question. The data from the survey shown in the chart indicates a 17% participation in the US and seems to be roughly validated in the US by data on “contingent and alternative employment” from the Bureau of Labor Statistics although definitional lines around the GSE remain quite blurry. 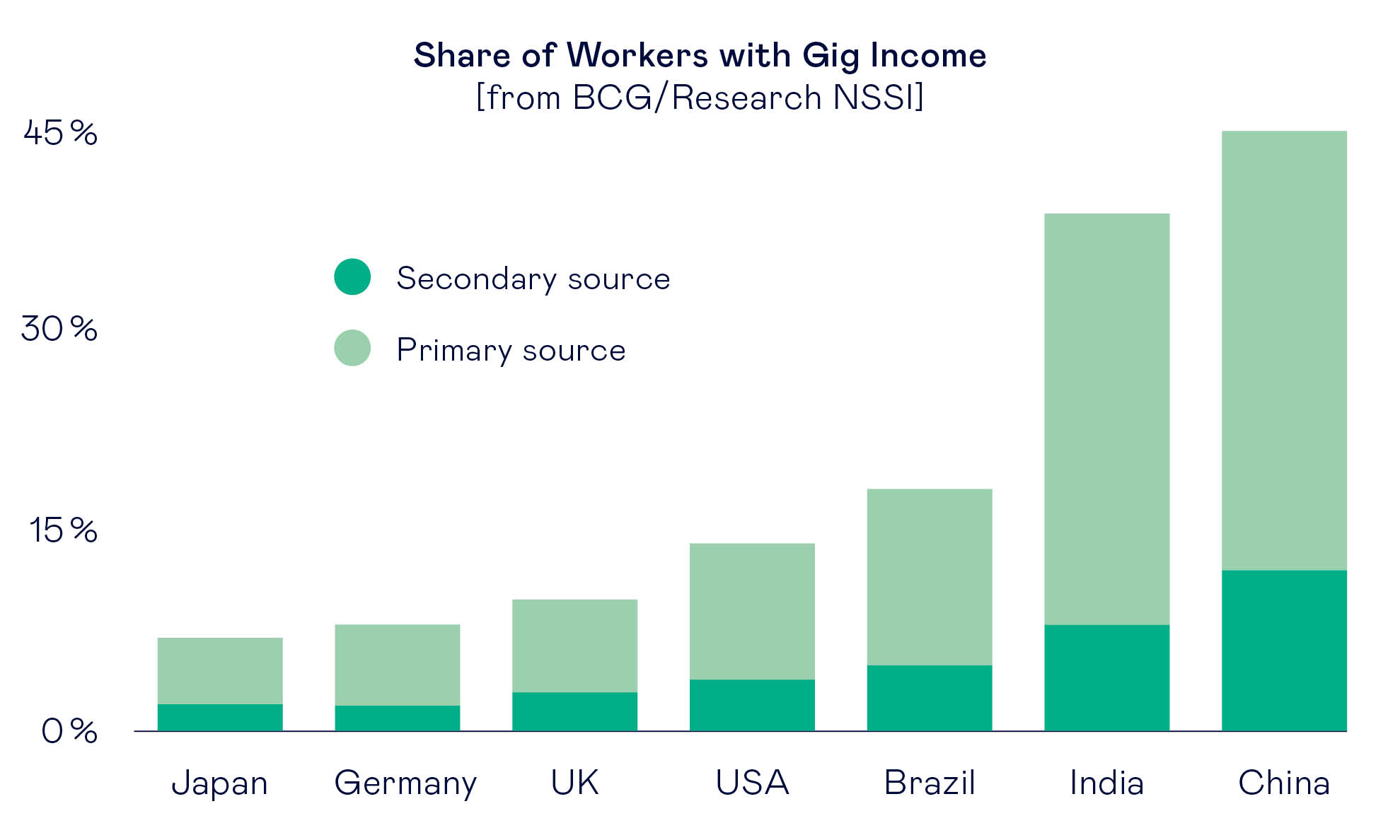 This survey found that gig work is a source of primary income for only a small minority of the work force—although the numbers are far from negligible. It also shows great differences between high- income and emerging economies, with the latter relying on gigs to a much larger extent both for primary and secondary income. The range among major surveyed countries goes from 7% in Japan to 45% in China with roughly one-quarter of workers overall indicating that gigs are a primary source of income.

A number of surveys have also explored whether gig workers consider it a temporary or transitory situation. The findings show overall that for a significant proportion (ranging from half to three-quarters, depending on the survey scope) gig work is their preferred option—suggesting that the supply is likely to continue growing. Adding to that expectation is the fact that participation in gig work is much more prevalent among young people: several surveys have found that gig participation rates among people aged 18-29 is double the average for their country.

On the demand side individual consumers also show signs of being willing to rely on gig work for a range of services. Even more interesting, because of how it is expanding the range of skills demanded for gig work, is the dynamic among corporations. For instance, a 2018 survey by BCG/Harvard’s Managing the Future of Work Initiative of executives in the US, UK, Germany, France, Japan, India, China, and Brazil, found that 40% expected freelance workers to account for an increased share of their organization’s workforce and that 50% saw corporate adoption of gig platforms as a significant trend. Other surveys have found that companies expect to rely more on non-traditional, external labor for a wide range of tasks. Platforms like PeoplePerHour that target corporate users have seen major increases in freelancer registrations.

As the GSE matures it looks likely that the “Sharing” part (which had seemed a compelling, quasi-communal, concept—references to which, according to Google trends, peaked in 2017) will fade and the Gig Economy part will keep evolving to encompass gig transactions that require some asset deployment (small-scale in food deliveries, medium in personal rides and large in housing rentals). The forces and uncertainties that will shape the GE will have implications for freelancing individuals, platform companies and corporate outsourcing of tasks.

A prime question, as with traditional employment, is how automation and greater digitalization will affect the demand for gigs. Will it turn out to be a threat doing away with the need for them (and making much of the GE a short-lived phenomenon), or will it further empower remote, independent contractors? Self-driving vehicles, for instance, would seem to be in the threat category but their realistic time horizon keeps moving further and further away. Increasingly sophisticated and specialized high-tech platform intermediators could also expand the range of tasks that corporations are willing to contract externally for.

The skill content of the gigs could change significantly. While demand for low-skill activities (such as delivery) will probably continue to grow, corporate use of gigs could generate demand at higher skill levels—and this could be matched by the availability for gigs of retired professionals living and willing to be active longer.

Regulations are an important uncertainty surrounding especially transportation/delivery gigs. Labor regulators in many countries (and localities) are struggling to fill the gap left by the traditional focus. Movements to unionize, or pursue other forms of collective action, combined with regulatory reform could change the contractual framework around many gigs. Finding a balance between the interests of the different GSE stakeholders will not be easy as many regulation battles (such as in California, China and the UK) already show.

The GSE has already changed many sectors of economic activity and is likely to continue to do so—albeit with many twists and turns. For individual workers it offers opportunity; for consumers it generates service alternatives that benefit them directly—as well as indirectly through the pressure on traditional service providers; and for other corporations the combination of potential gig labor supply and technology expands the range of options and combinations involving external work.