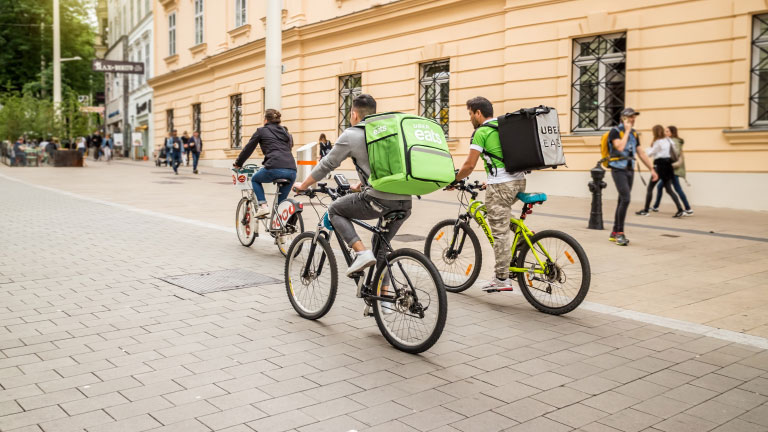 10 challenges of the gig economy

In the context of the sharing economy, many digital platforms, through crowdsourcing and on-demand hiring, have revolutionised how services are provided.

This article is based on research by Anna Ginès Fabrellas

In her research, Esade Assistant Professor Anna Ginès looks at 10 challenges that platform work poses for the Spanish legal-labour system and analyses the impact of these business models on labour relations.

The sharing economy offers scope for globalising human relationships that previously could only be generated within small communities of people (families, friends, neighbours, acquaintances...), making it possible for users to exchange, lend or share goods or services.

Platforms such as Uber, Deliveroo and Amazon Mechanical Turk, despite considering themselves part of the sharing economy, escape from its logic by developing true business models based on saving labour costs.

Through the intensive use of new technologies, these digital platforms have been able to develop a business model that completely outsources the services they provide.

This is possible by reducing the service to the level of micro-tasks and crowdsourcing it to a sufficiently high number of external workers using an on-demand hiring system.

3. Determine if the digital platforms are technological companies or service providers

Digital platforms operating within the framework of the gig economy claim to be mere technology companies, but the European Union Court of Justice recently stated that one of its paradigmatic companies – Uber – must be considered a service company.

The boundary between the two concepts is a fuzzy one, hence the need to study each case.

4. Update the legal classification of the relationship between service providers and digital platforms

New forms of work emerging within the framework of the gig economy do not fit well with the traditional characterisation of employee.

While working for digital platforms seems to fit better with self-employment, there is substantial evidence of dependence on and subordination to the company through indirect forms of business management with regard to working time, assignment of tasks and control of work performance.

In digital platforms, workers assume the costs of the service

In digital platforms, workers assume the costs of the service, use their own infrastructure and means of production and receive an economic benefit directly related to the quantity of services provided.

But these workers lack an autonomous business organisation to determine the terms and conditions of the service they offer and to set the corresponding prices.

Digital platforms use, de facto, the 'zero hours’ contract, as service providers are not subject to a minimum period of working time.

This contract, however, is not lawful in the Spanish legal-labour system and the excessive flexibility that comes with it brings an increase in job insecurity.

Treating workers in digital platforms as employees will not solve their problems as the geographical dispersion in performance of work, the discontinuity in the provision of services and the high turnover of workers makes it difficult for them to exercise collective rights.

Virtual forms of participation are needed, along with electronic voting systems in union elections and forms of virtual action (for instance, the disconnection of the platform), to guarantee the collective rights of such workers.

9. Disassembling the need for a third category

Given the supposedly unclassifiable work in digital platforms under current law, one strand of Spanish labour doctrine suggests the creation of a new category for workers in platforms.

However, drawing up an ad hoc regulation would only protect the business interests of a sector that is ruthlessly exploiting the competitive advantage conferred by the fraudulent use of self-employment to save labour costs.

10. Expanding the boundaries of labour law

Labour law must widen its bounds (both legal and financial) to include all forms of dependent work. The concept of employee must take into account the new digital environment to replace legal dependence with financial dependence.