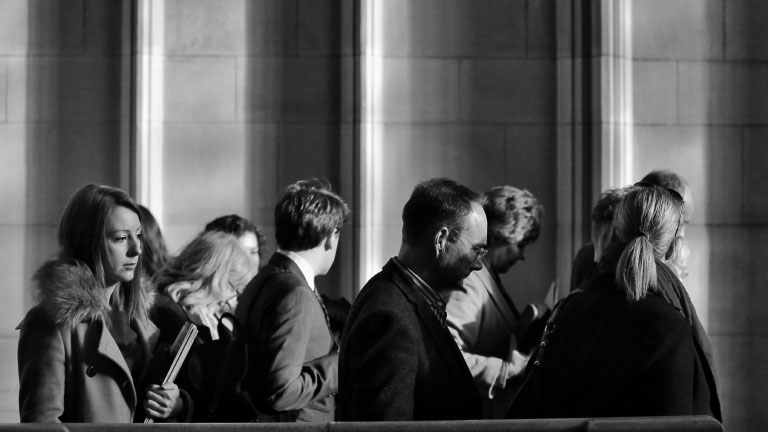 There are quite a few misconceptions about the role and contribution of leaders in change processes. Clearing up these misconceptions can help you develop your own leadership style and take the initiative in changing organisations.

The first misconception is that leaders are heroes who save a company. Leadership is often associated with decisive, dynamic individuals who save companies, achieve victories, and thus change the course of history.

Many myths, legends and other stories depict the leader as hero. However, leaders are not always the heroes who save an organisation. Of course, there are top managers or leaders who help a company get back on its feet but they never do this alone. It is about organising a dynamic process and teamwork to facilitate innovation.

Leaders are not always the heroes who save an organisation

Initiators are needed for that yet the initiative for change can be found everywhere: in managers, professionals, employees or even in involved customers. Leading change is all about people who are genuinely looking for new ways, who stick their necks out and take the initiative.

The second misconception is that the agents of change are those who hold senior positions. This belief is particularly common among companies whose leaders have strong personalities. It stems from a traditional way of thinking about organisations that stresses hierarchy and rules. Great importance is given to individuals' formal roles and status.

This is simply wrong because top executives and leaders are not necessarily one and the same thing. If they were, it would imply that other people cannot show leadership.

But the fact is that informal leaders with extensive networks both inside and outside the organisation are often involved in innovation initiatives. These informal leaders spread innovative practices. This does not mean that senior managers are unimportant in innovation processes for they often play a role in shaping the identity of a company and they can create scope for innovation. However, true innovation usually begins with informal network leaders who start experimenting.

The third misconception is that one can only really start leading if one has the formal power to make decisions. Many managers who have reached the top of the ladder soon discover that their role is not what they imagined it would be. They are overwhelmed by the number of external contacts and the demands placed on them.

It turns out to be impossible to oversee all aspects of a company and to be involved in all its decisions. Moreover, the information reaching top executives is often unreliable. All information that makes it to the top has been filtered – sometimes with the best of intentions, at other times for ulterior motives.

The more power one has, the harder it is to use it

A manager at the top of a company undoubtedly wields the most formal power within the organisation yet the more power one has, the harder it is to use it. Giving orders can lead to resistance, and keeping underlings on a tight leash can be demoralising. Such actions are usually a sign that top executives are failing to clearly communicate their strategic vision and delegate tasks.

The fourth misconception is that there are leaders and there are followers. In the traditional view, leadership is about influencing followers' behaviour in pursuit of the organisation's goals. There are many theories about leaders' traits, the behaviours they exhibit and what makes them effective.

Followers are more effective if they act independently of leaders

In recent years, followers' behaviour has also been studied. A fascinating insight is that followers are more effective if they act independently of leaders and choose an active role themselves. Followers can take on a leading role and they can undermine the leading role of others.

Leadership is a matter of interaction between leaders and followers, in which leaders often do best when they pass on leadership to others. This allows others to take the initiative in achieving results and making changes.

However, leadership and management are not separate spheres because both have a common aim, namely to keep a company financially sound and future-oriented. Managing an enterprise not only requires inspiring leadership but also high-quality management skills.

The sixth misconception is that change is only possible under pressure. Many management books erroneously say that one needs to create a sense of urgency before people are willing to change. Of course, if a company is in crisis, it is important to tell staff how bad things are.

The sixth misconception is that change is only possible under pressure

Leaders will always use a crisis to make changes but a more interesting question is why the crisis was not foreseen. Perhaps signs that something was amiss were ignored or internal controls did not work as they were supposed to. That would then actually be more of an indication of failed leadership.

A crisis may be a reason for change but it is not a necessary condition. However, change does require clear aims coupled with a vision for the future. Here, change is not about organising a crisis but about organising aspirations.

The seventh misconception is that leadership is leading others. In fact, one mainly leads oneself. The trick is to keep one's ego in check and not allow oneself to be turned into a hero. Leaders lead themselves by reflecting on the course of their own lives. Which people, events and places have made you who you are today? What beliefs stem from this?

Effective leaders foster honest feedback on how they are seen and how they are doing. They ask others around them what was done well, what was helpful to others, what they should not have done and what they should do better in the future. In other words, successful leaders are constantly looking for ways to know themselves better and to improve their performance.

The distinction between leaders and followers also turns out to be fictitious. People in operational positions can take the lead in innovation processes and formal leaders can follow these up. Leaders and managers are not different types of people for they strive towards common corporate goals.

Urgency is not a prerequisite for change but an inspiring vision of the future is, as is an unwavering commitment to self-improvement.