Population aging is one of the future trends most often highlighted and the over-65 age group is typically used to illustrate the growing magnitude of this dynamic. This threshold seems obsolete, however, and another side of the dynamic—longevity—deserves a lot more attention and requires adopting a new lens to explore it. People are living and staying active longer and longer and this has sweeping implications for social and political dynamics—and for markets and businesses of all kinds.

The share of the population aged 65 and over is the common descriptor of aging population. Currently people over 65 represent just over 9 percent of the global population—compared to just under 6 and 7 percent 40 and 20 years ago, respectively. Of course, these are averages that mask major differences across the world—as is clearly illustrated by two extreme cases among large population countries: Japan’s share of people older than 65 and older is 28 percent and Nigeria’s only 3 percent. China is a major contributor to population aging—having almost doubled (to 12 percent) the share of people over 65 in 20 years and many countries in Africa are still barely increasing their 65+ share, the speed differs but the direction is similar across the world—driven by a combination of declining birth rates and increasing longevity.

Longevity can be analyzed quantitatively by looking at the evolution of life expectancy at age 65. While, again, there are significant differences across countries (largely related to per capita income levels), increasing longevity is a generalized and historically unprecedented phenomenon. In middle income countries (inhabited by almost three-quarters of today’s world population) people aged 65 can expect to live 16 more years—compared to a 10-year life expectancy six decades ago and 14 two decades ago. The COVID-19 pandemic will be reported as having reduced life expectancy—especially for older people; this (hopefully) one-time shock, however, is only meaningful in a statistical sense and it is unlikely that it will have affected fundamental dynamics around longevity. 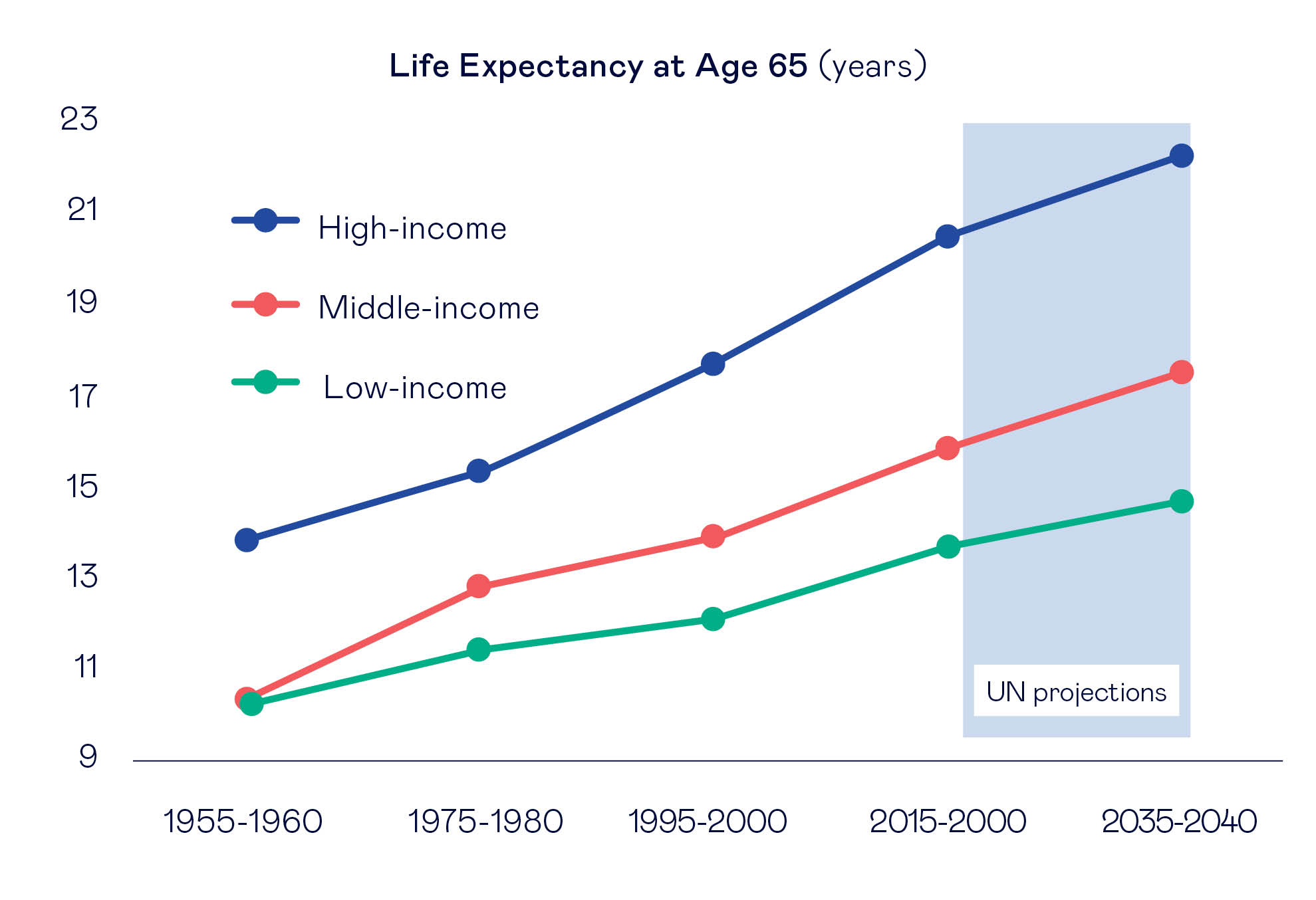 The intermediate UN population forecasts show the increase continuing globally at a pace of about an additional year of longevity per decade. There is considerable uncertainty, however, around this base case projection. On one hand, given the major increases in longevity in recent decades we might be facing a plateau—or more pandemics. On the other hand, the large life expectancy gap still remaining between high-income and other countries and the potential for further medical care improvements might mean that there could be plenty of upside room in this forecast for life expectancy at 65 globally to increase even faster. For many industries and organizations it will be important to keep an eye not just on the actual evolution of longevity but also on the rules, practices and perceptions around it.

Much of the discussion around increasing shares of the population aged 65 and over centers on pension-related fiscal implications (dependency) and on the financial system impact of gradual savings depletion. But these are not driven by longevity as much as they are about current norms and conventions about the key role of 65 as a threshold for the outset of retirement from earning activity, so it is worth exploring what alternative thresholds for mandatory and voluntary retirement could imply.

Potential support ratios are a useful indicator in that regard, as they measure the working age population compared to the population above a retirement threshold. The conventional measure treats 15 as the working age threshold and 65 as the retirement threshold. Given their population structure, low-income countries have very high potential support ratios (currently above 16 and projected to decline very gradually), though of course they face the challenge to generate economic opportunities for large pools of young people.

For high-income countries the potential support ratio is already at a low 3.5 level and UN projections show it dropping to 2.4 by 2040—hence raising grave concerns about the fiscal burden of pensions. Shifting the thresholds to increasingly more realistic levels of 20 and 70 would result in a projected 3.2 ration for 2040—still of concern, of course, especially in countries where the potential working age population includes significant unemployed or out of the labor force.

The greatest shifts are expected to happen in middle-income countries—where the bulk of the world’s population lives. The current ratio with conventional thresholds is at 8.2 but projected to drop rapidly—to a concerning 4.7 in 2040. But shifting the upper threshold to 70 (reflecting expected longevity increases) would set the ratio at 7.5 for 2040. The examples of Brazil and China illustrate both the trend and the impact of raising the upper threshold from 65 to 70.

Understanding the dynamics and signals of change around working age thresholds (including inter-generational conflicts of interest) and the nature of the uncertainty about the effects of longevity in different domains will help identify business opportunities and manage risks. In tracking these dynamics, it is worth noting that rule changes will, in turn, be influenced by increases in the older share of the voting population, as in many countries turnout by people aged over 65 is much higher that for the rest of the voting citizens—so their political influence is compounded. See, for instance, the turnout rates from the 2020 US presidential election shown in the table.

The implications of expanding longevity are wide-ranging; the following are some thought-starter examples from different domains of economic activity:

Shifting the viewpoint from mainly focusing on the burdens of aging population (and around the 65 threshold) to also probing a more open-ended longevity dynamic helps prepare for changes in norms and practices that seemed well established but may turn out to be made obsolete by demographic and social change. From this broader perspective, the “silver economy” could uncover a world of opportunity with wide-ranging business potential and to everyone’s benefit.