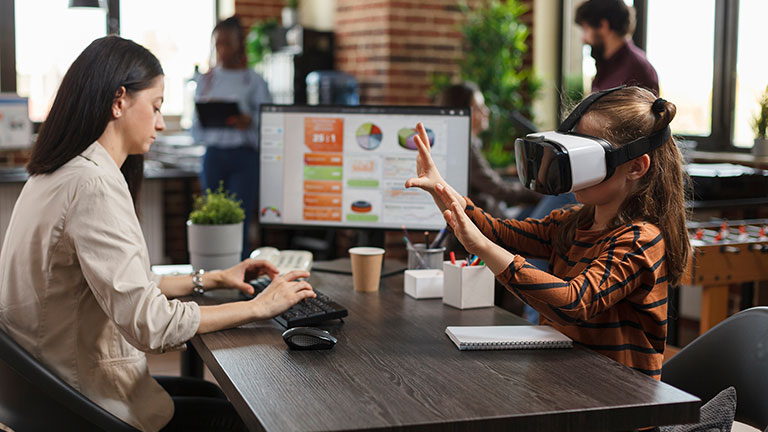 Metaverse is generally used as a noun, but it is tempting to treat it as an inviting verb surrounded with question marks to underscore the circumspection it merits. Organizations of all kinds—especially consumer-facing businesses—are wondering when and how to engage. Or whether to treat the metaverse as mainly a distraction—possibly even an emperor without clothes—with only specific elements under this broad notion being actually relevant for different aspects of business operations.

There is no single definition, concept or technology behind the term metaverse—which can be taken to mean literally/pompously "beyond the universe” or, more tentatively, a broader sense of space. It refers to a combination of elements that converge into a new embrace of technology. The spotlight on the term (well documented in the spike of Google searches for metaverse in late 2021) was magnified by the move that the company formerly known as Facebook made to rename itself as Meta Platforms and pivot its strategy around the metaverse.

Proponents describe it as the next iteration of the internet—designed to bring the digital and physical worlds together—or as the immersive virtual reality version of the internet. A less metaverse-centric view, however, would place it as one of the moving parts encompassed by the broad concept of Web3—alongside blockchains, cryptocurrencies, non-fungible tokens and the opening of more avenues for “creator economy” activities that blur the roles of service production and consumption.

In practice the metaverse seems to amount to a collective, interactive virtual reality with people choosing to appear as “avatars” who move through space engaging in activities that range from the mundane (shopping, flirting) to the fanciful (sword fights, espionage). We will have to see how it unfolds to size up and it is early days but, even with that caveat, what has been so far showcased is quite clumsy and far from fulfilling the promised experiences—as is clear, for instance, from the cartoonish scene of the December 2021 metaverse interview of senior Meta Platforms executive Nick Clegg shown in the Financial Times.

The metaverse convergence of digital representations and virtual technologies means that people can interact with digital objects and representations of themselves and others, moving freely across environments involving different combinations of the physical and the virtual. It can blend virtual and physical realities, both by representing people and objects from the physical world in the virtual and conversely by bringing the virtual into people’s perceptions of physical spaces. Most intriguingly, the metaverse could interact with the real world in various, unpredictable ways. It remains to be seen, however, if the metaverse represents a significant step-up from existing, purpose-specific applications and whether there is consumer appetite for the convergence it proposes.

The question is whether the convergence proposed by the metaverse really adds value to what is available through the individual elements, whether there will be enough consumer appetite for such an all-encompassing virtual environment, and whether any possible increment in value it might offer over the sum of the parts of its element compensates for the potential “capture” implied by relying on the kind of environment envisaged by Meta Platforms. For instance, in a December 2021 survey almost 90% of US internet users responding indicated concern over their privacy if Facebook succeeded in creating their metaverse.

For now, businesses in the digital space are playing it safe and indicating metaverse-readiness (at least willingness) and, for instance, in the weeks following the Meta Platforms announcement large numbers of mobile apps updated their name or the description of the offer to include the keyword ‘metaverse’. Microsoft’s hefty purchase of a major video game publisher is probably amply justified by the synergies with its other business lines and the potential of ubiquitous gaming, but it was, interestingly, also described with reference to the metaverse (... for which it will “provide building blocks”).

At the core of the metaverse experience is presence: the feeling of inhabiting a virtual space, with virtual companions

More conventional corporations are also dipping their toes into the metaverse using easily accessible gateways and pilot projects. For instance: JP Morgan has set up a metaverse ‘office lounge’ in a digital shopping space created by Everyrealm which is one of many initiatives to monetize the value of virtual objects—derived from the meaning attached to them even if untethered from traditional sources of value; and Telefonica had a ‘metaverse stand’ at the recent Mobile World Congress. More generally, a survey of large businesses worldwide suggests that most are just watching the trend and only about one third have plans to have metaverse-specific products and services within the next 5 years.

At the core of the metaverse experience is presence: the feeling of inhabiting a virtual space, with virtual companions. By putting on virtual reality headsets or augmented reality glasses, people can socialize, work, play and worship in environments where the boundaries between environments and between the digital and physical are permeable. In the metaverse, these experiences are supposed to be seamless on- and off-line.

This sense of presence—which research has shown that it improves the quality of online interactions—is achieved through virtual reality (VR) technologies primarily, for now, using head-mounted displays. Data on the number of VR headsets actively in use hence provides an indication of the pace of adoption of this technology. What the data shows is an initial burst of enthusiasm and early adoption through 2017 … and then considerable disappointment (projections made in 2016 envisaged almost 100 million VR headsets being used by now—four times the actual number … even if the 2021 estimate proves accurate). 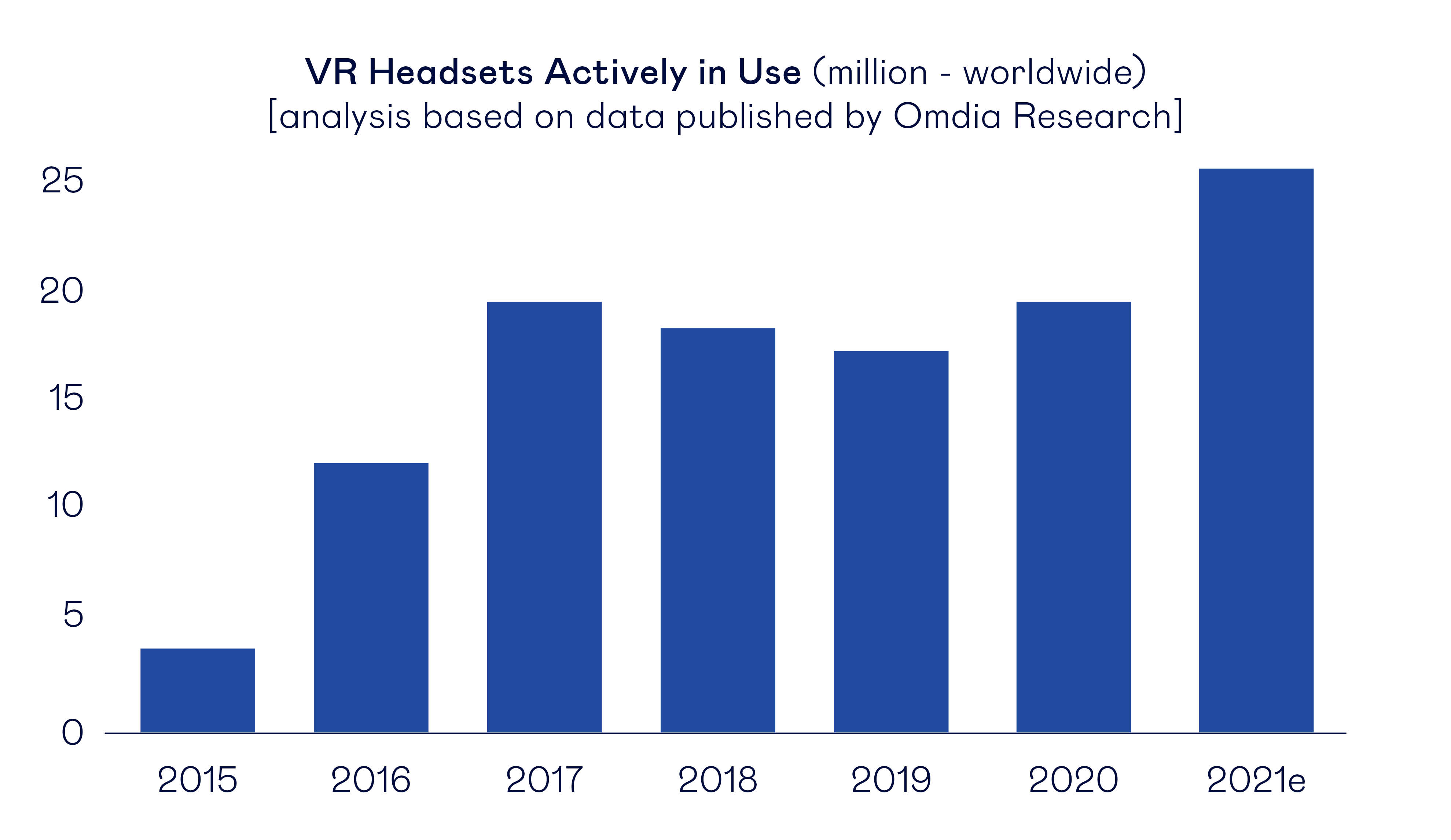 Although gaming and other forms of household and individual entertainment provide the largest component of demand for VR applications, the technology has already been used in many business applications, as have variations on that technology such as Extended reality and Augmented reality (as in Google Glass—which failed as a mass consumer product and is now focused on narrow enterprise uses). Limited applications of VR/AR/ER are already familiar in marketing—for instance, clothing, real estate/furniture and in connection with physical exercise equipment—and have been experienced by many shoppers, either online on in-store display screens.

The area in which VR and related technologies are seeing more satisfactory adoption is probably training—ranging from classroom alternatives in academic settings to diagnostic and maintenance instruction. As noted in a recent DoBetter post VR/AR offers many possibilities, and already some promising trials, in education—ranging from immersive anatomy lessons, to engineering simulations and social experiments. Research has shown that engagement retention is much higher in virtual environments and learning is faster and more customizable, so courses can be both shorter and more effective. But, again, does the metaverse add much (if anything) to sophisticated, purpose-specific VR/AR applications?

The size of the metaverse-related market is hard to assess because of its elusive boundaries. But attempts to do have focused on four main segments: hardware (notably VR headsets) is the largest ones, accounting for almost two-fifths of the revenues; social media advertising and live entertainment each account for over one-fifth; and software accounts for the remaining 15% of revenues. These rough estimates represent a snapshot of the current stage and, while in absolute terms the whole market is expected to grow rapidly, hardware is expected to account for a smaller as the market matures … if/when it does. 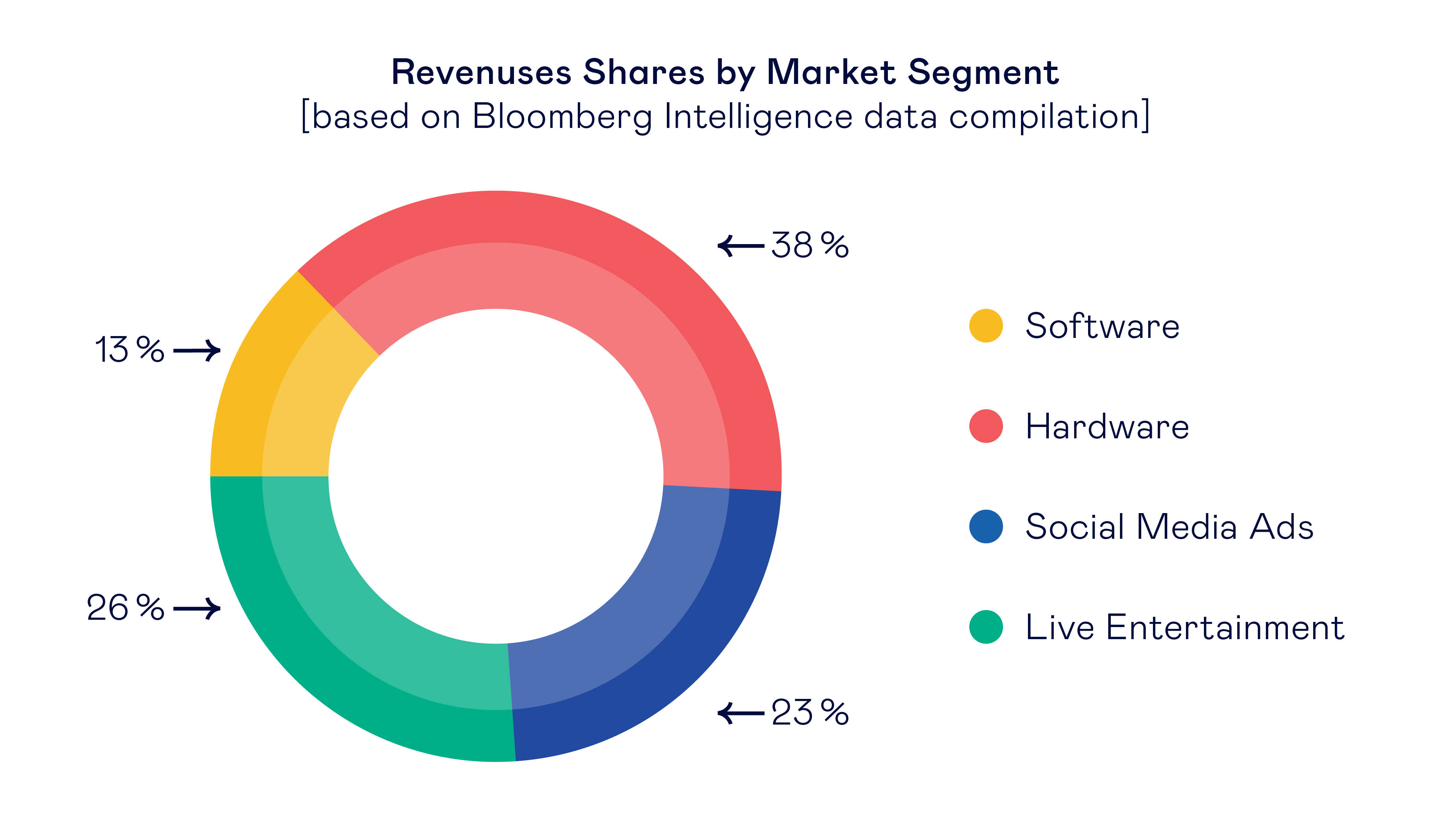 Key to making the metaverse more enticing will be interoperability, so no platform becomes a proprietary cage. This will require common technological standards and work underway in that direction is still in its infancy and—given the fuzzy nature if the metaverse—plagued with challenges. Progress on the standards underpinning interoperability will provide a good indicator of the potential for the adoption of the metaverse to spread.

Alongside interoperability-enabling standards there will be demands for metaverse player protection. If social media has already created opportunities for crusades, bubbles and distortions, the more immersive metaverse experience will unlock new vulnerabilities and open the door for new malicious and disruptive opportunities. Those demands will not be satisfied by any one company’s assurance that it has developed technology and protocols to detect and prevent abuse in the metaverse and could result in interventions affecting the shape and potential of the metaverse—nationally and globally.

Whether and when the metaverse gets much traction and how it shapes up (and whether the term proves perishable or lasting), it is something worth watching and it will probably be easy and inexpensive enough to plant “scouts” in parts of the metaverse relevant to a company’s target market. But the implications for business more generally will come mainly from developments concerning key metaverse elements, notably Virtual, Augment and Extended Reality applications, and how they are affected (possibly compounded) by other aspects of the evolving Web3 system—or whatever the next incarnation of the Internet turns out to be.