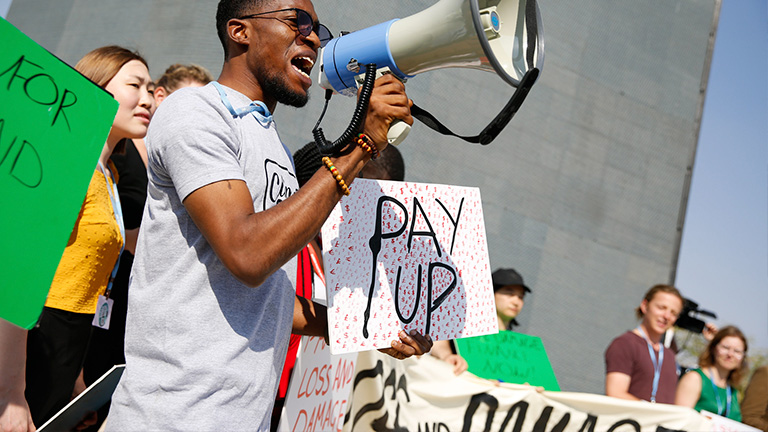 "The moral question at COP is whether rich countries have to...

November 2022
Update Required To play the media you will need to either update your browser to a recent version or update your Flash plugin.

The 2022 United Nations Climate Change Conference, COP 27, is about to finish. In this episode of Do Better Podcast we discussed with Àngel Castiñeira, director of the Esade Center for LeadershipS and Sustainability, what should we expect of this year’s highest-level forum to tackle the climate emergency.

Àngel is also a professor in the Department of Society, Politics and Sustainability at Esade. He holds an undergraduate degree and PhD in Philosophy and Education Sciences from the University of Barcelona and is specialized in the areas of social and political philosophy, geopolitical thought, applied ethics and values, changes in the social and cultural environment, and democratic governance.

You can listen to the full podcast in Spanish here.

The Glasgow Declaration, presented at the last COP, made many grand promises but was short on details. In particular, it did not specify any framework for how countries are to meet their targets. What should we expect from the Sharm el-Sheikh Declaration, from Egypt, and how might the rather adverse geopolitical and socioeconomic context with which we are going into the conference affect us?

The current geopolitical and socioeconomic context has been, and continues to be, adverse. The health crisis, which we have not yet put behind us, was followed by a war and geopolitical crisis with major repercussions in many other areas. The summit is being held in the shadow of the long war in Ukraine, which began on February 24 this year, triggering a supply crisis and energy costs that wasn’t expected by Europe. There is also the threat to food security in many African countries.

The current high inflation, the rising costs of living, and the threat of recession have diverted some of the efforts and visibility of climate policy and made the energy transition more expensive, despite the recognition of vulnerability and the occurrence of abnormal climate events in the form of high temperatures, droughts, fires, or floods.

For instance, to date, only 24 countries have reviewed and modestly updated their targets and pledged contributions. So, unfortunately, as is often the case, temporary regional emergencies, such as the war in Ukraine, are taking precedence over structural priorities that affect the whole world, such as climate change and the environmental emergency affecting biodiversity.

One of the focuses of this summit is the losses that climate change will cause. This is tied to the establishment of a compensation fund to address the devastation caused by climate change in countries that are already being affected. The goal is to secure an annual budget of $100 billion for mitigation and adaptation measures. Why is it so important to talk about this fund right now? Also, what should these budget funds prioritize?

It has been over a decade since the 2009 Climate Summit in Copenhagen, where rich countries pledged to mobilize $100 billion a year in climate finance for developing countries by 2020. We are now nearing the end of 2022, two years after that deadline, and we are still a long way from reaching that goal.

The big moral question of the COP27 summit is whether and how rich countries should compensate poorer ones for the losses and damage caused by their carbon emissions.

However, the West will not agree to discuss responsibilities and retroactive compensation at all; it has repeatedly refused at the various summits to include such language in any public document. It is willing to discuss financial aid, but that’s it. And, for now, that aid falls short of expectations and the pledges made.

The costs of the war in Ukraine have already far outstripped the amount of financing that African countries, among others, would need, and without such financial aid, African nations will not tolerate decisions that jeopardize their economic, social, etc., development.

This reflects the concern that the global drive to phase out fossil fuels could slow Africa’s energy expansion. Simply put, without financing for these countries, there will be no mitigation. And that will be a problem, not just for Africa, but the whole world.

On the other hand, the establishment of a compensation fund to address the devastation caused by climate change in countries already heavily affected, such as Pakistan, and for which adaptation actions are insufficient, is another essential point of climate financing, advocated by vulnerable countries and in forums such as the G77. It has also garnered the support of China.

The question was left unanswered at the last summit, but the Glasgow dialogue provided for a two-year window for negotiation on which progress could be made at the current summit. As we know, the affected countries take years to recover from these phenomena, which also cause deep and lasting social damage. I would say that this is the big core issue at the summit in Egypt.

Multilateralism has been going through a rough patch for several years now. Last year, world leaders such as Xi Jinping, Putin, López Obrador, Bolsonaro, and Erdoğan were all conspicuously absent, all of them leaders of countries that are vital to the climate struggle. As an expert in leadership and governance, would you say we have the right kind of leadership for this COP27? Do we have the necessary diplomatic tools to reach agreements at this level?

As you say, we do have a problem here. I think it can be broken down into at least two parts. First, do we have the multilateral structures needed for major global agreements? We do. All these types of summits are conducted with the explicit, recognized, legitimate support of the United Nations and other international organizations that cooperate directly with it to make them possible.

But these structures are of little use for multinational problems if there is not an express will and ambition to address them on the part of the leaders representing the various sectors involved, that is, the clearly public-political sectors, the business sector, and the social sector.

With regard to your concern, I think the most critical element has to do with the political leadership. As we were saying, this issue is at least partially related to national or regional contexts and situations.

Allow me to give an example. The possibility that major agreements will be reached at the COP27 summit would be very different if, rather than current US President Joe Biden, former President Donald Trump had been in attendance. What do I mean by that? Well, in the absence of great leaders representing either large spaces in terms of population or major industrial and economic capabilities, agreements are very unlikely. What gives us some hope, for now, is that major global players such as China, the EU, and the US seem to have agreed to keep moving forward on precisely those points having to do with the energy transition and milestones linked to net-zero emissions.

A separate issue is whether we will be able to make the same progress without the commitment of large countries such as India, Brazil, or Russia. Here, the only hope is that this logic of the multilateral pull of committed major powers will manage to bring these more reticent leaders or countries on board, too.

In any case, this is what we have, and we have to make progress with it. Without this type of positive leadership, it is highly unlikely that any multilateral agreements will be successfully reached.

COP27 will be followed by COP15, which is perhaps less familiar to the general public. While COP27 focuses on the climate crisis, COP15 focuses on something you mentioned earlier, the biodiversity crisis. Do you think this current format is functional? Are they two separate things that should move forward in parallel or are they linked, related to each other?

The climate crisis and the biodiversity crisis are intrinsically linked, and we need to respond jointly and efficiently to both of them. COP27 is critical for nature, because it lays the groundwork for the development of the global framework for biodiversity, which will take place in Montreal, at COP15, the biodiversity convention, which will be held in mid-December.

Just as the climate emergency has triggered the fundamental goals of mitigation, adaptation, and resilience, the environmental emergency embodied by the accelerated global loss of biodiversity should also trigger goals, in this case, related to protection, conservation, and restoration.

Often, these biodiversity goals are not especially sensitive for sectors such as business, but they should be. It is worth recalling that 55% of the world’s GDP, with all that entails for the economy, is dependent on biodiversity. COP27 will thus be a crucial opportunity to understand the extent to which countries and companies include references to nature-based solutions in their national and corporate pledges and how they are strengthening national adaptation plans from there. It will also give us a chance to see the extent to which the key nature-related announcements made at COP26 are followed up on.

For better or worse, this summit remains the only forum in which the 196 signatory parties represented at it have the possibility and ability to negotiate, demand, and advance compliance with the Paris Agreement. It is also the place where developing countries and those most exposed to climate change can make their voices heard and their interests known, and where those countries that boycott progress will be most starkly exposed, because they will be the ones that do not go or that clearly express views contrary to these types of pledges.

The high participation of the private sector and parallel working sessions attended by substate and third-sector parties, such as NGOs, show that these forums have the potential to exert influence and to build important multisector alliances. They also have the potential to shine a light on issues such as human rights violations, especially as this summit is being held in Egypt, a country not exactly known for its defense of those rights.

I think this is, at least, what we should hope for right now, and what allows us to have moderate expectations that we will at least manage to make progress on these types of global challenges.