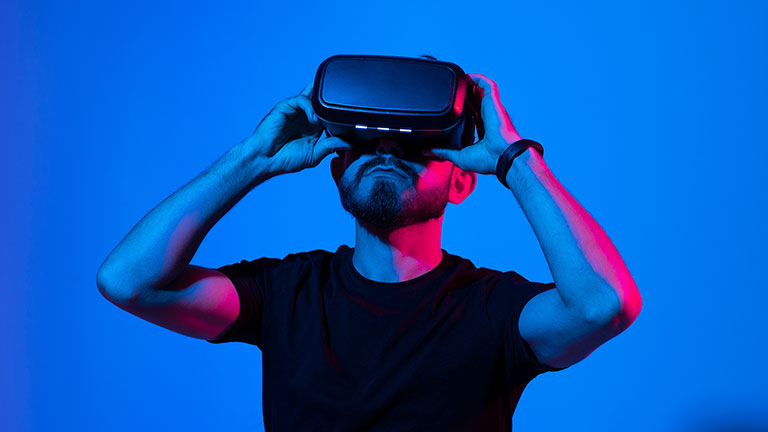 NFTs and the Metaverse: An unlimited business opportunity

While many people still do not fully understand what they are, the NFTs (Non-Fungible Tokens) market has generated more than $22 billion in sales in 2021 and all the indications are that this business will continue to expand relentlessly in 2022.

Recent evidence of this boom can be seen in the $464,000 paid by the rapper Eminem for an NFT with the caricature of a digital ape belonging to the Bored Ape Yacht Club collection. Other celebrities such as Jimmy Fallon, Stephen Curry and Britney Spears have also joined this new gold rush for crypto art, but surely the craziest transaction of the last few months was the one in which an NFT by the digital artist Beeple was auctioned at Christie’s for nearly $70 million. The work, a collage of 500 photographs in JPEG format, was purchased by the multimillionaire Vignesh Sundaresan, a nouveau riche known by the pseudonym MetaKovan in the cryptocurrency sector and an unlikely bidder in this type of auction.

As is often the case with new phenomena, the boom in NFTs has generated an impassioned debate, with strongly polarised opinions. On the one side, sceptics view this frenzy as no more than a bubble that is about to burst. On the other side, staunch defenders of NFTs foresee the beginning of a sweeping revolution, a change of paradigm on a par with the arrival of the Internet.

In order to try and understand the promises and the questions raised by this trend, Do Better has sought to analyse it with the help of two Esade lecturers on the programme "Innovation in Finance: Fintech and Blockchain”, Xavier Pérez Corominas and Eloi Noya. Both agree that NFTs are the future of digital ownership, and they predict that over the next few months NFTs will spread to all kinds of businesses, permanently transforming the global economy and driving the creation of the famous metaverses.

“NFTs were viewed as something for freaks until just a few months ago, when Mark Zuckerberg came out and said Facebook was changing its name to Meta,” observes the lecturer and entrepreneur Xavier Pérez Corominas, who is certain that the change of model towards the metaverse will go hand in hand with the use of NFTs. “The directors of Meta imagine a 3.0 web where there will be a virtual world full of virtual stores selling digital assets, and many of these will take the form of NFTs. The entire generation of young people will be ready to spend money on their virtual world avatar and this can only work with NFTs.”

This is why experts like Xavier Pérez Corominas believe the initial boom we have seen in the world of digital art is just a taste of what is to come. “We have witnessed the first phase of NFTs in digital art, but they are steadily going to penetrate other markets, such as music, audio, video, fashion, video games... It is a really big business, much bigger than people think. In the gaming market alone, for example, NFT sales will be worth billions.”

Given such forecasts, it is not surprising that big brands like Nike and Adidas have been among the first to jump on the bandwagon. In December, Adidas earned $23 million in just one afternoon with its first NFT collection. A few days later, Nike announced the acquisition of the RTKFT Studio and began to design digital trainers, convinced that very soon NFTs will move beyond the domain of collectors and bold investors to reach millions of consumers through the metaverse.

The high fashion brands are doing something very similar: this March, Balenciaga, Ralph Lauren and Gucci will all show at the First Fashion Week, which will be held in the metaverse of Decentraland in conjunction with the digital luxury platform UNXD. It was on this virtual catwalk that Dolce&Gabanna presented its NFT designs, setting a $6 million record for a nine-piece physical/digital collection.

“All these top fashion and luxury companies were already creating unique and valuable assets in the real world. Now they can easily transfer them to the digital world and to metaverses, whereupon they can begin to trade their digital assets in the form of NFTs,” said Xavier Pérez Corominas, who also manages KNFT Agency, a platform which specialises in advising companies that want to enter this market. "With the arrival of blockchain and NFTs, the revenue model of many companies has changed or will change soon. Many of them will become obsolete and disappear if they fail to adapt.”

A clear example of this new changing scenario can be seen with sports teams and leagues. Barça, Madrid, the Champions League and the NBA are just a few examples of the teams and leagues that have begun to explore this market. “First of all, the model of clubs and leagues was based on ticketing, then national TV rights arrived, followed by international rights, and finally the industry began to revolve round merchandising. These are models that have combined and complemented one another, and in each case the most recent model yielded more money than the previous one. In our agency, we believe that the fifth revenue model will come from the management of virtual communities and NFT sales. The problem facing the clubs is that they know this new model is about to arrive, but they don't know what they have to do.”

Revolution or another bubble?

In spite of the positive predictions of experts and the wave of optimism surrounding the future of NFTs, there are grounds for fearing that a speculative bubble may form which will end up bursting. Media such as Forbes and El País have questioned the boom in NFTs and late-night shows such as Saturday Night Live have even made parodies of the phenomenon.

“The business possibilities are infinite and that creates certain doubts,” Eloi Noya acknowledges. “It is very easy to create an NFT and so people will talk about the risk of a bubble. When something is so easy, it is normal for doubts to emerge that if many NFTs appear, they won't be worth anything, because there's nothing unique about them.”

Noya also warns of the dangers inherent in these types of investments because, as in the case of cryptocurrencies, in the end not all NFTs will yield a profit. “If people think the price of any NFT they buy will go up, they need to be careful. A detailed study should be made of whether these NFTs have any value and whether there is any demand for them, so they can be resold at a higher price in the future.”

Aside from the novelty and the usual speculation surrounding fads of this kind, what appears to be irrefutable is that thanks to blockchain technology NFTs are becoming the future of digital ownership. “A first application of NFTs is that they serve as a certificate of authenticity. An NFT confirms you are the sole owner of that digital asset,” Eloi Noya explains, while highlighting another important characteristic: its ease of transfer. “Up until now, Internet did not support the transfer of value. Thanks to blockchain technology, when I send you an NFT file, you become the only one who has it and it disappears from me. It can’t be duplicated and we can't both have it at the same time. In the real world, when we have a work of art or a property, there are always more difficulties when it comes to storing it, insuring it and transferring it to someone else. In contrast, in the digital world, with NFTs this can be done with just a click, transferring the ownership of something that may be worth millions from one electronic wallet to another.”