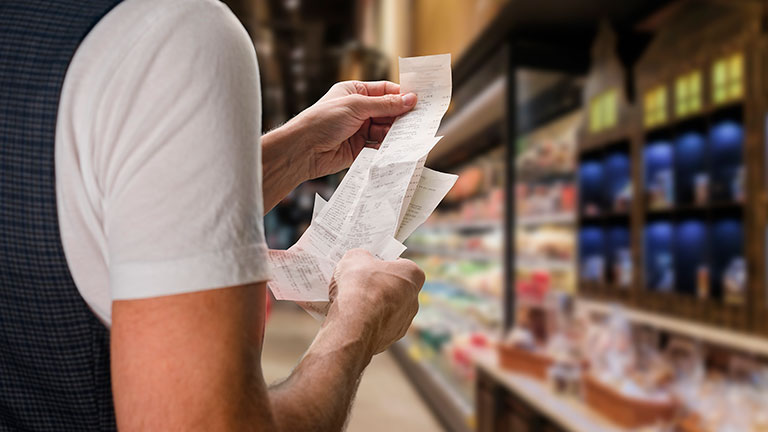 Spain is now facing an inflationary challenge without, for the first time, fully controlling the basic instrument to control it. There is a natural confidence that the European Central Bank will take the necessary measures to combat this round of inflation in coordination with Eurosystem member states – and indeed the ECB is already taking action. But while the inflationary challenge remains, it is worth asking what can be done to control inflation in other areas of public policy (or at least not feed inflationary spirals) and to mitigate its regressive impact. This question is even more relevant as we can begin to assess measures that the government has already implemented – as we did in this paper presented by EsadeEcPol on the 7 April.

The nature of current inflation

To assess these policies, we must begin by looking at the nature of the current round of inflation. In 2020, the price index for the Spanish economy was negative for nine successive months. The outbreak of the pandemic, the lockdown, and subsequent restrictions, meant that demand for some products (such as energy or tourism services) collapsed and with it the price index for the economy. The start of the vaccination campaign at the end of December meant that 2021 would be the year of recovery. Indeed, during the first months of the year, the increase in the consumer price index (CPI) reflected a recovery to pre-vaccination levels, but something changed from the second quarter onwards. In April, the inflation rate passed 2% and then accelerated to reach 6.5% in December. There were two principal causes: rising energy prices and bottlenecks in global supply chains. Both are largely explained by a strong recovery in demand after the worst moments of the pandemic, which was not matched by a corresponding increase in supply. Forecasts indicated that both factors would continue to drive inflation in 2022, but that this would begin to ease by the end of the year. However, at the end of February, following the invasion of Ukraine and further lockdowns in Asia, the situation worsened – and inflation was close to double digits. 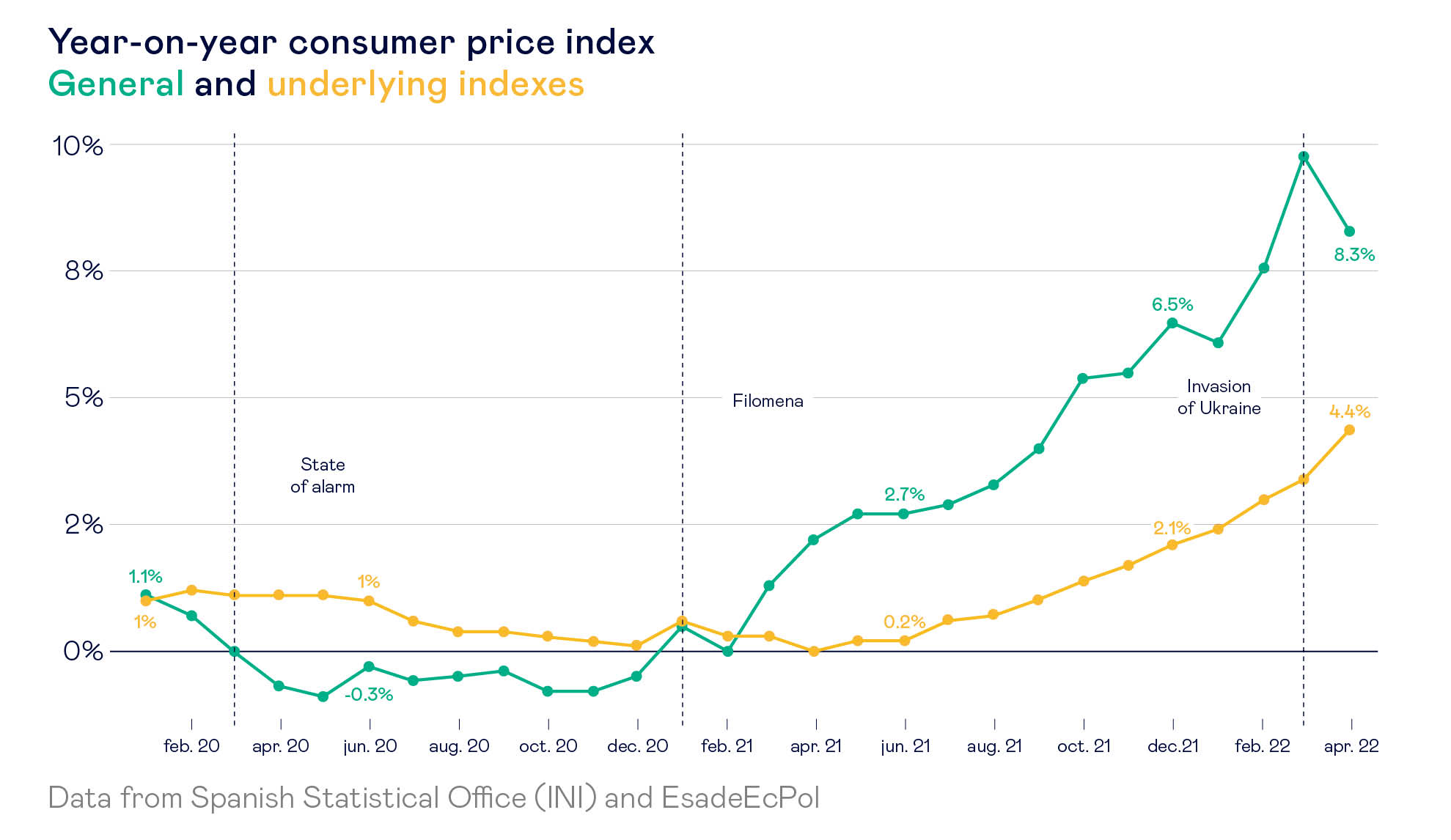 The question is: are we facing ‘ugly’ inflation? That is, an above-target inflation rate that sweeps away expectations and becomes persistent through wage and pricing behavior? The data says: ‘not yet’. This is indicated in Graph 1 by a four-point gap between the green general index and the underlying yellow index (which excludes unprocessed food and energy products). The difference between the two indicators is important and suggests that inflation is concentrated in specific categories – and we are not facing a general rise in prices. Graph 2 shows the contribution of the main product groups to the CPI. Energy products account for more than 70% of inflation, and the food and beverages group has also been pushing upwards since the beginning of this year. However, the sharp rise in core inflation means that we must be cautious and take action to prevent expectations from becoming unanchored and so driving an inflationary spiral. The latest statements by the president of the European Central Bank, Christine Lagarde, point in this direction. 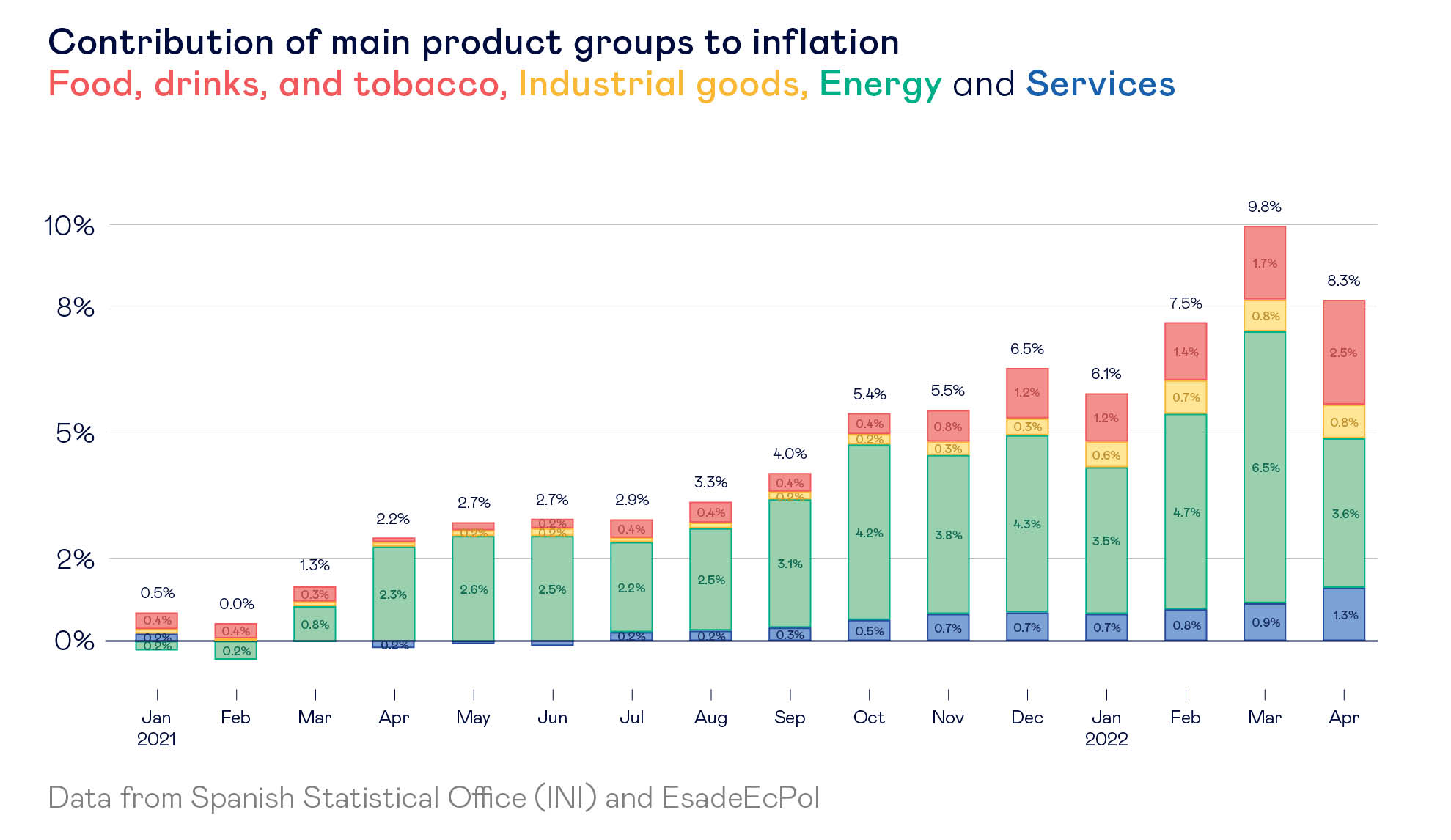 With energy as the original inflationary driver, actions have naturally been concentrated in this sector. Three such actions are especially important: the fuel subsidy; the establishment of an exception for Spain within the European energy pricing system; and the maintenance of discounts on household electricity bills.

The most important measure is the general subsidy of 20 cents per liter on fuel. The subsidy is temporary and although it is planned to end on 30 June, the possibility of an extension has already been raised. Service stations deduct the subsidy from the bill (supported by an advance payment mechanism managed by the tax agency). In theory, the government pays 15 of the 20 cents of the subsidy for large retailers, and all of the subsidy for small retailers.

We must wait a few more weeks to better gauge the effect this measure is having on inflation, but initial estimates suggest it can only reduce inflation by one percentage point. However, because that one point is tied to the base of the inflationary process (energy), it could help interrupt inflationary spirals and secondary effects (specifically, preventing increases in CPI-indexed state payments, such as pensions). However, the costs are considerable:

The same plan also includes more appropriate targeted policies, such as a refund of hydrocarbon tax for professional drivers, and direct aid to affected sectors. Direct aid is particularly attractive as it preserves the price signal that is necessary for advancing towards a decarbonized economy, while helping lower inflationary spirals.

The other major measure proposed to tackle inflation takes place at the European level and has been dubbed the ‘Iberian exception’. This measure exists because of the dysfunctionalities produced by the electricity pricing system in a period of high inflation. We assessed this measure in a joint paper published with other European think tanks that summarized and evaluated the national measures taken in response to the energy crisis caused by the Russian invasion of Ukraine. The international wholesale price of fuel is the central transmission mechanism for increases driven by the economic decoupling of the EU from Russia: if this price increases, then so will the purchase price for Spanish consumers in their homes (electricity and gas) and in their vehicles (gas). The marginalist system of electricity pricing amplifies this chain by setting a price for wholesale energy based on the highest price within each lot. It was initially designed to incentivize energy efficiency: fossil fuel power plants usually produce the highest prices (their variable costs being much higher than renewables). Thus, in theory, producers were incentivized to build renewable sources to produce energy to be sold at gas prices. This incentive, which continues today, produces soaring prices for consumers in a context of rising global prices.

This is why Spain and neighboring Portugal have been made exceptions within the electricity pricing system agreed by the EU. The exception is temporary (about 12 months) and allows the Spanish government to cap the wholesale natural gas price for the regulated part of the market from €80/cubic meter to €40 in the very short term and to €50 in the coming months. However, migration to the wholesale electricity market (the ‘marginalist’ system) is less certain. While the government expects the price per megawatt-hour (MWh) to fall to €130 from €200, other analysts and private companies see €170 as a more realistic figure. Therefore, the final effect on prices is not yet known. It is also unclear if the incentive to migrate towards renewables, that the marginalist system was designed to achieve, will be lessened.

Thirdly and lastly, the government has extended the application of a reduced value added tax (VAT) rate for electricity, and extended the program of discounts on electricity bills for the poorest consumers. Until the end of June (unless extended), the VAT rate on electricity is reduced from 21% to 10%; tax on electrical generation is suspended; and the maximum legal reduction of the ‘special electricity tax’ to 0.5% will remain in force (this is an anachronistic tax originally created to fund the gradual elimination of coal mining).

In addition, households can continue to benefit from the extension of a 60% discount for poor consumers, and 70% for the very poorest consumers. Families without children will now also qualify for these discounts. Given the considerable increase in electricity prices, a further extension of this discount may also be considered until the ‘Iberian exception’ is fully implemented – because the increase in electricity prices may have already nullified the initial discount. It is also essential to simplify the process for obtaining this discount, as well as making its existence better known. It is worth noting that the National Strategy Against Energy Poverty has opted for automating the process for granting discounts.

Price increases hit poor families harder because the percentage of family income spent on food and energy is greater. This final group of measures, especially discounts on electricity bills, has a redistributive dimension that shows that public decision-makers understand the enormous regressive effects of inflation, as we explained in this article on our blog. 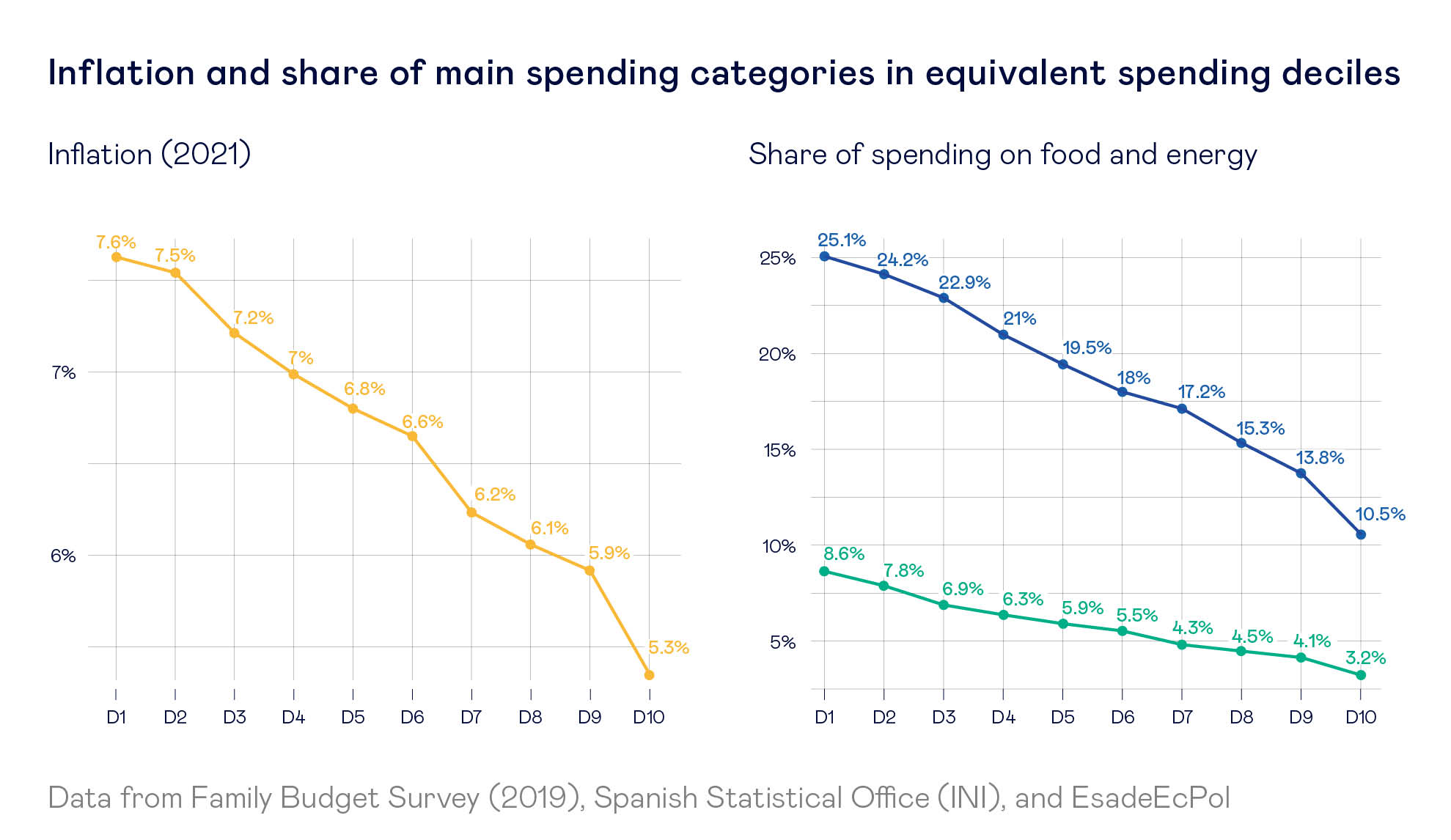 This regressive effect demands specific mitigation measures for the poorest. The electricity bill discount is the clearest example, but there are others worth mentioning.

An increase in the minimum income scheme has been implemented for three months (again, from April to June) for households already receiving this benefit. The problem is that relatively few have taken up the minimum income scheme: data from the Ministry of Social Inclusion shows that slightly less than one million households receive this benefit (and prior to the pandemic, the same ministry estimated that 2.3 million households qualify). Given the inflationary situation, it would be advisable to give an even higher priority to increasing the take-up rate. Of course, such minimum income schemes cushion the impact of inflation, however they do not eliminate it, and they may paradoxically feed inflation as these benefits imply an increase in purchasing power that could result in higher demand. This should not be an obstacle to implementation, since redistribution for these segments of the population must take precedence, but it may be an obstacle to managing expectations regarding the effects and expected levels of inflation.

In addition, as a temporary measure, the government has again limited (until June) the ability of property owners to raise rents to just two percent – and this cap may be extended. Since poorer households are likely to be tenants, this indirect price control is a measure that is both progressive and focused on cutting inflationary spirals. However, this measure is not without problems and could reduce the supply of rental properties if it is maintained for too long (in the long run, the most effective mechanism for lowering prices – or at least keeping them moderate – is an abundant supply of rental property). The cap is also a blow to the purchasing power of small property owners. These are the types of problems arising from price controls of any kind that we should remember before implementation.

In summary, although the burden of controlling inflation rightly falls on the monetary authority, there are levers available to the executive and legislative branches for cutting short-term price rises and managing their redistributive impact. But implementation brings a cost that must be carefully considered in each case. Measures that protect the poorest – such as improved access to electricity bill discounts and minimum income schemes – tend to be the easiest to justify in terms of cost.