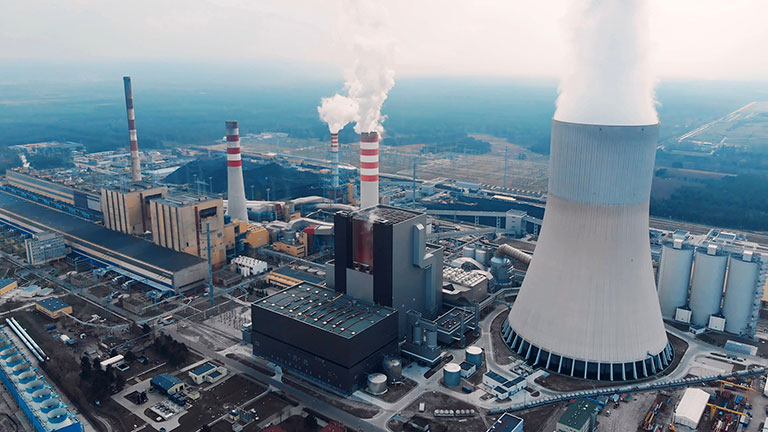 The scientific and political consensus around the need for prompt action to combat climate change has been a centerpiece of the 2021 international agenda—for good reason and notwithstanding the major distraction that COVID has represented. The urgency of the transition to a clean energy world is at the core of international climate agreements and ambitious national ‘net zero’ targets have been adopted in most countries.

The transition to clean energy, however, raises major questions concerning energy sourcing and prices. There is also as considerable uncertainty concerning the pace of the transition to clean energy and the potential implications of the speed of adjustment for collateral effects in terms of costs and availability of specific types of energy. These will need to be tracked closely by the many businesses that are directly affected by energy availability and cost and by the many more exposed to indirect effects.

Although reflecting a distinct bias, the perspective provided by the chief executive of Saudi Aramco, the world’s largest oil producer, is a useful one to keep in mind. Speaking recently at the World Petroleum Congress, he characterized the assumption that the world could switch to cleaner fuels quickly as deeply flawed and emphasized the risks that a hurried switch could produce energy insecurity and rampant inflation.

The Breakthrough Agenda, launched at the recent Climate Summit in Glasgow provides a framework for countries and businesses to join up and strengthen their actions every year, in every sector, through a coalition of leading public, private and public-private global initiatives. It represents yet another effort aimed at limiting the rise in global temperature to 1.5°C (compared to pre-industrial levels). To achieve that target global emissions must be halved by 2030 and ‘net zero’ emissions reached by 2050.

The magnitude of the challenge is underscored by the fact that 58% of all energy produced in the world today comes from the supply of two fossil fuel sources: coal and oil. A further 23% comes from natural gas—which may offer a helpful bridge in the transition but can only be a significant part of an eventual clean energy supply structure in as much as it gets decarbonized (using technology to capture the carbon dioxide generated while burning gas to generate power or heat for industry). Hence, the sources that today account for less than one-fifth of energy supply need to cover virtually all the energy needs in the long run. 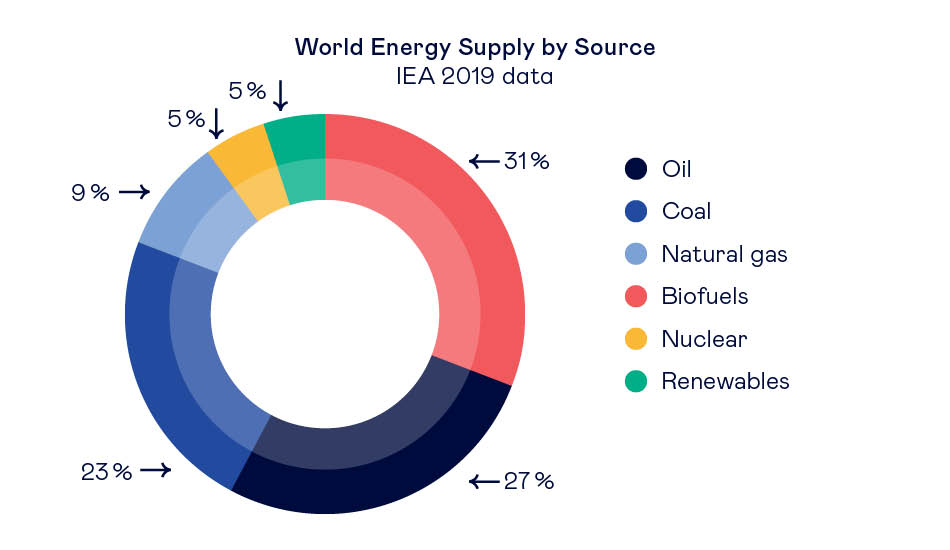 Governments everywhere, and especially in energy-importing countries, will have to scramble as they try to balance pledges to decarbonize with efforts to keep down energy availability and cost at reasonable levels for businesses and homes. The recent quintupling of natural gas prices in Western Europe has been described as a ‘perfect storm’ but could be a warning of the pitfalls facing the much-needed transition to clean energy. Given how visible energy prices are in everyday life, the pressures to contain them could well come into conflict with ‘net zero’ target dates and the clean energy emphasis.

On the demand side of the natural gas price burst there are two sets of what from other perspectives are good news: the rebounding of economic activity as business and consumers return to pre-pandemic activities; the fact that carbon offsets are pricey, and Europe has already been moving away from coal-fired plants and natural gas has provided a readily available alternative. In addition, a colder and longer-than-expected 2020 winter meant that European inventory levels were below average heading into the fall.

On the supply side, producers had suffered through 2020′s unprecedented downturn and have been slow to hike output.  On top of that, slow wind speeds and dry conditions weighed on renewables’ energy output—which in any case has proven harder to expand than had been projected for many countries. Natural gas also faces greater distribution hurdles than do the fossil fuels that it is transitionally expected to replace, and this has manifested itself in greater geographical disparities between gas prices—with, among the major economies, the US faring considerably better than the rest. 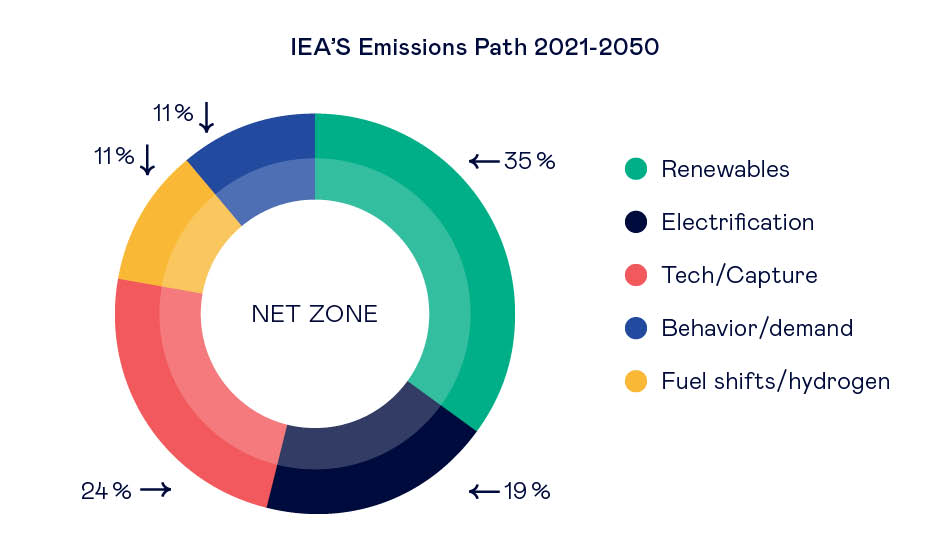 The International Energy Agency (IEA) produces estimates of the possible composition of global efforts towards net zero. The latest scenario shows the key challenges: promoting a major increase in the role of renewables; finding reliable capture/sequestration technologies and plans (critical for the ‘net’ to be meaningful); electrification; shifting to new fuels; and behavioral changes reducing energy demand. All will require major efforts but, in addition, electrification is like an onion with many layers. Electrification of vehicles will only make the important contribution towards reducing carbon emissions that it could if the sources of electricity generation change. Otherwise, electrification policies could backfire by promoting its diffusion before electricity is decarbonized.

The situation today is that the world still relies more on coal than on any other electricity generation fuel and that progress will only be made through a difficult transformation in the major economies that still rely primarily on coal for electricity generation. The many uncertainties surrounding the decarbonization of electricity also include the potential of new, safer nuclear energy and the progress with solar and wind power and other renewables beyond hydro which have so far not managed to significantly increase their share of global energy generation. 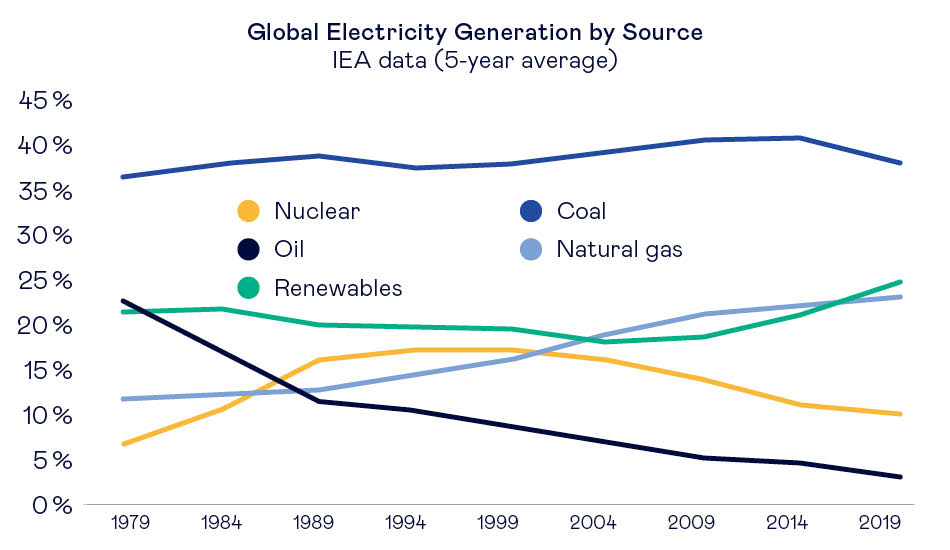 Global statistics, though, mask huge differences across countries. Progress in renewable power sources like solar and wind have been concentrated in a small number of countries (among the major economies only three—Germany, Spain and the UK—are generating at least one-quarter of their electricity from solar and wind power). China has been making fast progress, but the share is still only about one-tenth. As the chart shows, the role of coal remains a prominent feature and the major shifts in recent years have been the decline in oil and nuclear power and the increase reliance on natural gas.

The current situation in the US (in stark contrast with the global picture) shows the time that change requires—even under the right circumstances: in 1990 more than half of its electricity generation was coal-based and natural gas accounted for just over one-tenth; by 2020 coal accounted for less than one-fifth and natural gas plants generated two-fifths of the electricity. But natural gas, although a much cleaner source of energy than coal, is still not clean enough to meet ‘net zero’ goals. For instance, the EU recently announced its intention to turn the page on fossil fuels and move to cleaner energy sources--including replacing fossil gas with renewable and low carbon gases, like hydrogen, and developing or adapting the distribution infrastructure accordingly.

Natural gas, although a much cleaner source of energy than coal, is still not clean enough to meet ‘net zero’ goals

First, on land use, as ‘net zero’ commitments could lead to mass displacement of land uses (the sequestration estimates included in 2050 goals appear to amount to unrealistic land requirements) and biofuel incentives add further to the displacement—potentially causing food price inflation and even hunger. OXFAM, for instance, has analyzed the net zero targets of four of the big oil and gas producers and extrapolating that to the whole oil and gas sector, estimates that it could imply land requirements adding up to nearly one-third of the world’s 1.6million Ha of farmland.

Second, on jobs, as the skills requirements and location of renewable-related jobs are very different from those of fossil fuel extraction (even if the net effect on employment is close to zero, coal miners are very different—in background and demographics--from solar panel or wind turbine engineers). And third, on economic geography, as decarbonization will shift the different comparative advantages of countries regarding the costs and reliability of supply to energy-intensive industries.

The combined impact of the direct effects on energy prices and availability and of the indirect effects via land use, labor markets and locational advantages could be mounting as the necessary transition to clean energy progresses. Most companies will find that tracking them—and the uncertainties they will generate—must become an important part of their strategic radar.