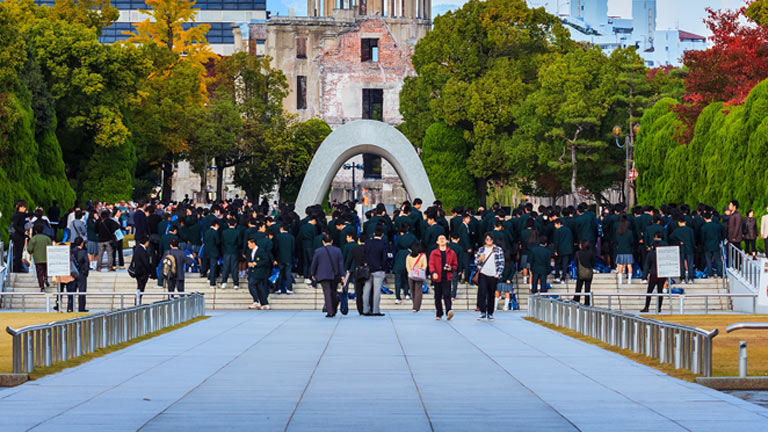 Current tensions in the nuclear landscape

It is 100 seconds to midnight. This is the time according to the Doomsday Clock: a symbol representing the likelihood of a man-made global catastrophe established by the Bulletin of the Atomic Scientists. This means that we are closer than ever to an apocalypse caused by nuclear war, which together with climate change is the main existential danger threatening humanity.

The reason why the clock’s hands are racing forward lies in the latest international developments in nuclear security.

The atomic bomb attacks on the cities of Hiroshima and Nagasaki in 1945 are part of our collective memory and embody the greatest direct security threat that humanity faces.

Nuclear bombs are considered – together with chemical and biological arms – to be weapons of mass destruction due to their extremely high lethality and non-discrimination between civilian and military targets.

Nuclear weapons are once again at the top of the international agenda. Many voices have long been warning of a resurgence of Cold War behaviour following possible interests in proliferation by several states and the reluctance of nuclear-weapon holders to complete their disarmament.

Before assuming and validating such diagnoses, it is worth asking who is encouraging a return to the nuclear age? Is a return to containment really one of the options? Are there alternatives?

American president, Donald Trump, is changing America’s nuclear policy. These changes have not been sudden and are based on public threats and open announcements of his plans and ideas.

However, these actions have not been carefully developed and tend to be the opposite of what most experts recommend.

Since his arrival in the White House in 2017, the nuclear game board has been shaken on several fronts. In the autumn of 2018, Washington announced its withdrawal from the Intermediate-Range Nuclear Forces Treaty (INF), which was signed by then Soviet and American presidents Mikhail Gorbachev and Ronald Reagan in 1987 with the aim of eliminating intermediate-range weapons and missiles.

By suspending the INF, the US will be able to deploy in Europe various types of missile that have been banned until now

Although this treaty had been previously breached by both states, its adoption was a historic milestone as, for the first time, both blocks agreed to eliminate an entire category of nuclear weapons, reduce their arsenals and allow on-site inspections to verify compliance.

Thus, the relatively recent American exit from the treaty, under the pretext of Russian non-compliance, reflects the current climate of tension and opens the door to a new arms race.

By suspending the INF, the US will be able to deploy in Europe various types of missile that have been banned until now; while Russia, which has now also withdrawn from the treaty, will be able to respond to American behaviour.

However, there are sources other than the historic rivalry between America and Russia that alarm the international community from a non-proliferation perspective.

In its face to face discussions with North Korea, the Trump administration surprised everyone with a policy of rapprochement, an approach that reached its peak with the Singapore summit in June 2018, and which continued in a second meeting between Trump and Kim Jong-un in early 2019.

The aim of these meetings was to work towards the complete denuclearisation of the Korean peninsula, but experts point out that the effect could be precisely the opposite, given the impulsiveness of both leaders and the fragility of their relationship.

Nonetheless, precisely because of President Trump’s unpredictability, it is possible that for the first time in history a North Korean leader is not certain that Washington will press the nuclear button if fighting begins along the border.

Most experts believe that it is a risky mistake for a nuclear power such as the United States to sit down and negotiate with – and so legitimise – a "rogue state" that violated the Treaty on the Non-Proliferation of Nuclear Weapons (NPT) and breached international law to establish a clandestine nuclear weapons programme.

Pyongyang has capitalised on the international cooperation and technological assistance it received for its nuclear programme.

Iran has also expressed interest – and shown its capacity in the proliferation of such weapons. The so-called "Iran Deal" is the other point of friction in this area, specifically since America decided to dissociate itself from the Joint Action Plan (JCPOA) and, with the approval of Congress, imposed new sanctions against Iran.

Despite the fact that the International Atomic Energy Agency (the agency in charge of verifying that Iran’s nuclear programme is exclusively peaceful) insists that Iran has respected the agreement signed in 2015 by Iran and the EU 3+3 Group (Germany, China, USA, France, Germany, UK and Russia), President Trump, continuing his dynamic of undoing the agreements reached by his predecessor, withdrew from the JCPOA. He claimed that the terms of the pact are not strict enough to guarantee that the Iran refrains from obtaining nuclear weapons.

Alternatives for the future

While the NPT obliges nuclear-weapon states to "pursue negotiations in good faith on effective measures relating to cessation of the nuclear arms race at an early date and to nuclear disarmament," it is not a treaty for general and complete disarmament, as demonstrated by the lack of progress towards that goal.

Among the initiatives taken in recent years to ban nuclear weapons, the adoption in 2017 of the Treaty on the Prohibition of Nuclear Weapons (TPNW) must be noted.

Although not yet in force, the Treaty on the Prohibition of Nuclear Weapons aims to ban and stigmatise nuclear weapons completely

Although not yet in force, TPNW aims to ban and stigmatise nuclear weapons completely, in the same way as previous treaties on anti-personnel mines or cluster bombs.

The signatories promise to reject nuclear strategies while encouraging others to follow their example. However, it is foreseeable that the TPNW will run aground on the refusal of the nuclear powers and their allies (mainly NATO members), who feel protected by the "security" provided by a nuclear umbrella.

The Iranian civil nuclear programme, the evolution of the JPCOA, and in particular, the attitude of the EU, must be considered.

America threatens to punish Iran, as well as punishing with secondary sanctions any nation that negotiates with Iran.

The resilience of the EU and its industry, as well as its diplomatic autonomy, will be decisive in the continuation and development of the agreement.

The IAEA calls on Iran to provide full and timely compliance with the nuclear agreement, especially after having denied the agency access to two locations where undeclared activities may be taking place.

The ultimate problem is not the president of a state, but an anachronistic system that allows nuclear weapons to be used as an element of strategic policy without any controls or conditions other than the free will of just one individual

Thus, although it is hard to see how JCPOA could be restored or a new deal reached, for those who want the pact to go ahead, the key is to find ways to compensate for America’s non-compliance and, in the case of the EU, to preserve its autonomy from extraterritorial sanctions.

The current picture, in addition to reflecting the urgency of lowering nuclear tensions, highlights the fact that no definitive solution to the threat and use of nuclear weapons has been reached.

Although President Trump and his nuclear policy have shaken a system that has been in place since the end of the Cold War, the current standoff reflects the lack of a comprehensive solution to the nuclear problem.

We must therefore continue to reflect on this problem, and we must do so in the long term by opting for an improvement of the international security system. The ultimate problem is not the president of a state, a figure who changes periodically, and so changes national nuclear policies at the same time.

The real threat is embodied by an anachronistic system that allows nuclear weapons to be used as an element of strategic policy without any controls or conditions other than the free will of just one individual.

Complete nuclear disarmament is still utopian. However, while progress is being made in this direction, the aim must be to improve the international security system so that launching or threatening a nuclear attack is considerably more difficult – if not impossible.