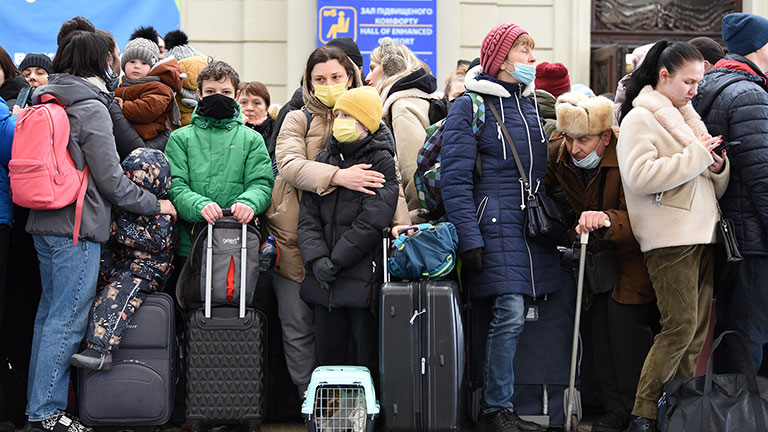 Tensions were rising between Ukraine and Russia for months, yet despite American warnings of an imminent invasion, the outbreak of war still came as a shock. It was a shock not because the Russian troop build-up was overlooked nor because bilateral relations had suddenly become fraught; it was a shock because the devastation of war came to the unaccustomed doorsteps of Europe.

The scenes coming out of Ukraine have been heartbreaking: families separated and displaced from their homes, cities in ruins, harrowing cries of those who have lost their loved ones, and millions fleeing to safety. These are the horrors that war brings about, no matter where it occurs. Yet, as betrayed in the media coverage of the Ukrainian conflict, it does matter where it occurs.

In ‘carefully’ choosing his words to describe the shocking scenes of war in Ukraine, Charlie D’Agata of CBS News said: “This isn’t a place, with all due respect, like Iraq or Afghanistan, which has seen conflict raging for decades. This is a relatively civilized, relatively European – I have to choose those words carefully too – city”. If that was choosing his words carefully, well, dare I say, I wished I could hear what he really meant to say. That wish came true.

Other journalists hastened to fill the gap and explain the definition of civilized: “We are not talking here about Syrians fleeing the bombing of the Syrian regime backed by Putin. We’re talking about Europeans leaving in cars that look like ours to save their lives”. Another chimed in that giving refuge to the fleeing Ukrainians was critical as “these are not obviously refugees looking to get away from areas in the Middle East that are still in a state of war”, while a former Ukrainian government official remarked that the war is “very emotional for me because I see European people with blue eyes and blonde hair being killed every day”.

Even NATO’s conundrum, whether to act or not act, was explicated by Julia Loffe on CNN to be premised on such terms: “It’s one thing for sarin gas to be used on people in far away Syria who are Muslim or who are of a different culture. What is Europe going to do when it’s on European soil, done to Europeans?” The responsibility to support victims of war was exposed to be conditional on their origin and their non-Muslimness, which are critical measures of their “civility”.

Such discourse of racial and hate-filled undertones, which has marred Western politics for decades, is clearly spilling over to the war coverage. It is pertinent to highlight that these were not far-right media outlets; they were the ‘progressive’, mainstream networks. I’d be also remiss to not highlight that none of the anchors or hosts of these programs were even perturbed by these utterings. They simply nodded along as the audience was informed that the victims of this conflict were humans, not uncivilized Muslim savages.

When subjected to conflict and foreign invasion, people exhibit similar tendencies of resilience, resistance, and the desire for safety, irrespective of the level of their civility

The fact that I examined a list of such coverage and to choose the aforementioned passages is perhaps an apt reflection of the blatant acceptance of such narratives. Such media accounts have naturalized wars as being endemic to Middle Eastern and African regions, portraying these as uncivilized lands occupied by creatures we cannot understand or relate with. In doing so, they absolve the role of Western powers in destabilizing these regions by “civilizing” them through bombs (yes, they target civilians also – again, I had to select one such case from a long list), supporting puppet governments, and sponsoring proxy wars.

Instead, as we now see in Ukraine, when subjected to conflict and foreign invasion, people exhibit similar tendencies of resilience, resistance, and the desire for safety, irrespective of the level of their civility. Ukrainians, led by President Zelenskyy, have garnered much adulation for fiercely fighting to protect their homeland against foreign invaders. Pictures of Ukrainians preparing Molotov cocktails, building barriers to slow Russian advances and confronting Russian soldiers are circulating on digital media. Others show the devastation of war, showing giant fireballs that reduce buildings to rubble. At times, however, images showing bombardments and young children confronting soldiers are not from the conflict in Ukraine, but from the one in Gaza. War, regardless of where it occurs, brings death and destruction; its victims, whether civilized or not, fight to protect their lives and dignity.

This is precisely the purpose of highlighting such coverage: it is not to belittle the plight of Ukrainians, but rather to underscore that they’re deserving of all the support they can be offered because they’re victims of war, not just because they’re, well, “civilized”.