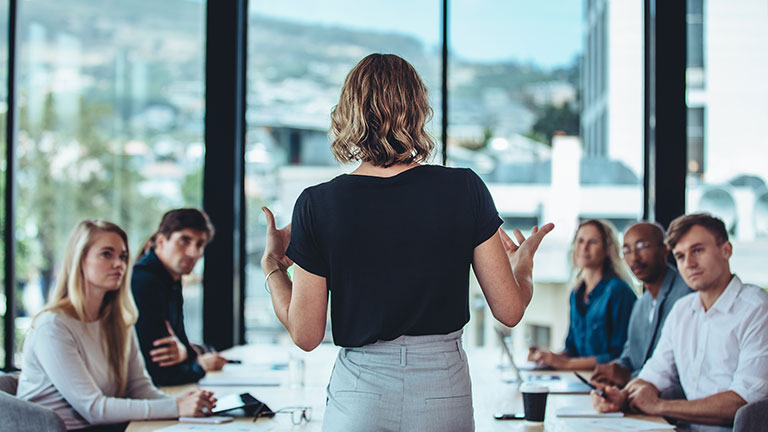 Women and leadership: gender equity as a catalyst for organizational resilience and competitiveness

Although gender equality is a recurring theme in the agenda of governments, companies, and organizations, and significant advances have been made in recent years, the truth is that figures do not deceive – only 6% of CEOs worldwide are women. Given this evidence, we must encourage an analysis of the situation, and discuss the actions needed to accelerate change and ensure that equity becomes a reality.

This is why the topic selected for the eighth session of the “Connecting through the workplace" cycle, sponsored by ISS Spain and the Esade Institute for Social Innovation, was the Role of Women in Leadership Positions. In this interesting meeting, we discussed with prominent leaders from the business and academic sectors the changes that are needed so that 50% of the population is also equitably represented in the leadership and management of organizations.

Progress is being made, but much more needs to be done

Mandatory quotas are beginning to bear fruit in the form of greater representativeness, both in governance and at decision-making levels. Greater social demands, especially from younger generations, have contributed to this change, as well as increased legislative and investor scrutiny and transparency in gender reporting and accountability. The adoption of non-financial information statements has forced companies to report salary equity ratios and female presence in senior positions. This has given visibility to gender equality and the pay gap. As a result, many firms became aware of their limitations in this area and decided to act.

In 2021, women held 33.49% of seats on the boards of directors of IBEX 35 companies (the benchmark index of the Madrid stock exchange), thus exceeding the target recommended by the National Securities Market Commission (CNMV). However, the imbalance in gender parity continues to be evident at management level, which is often where decisions are made, and also in other companies. Figures show there is still insufficient progress in non-IBEX companies (25.8% and so below the CNMV recommendation) and in decision-making management committees (where representation is only 18.32%).

There is still insufficient progress in non-IBEX companies and in decision-making management committees, where representation is only 18.32%

This situation was highlighted by Marta Colomina, director-general of the PwC Foundation: "We are better off than before. We have made progress in legislation; social changes mean that this issue is on the agenda of all companies. But we must remember that the IBEX 35 is an island; the data is more disperse for unlisted companies. We are talking about 10 points less in management positions and so the data is not as good as it seems," she said.

This situation is repeated globally. Some reports, such as that of the World Economic Forum, reveal that if the current trajectory continues, it would take 135.6 years to close the gender gap worldwide. According to other sources, it would take 200 years to achieve equity in the STEM field.

At the European level, the situation is similar, although there are marked differences between countries. According to the latest European Women on Boards report by Kantar Public, based on data from 668 relevant companies in 19 European countries, while 35% of seats on boards of directors of European companies are held by women, only 30% of these directors hold senior management positions. If we analyze executive decision-making positions, the percentage falls to 19%.

Spain has the ninth lowest score in the Gender Diversity Index among the 19 European countries covered in this analysis, and scores below average in almost every indicator. Moreover, there is a gap of more than 15 percentage points with the top country for female representation at executive level (CFO, CEO, or chair of boards of directors). Even when women obtain decision-making positions, there is gender segregation in the types of responsibilities and power quotas. Women continue to be underrepresented in areas that open the door to higher positions, such as operations, R&D, IT, or finance.

The figures bring us back to reality: not only are women left out of the center of decision-making, but they are also largely excluded from economic power. Business leadership in European nations is still dominated by men.

Talent and diversity are two fundamental aspects for organizations to be sustainable and robust in the long term. With this premise, gender equality policies could improve organizations while contributing to a fairer and more egalitarian society.

The advantages of women leading organizations and being represented at all hierarchical levels are evident. Numerous studies demonstrate the benefits of inclusion: higher productivity; greater attraction and retention of talent; increased innovation and creativity; enhanced corporate reputation; and more profits. According to a study by the International Labor Organization, which analyzed 13,000 companies worldwide, those firms with women in their management have increased profits by between 5 and 20%.

The same study points to the positive impact and enhanced flexibility and adaptability that characterize organizations with women in management during these two years of the pandemic. Skills that are traditionally more common among women, such as empathy, active listening, the ability to adapt and inspire others, as well as collaboration, communication, and emotional intelligence, have been essential leadership traits during the pandemic and will remain so for the future.

Belén Badía, director of people, communication, and systems at Uriach, called for greater commitment and promotion of equality policies from companies as levers for competitiveness and innovation, and also for greater visibility for women's roles in leadership positions. The lack of role models is a major problem due to the scarcity of references who can empower and inspire women to access positions of responsibility. "Women must be present to make female leadership visible and discuss gender equality. But the people who lead, those at the top, must be believers. We must constantly push, help, and collaborate”. This, she adds, must not be something that is "nice to have", but is a "must".

Including equity in corporate strategy is also essential for Raquel Manzano, district manager at ISS Spain: "We must focus on ensuring that this issue is on the table. Gender diversity and the empowerment of women, as indicated in Sustainable Development Goal 5 of the United Nations 2030 Agenda, should be a strategic focus for all organizations and companies”.

Raquel Manzano added that we must also remember that the pandemic disproportionately affected women. The need to innovate and take a broad perspective was vital during the pandemic and will continue to be so for the future. Diversity enables organizations to compete in a complex environment and helps them identify risks and opportunities – and so activate change in a more agile manner. Plurality, in its broadest sense, is a catalyst for innovation and resilience; it generates discussion; brings a greater richness of perspectives with the addition of different points of view, and therefore produces more creative and impactful solutions.

This is why equity, as well as diversity and inclusion, must be strategic priorities – with public commitments, defined metrics, and remuneration policies aligned with the achievement of objectives. Parity will only become a reality if it is included in company strategy, with clear goals and public undertakings. Above all, men in leadership positions must be included in this dialogue, so that change is accelerated.