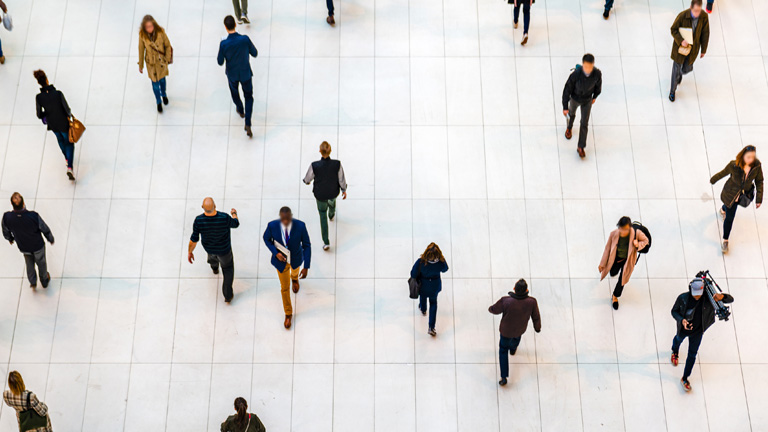 The major geo-economic transformation and re-shaping of global markets that has taken place over the last two decades is usually summarised as a process of globalisation and convergence. They are usually characterised by economic indicators: trade volume increases outpacing GDP, and faster growth in emerging market economies than in advanced ones. Digital technology has been a key enabler of globalisation—alongside steady (until recently) reductions in cross-border barriers.

The world is at a crossroads: widespread citizen dissatisfaction has shaken up the politics of many countries and of international relations as the economic value generated by globalisation has not been shared inclusively enough—and the 2020 pandemic has made inequality worse in many countries; conventional trade in goods and services is stalling, while the intangible component of the world economy grows; financial stability concerns have resurfaced as actions to tackle the 2020 pandemic have resulted in major increases in sovereign debt; … and more.

Widespread citizen dissatisfaction has shaken up the politics of many countries

This summary previews work in progress on a set of EsadeGeo scenarios for 2033. The purpose is to examine how different socio-economic and political dynamics could play out over the next dozen years and provide a basis for exploring how they could reshape markets and other aspects of the business context.

The building blocks for our scenarios involve identifying three premises and a dozen essential uncertainties that could drive change. The premises – demographics, digitalisation, and climate change – have some predictable elements, at least directionally, while also raising major questions about their role in the future.

With these three factors prominently in the background, we focused on a dozen essential uncertainties that are even less predictable to anchor and guide our exploration of alternative paths for the world in 2033.

Our dozen uncertainties are not meant to represent a comprehensive list of global issues but aim to spotlight the factors that will mostly shape economic and market dynamics and socio-economic outcomes over the next dozen years. One-off events (like a major terrorist attack, volcano explosion, etc.) and a possible new or resurgent pandemic are not considered in the construction of the scenarios.

The uncertainties can be organised around four categories:

Details on what each of these uncertainties involves and on the range of plausible 2033 outcomes that we have considered for each of them can be found at Navigating an uncertain world: Building blocks for 2033 scenarios.

Summaries of four scenarios for 2033

Our four scenarios present different views of how the world could evolve over the next twelve years as a result of divergent relative influences and outcomes of different shaping forces. For ease of reference, they are labelled with a single word which is also intended to denote differences in the pace of movement. A brief description conveys the gist of each scenario (with emphasis, for conciseness, on economic dynamics, although our scenarios have a broader scope) and then comparative perspectives provide an overview of the differing end situations in 2033.

A world drifting apart: By 2033, the geopolitical divide has deepened; international cooperation remains scant, and barriers to trade and financial flows have continued to expand. Policy decisions and geopolitical stances in major countries have created a downward spiral with major consequences for the pace and inclusiveness of growth. Consumer confidence has been at rock bottom for years, and basic forms of savings – notably gold – are preferred. Business confidence – and investment – is also very low,  not least because high public debt levels have crowded out access to finance in many countries.

Between 2021 and 2033, the global economy has grown at an average rate of 1.9%, much less than it would have had it grown at the pre-2020 average rate of 3.5% per annum. Weak growth in most advanced countries and a gradual decline of growth in emerging countries accounts for the overall slowdown and the combined effect has also led to small progress on income level convergence across countries.

Trade has grown even more slowly than the sluggish global economy and trade patterns have shifted quite radically away from global flows (and supply chains) and towards segmentation reflecting the major geo-political blocs that by 2030 already resemble a commercial cold war. The major change in trade patterns is reflected in the share of intra-regional trade which in 2033 accounts for two-thirds of global trade—compared to just one half pre-2020.

In this world of shifting boundaries, many widely held assumptions about the future have been shaken as the world’s bipolar superpower structure never took hold, shifting alliances became the norm, and manufacturing technology has reshaped labour markets, supply chains and productivity dynamics. Government interactions with businesses and with assertive, restless citizens have also been reshaped by the expansion and perils of digitalisation.

Europe had a rough time post-Brexit and the EU has seen fundamental differences growing between the old core and some of the newer members throughout the 2020s but, though weakened, it has managed to mostly stay together. China’s economy experienced a hard landing in the early 2020s. It drags down many other emerging countries, and the collapse of much of its banking system triggers a major global financial crisis around 2023-2024.

The global economy has grown at an average rate of 2.2%, but the saving grace is the adoption of ‘smart’ manufacturing technologies and its impact on productivity, so that into the 2030s the world seems to be on a modestly solid growth path (close to the ‘normal’ pre-2020 rates). Progress in convergence (reduction of income gaps across countries) has slowed down to a crawl and China’s GDP is still significantly below that of Europe, which also lags the US GDP.

In this world that is flowing ensemble, international relations are no longer contentious, and confrontations have become rare. As the situation evolves from bipolarity to multipolarity, progress is made, including some trial-and-error attempts, to create new platforms for global dialogue and cooperation. Domestic politics in many countries now address citizen demands for more participatory processes, and for privacy protection even if it comes at the expense of convenience and productivity. US administrations are involved in these new platforms but with limited enthusiasm, as international engagement is hard to treat as a priority in an ever-polarised and fractious political situation.

Into the 2030s, the world is on a sound growth path

By 2033, the global economy is somewhat larger than it would have been had the growth rates been in line with the pre-2020 average. Into the 2030s, the world is on a sound growth path. After a slow, difficult post-Covid recovery (including because of increased debt levels), a gradual thaw in intergovernmental tensions and recognition of the benefits of open competition have resulted in a re-globalisation of supply chains and lessened protectionist disruptions—creating a more stable basis for global economic activity.

Trade has grown significantly faster than GDP across the world so that the trade/GDP ratio has reached unprecedented heights—surpassing the peak of the pre-2008 years. Slower but steady growth in China, together with a strong economic performance in India and a few other emerging countries plus a modest but steady resurgence in Europe have resulted in fluid, unsegmented economic interactions. As a result, the GDP of the US and broader Europe are both roughly the same size with China’s GDP not far behind.

The rising tide in this world is due to recognition – after costly experiments with restrictive policies – of the benefits of collaboration, open markets and competition. Large corporations and mega cities have increased their clout and provided a solid basis for rapid technological adoption, productivity and economic growth that has created the fiscal space for determined climate action. The price has been the continued rise in income inequality in many countries and a greater divide between urban and rural areas—both factors fuelling unhappiness.

Vaccines and social discipline resulted in a solid rebound from the pandemic effects in many countries, and the reinvigoration of trade – including services – and resurgent global supply chains are fuelling improved economic efficiency in many sectors. The ratio of trade over GDP in 2033 reached record levels and most global trade is taking place across regions—with the share of intra-regional trade dropping from about 50% pre-2020 to just over 40% in 2033. Economic growth has been strong throughout and looks set to continue into the 2030s.

The economies of Europe, the US and China are now of equal size—each accounting for just over one-fifth of the world’s economy. Disparities across countries continue to be reduced, as most parts of the world benefit from revitalised trade—with a positive impact on exporters of manufactured goods, services and commodities alike. The exception are oil-dependent countries, as prices stabilise initially around $40 and then keep declining to $25 because of a greater emphasis on renewables, conservation and reduced emissions.

The range of situations represented by the scenarios can be visualised across various dimensions. Here are three examples—all of them purely illustrative attempts at summarising slices of the situations in 2033.

The first one sketches the situation across scenarios along two broad dimensions. The comparison suggests that improved international cooperation and the related productivity improvements have generally positive effects on prosperity, though more is not always necessarily better as other factors – notably those affecting the inclusiveness of growth – also have a significant impact. 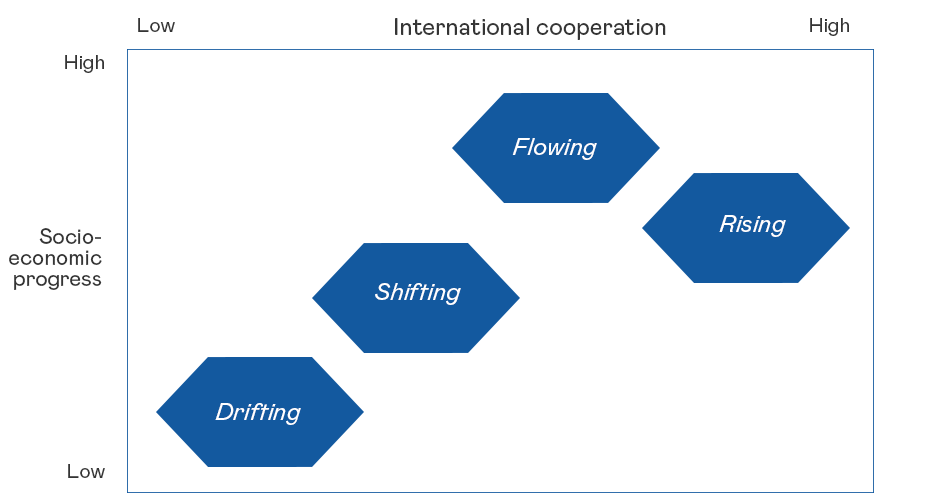 The second one roughly illustrates the kind of global economic growth path differences envisaged for each scenario. Besides showing how the key factors shaping each scenario will affect economic growth between now and 2033, this chart provides an indication of the prospects for growth over the longer term that result from each scenario. Rising is the fastest growing scenario all along and offers the best prospects for the rest of the 2030s, with Flowing having a similar path though at more moderate growth rates. Shifting shows weaker growth than Drifting over the next few years but its prospects for longer-term growth look considerably better than those of Drifting. 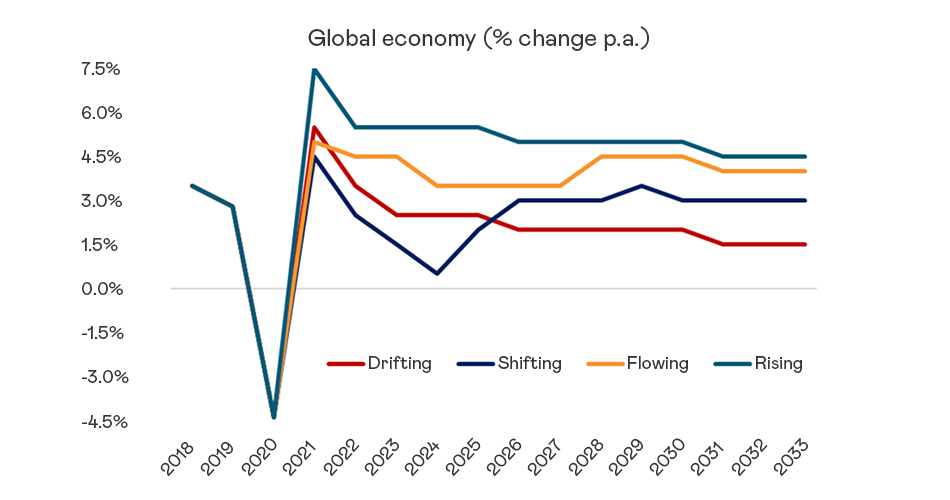 Differences in real GDP growth rates across our four scenarios may not seem very impressive but they become clear when considering what the cumulative impact could be over a dozen years. The gap between the lowest growth scenario (Drifting) and the highest growth scenario (Rising) in the size of the 2033 global economy is $51 trillion.

For perspective: $1 trillion is the size of the whole economy of Indonesia or Mexico … and all the countries in the world – except these two plus 14 others – have GDP below $1 trillion; and with $1 trillion you could buy all the new cars sold in the world in half a year … or all the airplanes sold by Airbus and Boeing combined over five years.

Finally, as noted above, the inclusiveness of growth also differs across scenarios, and this can be illustrated by their impact on income inequality. The importance of this cannot be overemphasised, given that in nearly 80 countries (accounting for 40% of countries but 70% of the world’s population) income inequality has increased significantly over the last 20 years. Two of our scenarios see continued increases in inequality through 2033.

Two of our scenarios see continued increases in inequality through 2033

These scenarios are intended to provide a useful basis for exploring “what if” situations across different dimensions, including markets, and serve to explore potential challenges and opportunities against which to pressure-test strategic options for businesses and other organisations. The differing outcomes are also a high-level reminder of the stakes at play as we make choices in terms of policy and other behavioural paths.