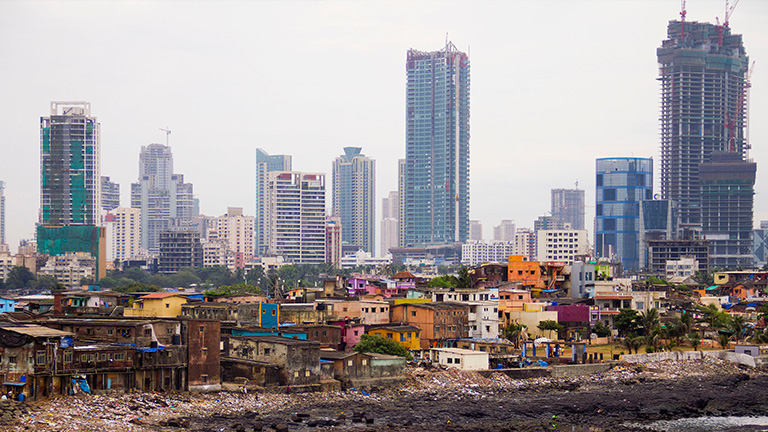 October 17th is the International Day for Eradication of Poverty. In the 35 years since the day’s origins, when over 100,000 people gathered in the Trocadéro in Paris in 1987 to honor victims of poverty, violence, and hunger, how much has changed?

According to the United Nations, the percentage of the world’s population living in extreme poverty – defined as living on less than $1.90 a day - dropped from 36 percent in 1990 to 10 percent in 2015. But the UN target to eradicate global poverty by 2030 has been dealt a significant blow by the Covid-19 pandemic.

During the first two years of the pandemic, over 160 million more people were plunged into poverty. At the same time, the world’s 10 richest men doubled their fortunes at a rate of $15,000 per second, or $1.3 billion a day.

“If these ten men were to lose 99.999 percent of their wealth tomorrow, they would still be richer than 99 percent of all the people on this planet,” said Oxfam International’s executive director Gabriela Bucher. “They now have six times more wealth than the poorest 3.1 billion people.”

Inequality is a political choice

According to the 2022 World Inequality Report, despite the pre-Covid decline in the number of people living in poverty, global wealth inequality has been steadily increasing since the 1980s.

“The rise has not been uniform,” says the report. “Certain countries have experienced spectacular increases in inequality (including the US, Russia, and India) while others (European countries and China) have experienced relatively smaller rises. These differences confirm that inequality is not inevitable, it is a political choice.”

Globalization and digitalization have done little to close this gap: global inequalities are the same today as they were at the peak of Western imperialism in the early 20th century.

“The world is at a crossroads,” say Enrique Rueda, Angel Saz Carranza, and Tirso Virgós from EsadeGeo. “Widespread citizen dissatisfaction has shaken up the politics of many countries and of international relations as the economic value generated by globalization has not been shared inclusively enough.

“The pandemic has made inequality worse in many countries; conventional trade in goods and services is stalling, while the intangible component of the world economy grows and financial stability concerns have resulted in major increases in sovereign debt.”

The large gap in private wealth and public wealth in rich countries, which has grown significantly over the last several decades, has had a major impact on the ability of states to tackle growing inequality.

“This trend has been magnified by the Covid crisis, during which governments borrowed the equivalent of 10-20% of GDP, essentially from the private sector,” says the World Inequality Report. “The currently low wealth of governments has important implications for state capacities to tackle inequality in the future, as well as the key challenges of the 21st century such as climate change.”

But according to a report compiled for EsadeGov by 27 academics, experts, and professionals in the public and private sectors, the private sector has a valid part to play in delivering vital social services.

"The discussion about public-private partnerships is still tethered to the classic dichotomy of public vs private, which questions the legitimacy of public services being provided by public-private ventures," says Mónica Reig, associate director of EsadeGov and one of the authors of the report.

The authors continue: “Public-private alliances allow strategic cooperation between different sectors, acting as a complement to cultures, technical skills, resources, and knowledge to create social value. Against this backdrop, the UN sustainable development goals may offer an opportunity to move beyond the futile debate about the dichotomy between the public and private sectors and contemplate the need for inter-organizational partnerships able to make a contribution to society.”

Do good, do better

"At times, the public authorities regard companies as rather unethical, corruptible, and only interested in maximizing profits,” adds Reig.

And with the growing wealth gap between the world’s richest CEOs and their employees, and the increasing levels of industrial action in pursuit of a living wage, it’s not hard to see why.

But according to Dimo Ringov, associate professor in the Department of Strategy and General Management at Esade, it is possible to operate successful, profitable businesses while also contributing to the eradication of poverty.

"Businesses can both do well and do good, they can be profitable while also helping lift communities out of poverty," he says. "The key is to develop scalable business solutions that can also improve the lot of the have-nots."

In research carried out with Myrto Chliova, Ringov identified six conditions for business success in the face of the significant social and economic challenges faced by the “bottom of the economic pyramid”:

Using this template, Ringov and Chliova suggest, allows replication and scalability that helps businesses to grow while alleviating poverty.

And following a business model focused on supporting the “bottom of the pyramid”, rather than the top one percent, could help meet UN targets to “end poverty in all its forms, everywhere, by 2030.”