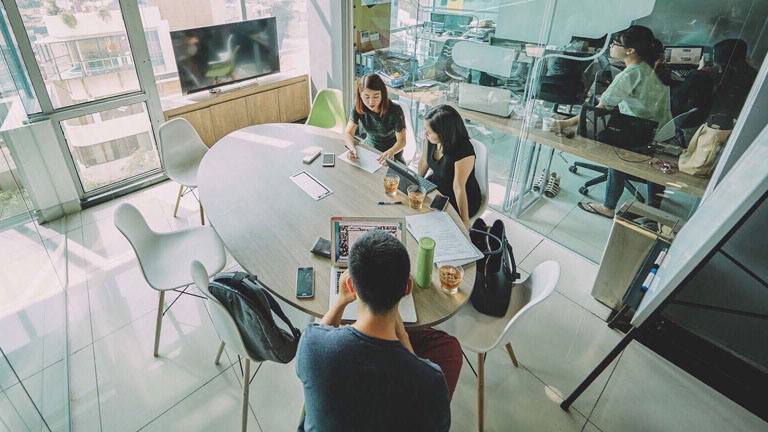 The career ladder is dead: Long live the jungle gym

The traditional career model of a steady trajectory within a single organisation is under pressure. Factors shaking this classical career ladder in recent years include global economic instability, startup culture and the way business is funded. There has also been the impact of trends like the gig economy and location-independent working, with technology offering much wider geographical scope both for job seekers and hirers.

Increasing numbers of people from every generation are carving out meaningful, fulfilling and rewarding working lives that embrace this new-found flexibility positively. And furthermore, the experience of doing so is helping them to build competencies that employers value along the way.

New research in the Journal of Vocational Behaviour explores the personal characteristics and values of those with "protean career orientation" (PCO), an attitude by which individuals are characterised as having a strong sense of identity and personal values that guide their career decisions. Joan M. Batista-Foguet from Esade Business School's Department of People Management and Organisation collaborated with Laura Cortellazzo, Sara Bonesso and Fabrizio Gerli from the University of Venice's Department of Management, tracked a cohort of Italian graduates as they entered the job market to investigate the impact of these tendencies on the paths of individuals through life and work.

By assessing their degree of PCO-connected tendencies on a range of inventories and comparing the outcomes against their early career activities, they were able to spot positive connections between the two.

The study was praised by CREIO (Consortium for Research on Emotional Intelligence in Organisations) president Cary Cherniss and by Richard E. Boyatzis, who is a visiting professor at Esade and one of the world's leading experts in leadership development and emotional intelligence. Prof. Boyatzis has previously been instrumental in setting up academic collaborations with Esade's Prof. Batista-Foguet via Ca' Foscari University of Venice, resulting in a co-directed Esade-Ca' Foscari Double PhD degree by one of the research's other authors, Laura Cortellazzo.

The research highlighted the fact that those with PCO are more inclined to take ownership of their professional futures. They tend to make value-driven choices that reflect a personal search for meaning and self-actualisation. Such people don't regard employers or line managers as paternalistic sources of professional development, progression and regular salary increases.

Instead, as a response to volatile and unpredictable employment conditions, more and more people are charting their own path through the world of value creation. They are just as likely to make their next move outside their present organisation, if that is the best fit.

While this trend has been building since the 70s, it's likely that the proliferation of communication and collaboration technology, combined with economic upheavals and financial crises in recent decades, have all played a part in the rise of this "employee-preneur" mentality. Other factors include the erosion of traditional unionisation and employment protection law in many areas.

The researchers make it clear that successful implementation of PCO demands the cultivation of high levels of self-awareness and adaptability. It requires the individual to create structure and direction for themselves in their career, even though that direction may be far from a straight line. It can involve complete changes of orientation, retraining and a commitment to continual learning, in order to achieve "success" – regardless of the individualised way that success might be measured and defined.

By linking career growth to personal growth in this way, people can find fulfilling and value-driven careers in any line of work – or indeed by holding more than one role simultaneously.

It’s a very different profile from the traditional model of a careerist high-flier. Embodying a PCO means being personally resilient and generally optimistic: in other words, having a growth mindset. Being able to view challenges with positive expectation, and every failure as a lesson for next time, is essential when you don't have a job for life with a gold watch waiting at the end of it, and you don't have a big bad boss to take the blame for everything.

Unsurprisingly the researchers found a strong correlation between the personal qualities that PCO individuals demonstrate and the things that make someone a great hire in many roles: tenacity, a results-orientated outlook rather than being a clock-watcher and an ability to set and pursue goals. All of which, of course, are important attributes in the job market.

In their findings, the researchers show that those students oriented towards a protean career are likely to have higher perceived and also actual employability.

As the world pivots on another inflection point for business innovation and success, with everything pointing to yet greater uncertainty for traditional jobs and career paths, it's clear that the behavioural competencies of PCO individuals will give them a significant advantage in competing for flexible roles going forward. This could potentially shift the balance of power in recruitment and retention situations, especially in a world that has proved that remote working is no obstacle to most knowledge-worker positions.

Employers will have to find ways to appeal to and motivate those who are driven by more than money or status and promises of long-term job security, if they are going to attract those who have the most to offer their organisations.

This will include putting greater emphasis on supporting individual goals and objectives, as well as being intentional and explicit about their company culture to attract those who are best going to feel they will fit. Such approaches are already evident in scarcity environments such as specialist software development. In such areas, recruitment advertising pays significant attention to selling the atmosphere and perks and intrinsic rewards of being part of their team – and it’s going to get more difficult to do this with integrity in a remote-first business future. How will these companies adapt when they can no longer rely on the presence of beanbags and beer fridges to show applicants what a cool and fun work place they have to offer them?

The role of mentors and educators

When it comes to empowering and supporting young people to enter that changing marketplace, there will be lessons for career advisors and mentors too. As this research was partly funded by ERASMUS, the future prospects for tomorrow’s workers will be positively influenced by guidance that doesn’t rely on outdated models of jobs-for-life and linear careers.

Instead, they will be encouraged to cultivate a flexible, resilient, creative and growth-oriented mindset – one that will serve them well in uncertain times, wherever their non-linear career path takes them.