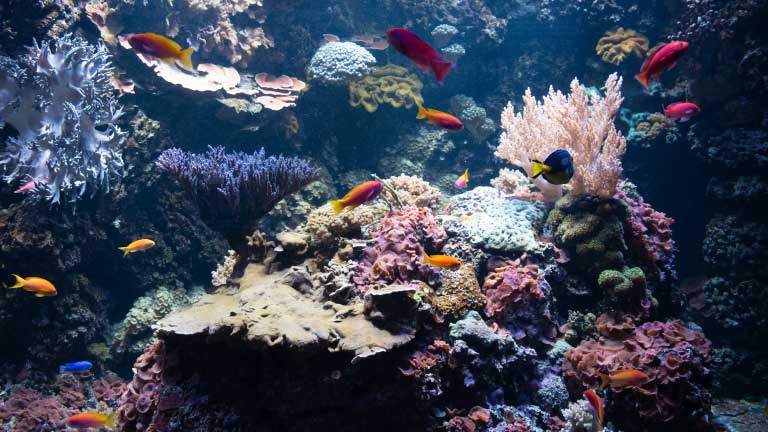 The ocean provides most of the planet’s life-supporting environment and is a fundamental player in the regulation of our climate, containing about 97% of the Earth’s water.

All people on Earth depend directly or indirectly on the ocean, but the rapid accumulation of atmospheric greenhouse gases from human activities as well as multiple direct anthropogenic pressures (plastics, marine traffic, overfishing, habitat alteration...) are having profound effects on the very fundamental processes that regulate how it functions, such as its physics, chemistry, productivity and biodiversity.

So, our oceans are changing rapidly in terms of temperature, carbon content and pH (a process called ocean acidification) and also decreasing in oxygen content (deoxygenation).

Not only do these effects threaten marine ecosystems, amongst which are the longest living inhabitants of the planet that are emblematic for humankind, but they also alter the ocean’s ability to regulate the climate and safeguard the future of many species, including ourselves.

Observations already show changes in the geographical ranges of marine species and shifts in growing seasons, as well as in the diversity and abundance of species communities.

We are living in a time of drastic changes in weather patterns, and with extreme events increasing in frequency. In the history of Earth, some mass extensions have been associated with carbon cycle disturbances linked to a naturally-occurring large emission of greenhouse gases (e.g. big volcanic events).

Although the planet’s past contains no perfect previous equivalent of the modern ongoing CO2-induced ocean changes, there is serious concern about the expected rapid transformation of ocean and coastal systems with lower productivity, species diversity loss and highly altered species distribution. Already there is no ocean on the entire planet that has not been affected by humans.

Most global warming (>90%) generated by accelerated human CO2 emissions is accumulating in the ocean, which has an enormous heat capacity. The ocean warming trend is well documented and it is happening at a faster rate than older estimates suggested. By the end of this century it could have absorbed 5 to 7 times more heat compared to observed changes between 1970 and the present.

This is dramatic since it will have consequences on many processes such as nutrient cycles and organisms (e.g. primary producers). The warming ocean is impacting fish stocks, with implications for food production and human communities.

The warming ocean is impacting fish stocks, with implications for food production and human communities

This is especially true for countries that depend on marine protein for nutrition and that need urgent strategies to minimise the consequences, since they also lack effectiveness in terms of governance of the ocean and fish stocks.

Healthy oceans are fundamental for humankind for sustainable development as well as poverty reduction, food security, nutrition and climate resilience.

In nature, changes don’t happen in isolation, and not only is the ocean warming but other major changes are also happening due to climate change and direct human activities (overall this is what is meant by “multi-stressors”). The ocean is, in fact, also removing some of the excess CO2 from the air, at a rate which has continued to rise in the last two decades in response to the increasing concentration of CO2 in the atmosphere.

This natural process of absorbing and dissolving CO2  in sea water is now happening at such a high rate that our increasingly acidifying oceans are making many marine species and ecosystems ever more vulnerable.

When we started to study this process, the focus was mainly on marine organisms that calcify, since acidification is interfering with the natural process of building hard exterior shell skeletons (exoskeletons), a biological capability developed over millions of years of evolution.

Corals, plankton and shellfish are particularly affected when it comes to building their shells and skeletal structures, but this acidification stressor is also exacerbated by other existing physiological stresses such as the reduction of oxygen in seawater. This has an effect on respiration and reproduction, reduces growth and survival rates during the early life stages of some species and even impacts on fish behaviour.

Cumulative impacts particularly in coastal regions, such as urban discharges, agricultural runoff and plastic waste, weaken the ability of the ocean and coasts to maintain critically important ecosystems.

I work with plankton, and when I am sampling it is very alarming to note that it is now impossible to sample for plankton without also catching microplastics as part of the seawater habitat and food webs. And this is the case whether the seawater comes from highly-populated coastal regions or pristine areas thousands of miles away from humans.

Although there are a lot of unknowns about microplastic dispersion and its impacts on health, there is major concern about the multiple and combined effects it may have, since concentrations are expected to increase drastically and we still need to understand the primary and secondary sources of the microplastics which end up in the oceans.

So, as regards climate change and other human activities affecting the ocean, we are now aware of what needs to be done to improve the situation. Action is needed to modify the culture of pure exploitation without consideration for the consequences, and to come up with science-based solutions linked to societal wellbeing for present and future generations.

A first attempt in abstracting a regenerative business model framework