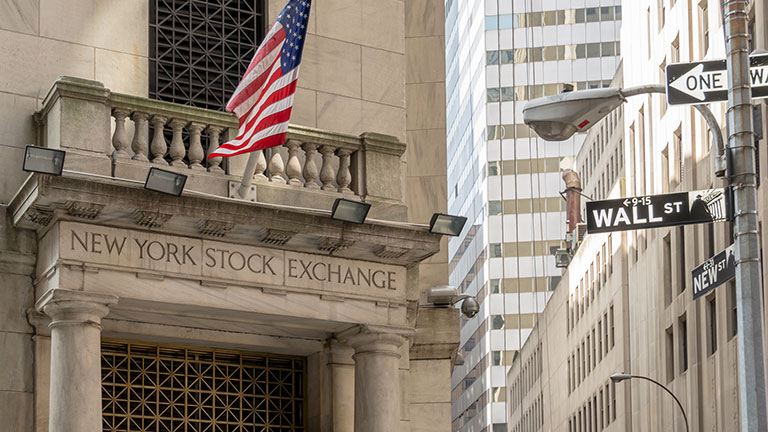 While measures of globalization have generally focused on trade, there is another dynamic at play with pervasive implications: the expansion of the value of listed equities; and the parallel concentration of transactions in the hands of a few players and in stock exchanges in the USA. The quantitative trends provide useful background, but it is the underlying dynamic of market power concentration that bears watching for its potential implications for companies considering stock market listings or additional equity issues and for investors—both individual and institutional.

In recent years there has been a significant increase in the real value of the market capitalization of listed companies. Although the roller coaster of nominal stock prices tends to obscure trends the significance of the increase becomes clear when adjusting nominal values using the global GDP deflator and tracking a 5–year rolling average. In parallel with this large increase in the real value of listed equities there have been significant changes in the transactional location, management, and ownership of these assets.

In current USD terms, market capitalization is currently about the same size as the global GDP. The trend in the market cap/GDP ratio (using 5-year averages to smooth out crisis and recovery roller coasters) shows that in the 2014-2018 period it was at a level like the 100% of 1988-2002 (a relatively high point including the “dot com” exuberance); it increased significantly after the 2008-2009 crisis and then again (though not yet captured by the statistics) after the 2020 pandemic crisis. These increases show the expanding value of listed companies (reflecting the combined effect of more companies being listed and their value rising). The increases are noteworthy because overall the last two decades were a period of significant global economic growth—which explains why the real value of listed equities has increased significantly (by about 50%) as the chart above shows.

Even more significant as a trend has been the increase in the market cap/GDP ratio in the US, even as its share of the global economy was declining because of the faster pace of growth elsewhere—notably in East Asia. This indicates that much of the increase in the real global value of market capitalization has taken place in the US-based exchanges, where many global companies (regardless of their home base) have chosen to list their stock. US stock markets is also where volatility has tended to be highest—possibly because transaction costs are relatively low—both with respect to the past and to most other stock markets.

Potentially even more significant than the size and transactional location of listed equities is another aspect of this dynamic: the concentration of assets under management into funds (mutual and exchange-traded) at the expense of individual stock picking by investors AND the parallel concentration in the hands of a few asset managers of amounts invested in these funds. The combined effect of the explosion of the intermediation of equity asset ownership through mutual funds and exchange-traded funds (ETFs) and the rapid lustering of assets in the hands of a few managers has resulted in a thorough overhaul of investment channels.

The top 5 managers have increased the size of their holding eight-fold in less than 20 years, from $3 trillion to $24 trillion

ETFs have played a major role—the value of the equity assets they contain has risen twelve-fold over the last 15 years—and it has not been at the expense of equity mutual funds which almost trebled in value during that period but in addition to their expansion. Alongside this expansion there have been two developments: the shift from active to passive investment (driven by the proliferation of indexes the composition of which ETFs are designed to mimic); and the reduction in fees and other transactions costs charged by both mutual funds and, especially, ETFs—which are just over half, as a share of assets managed, of what they were 15 years ago. 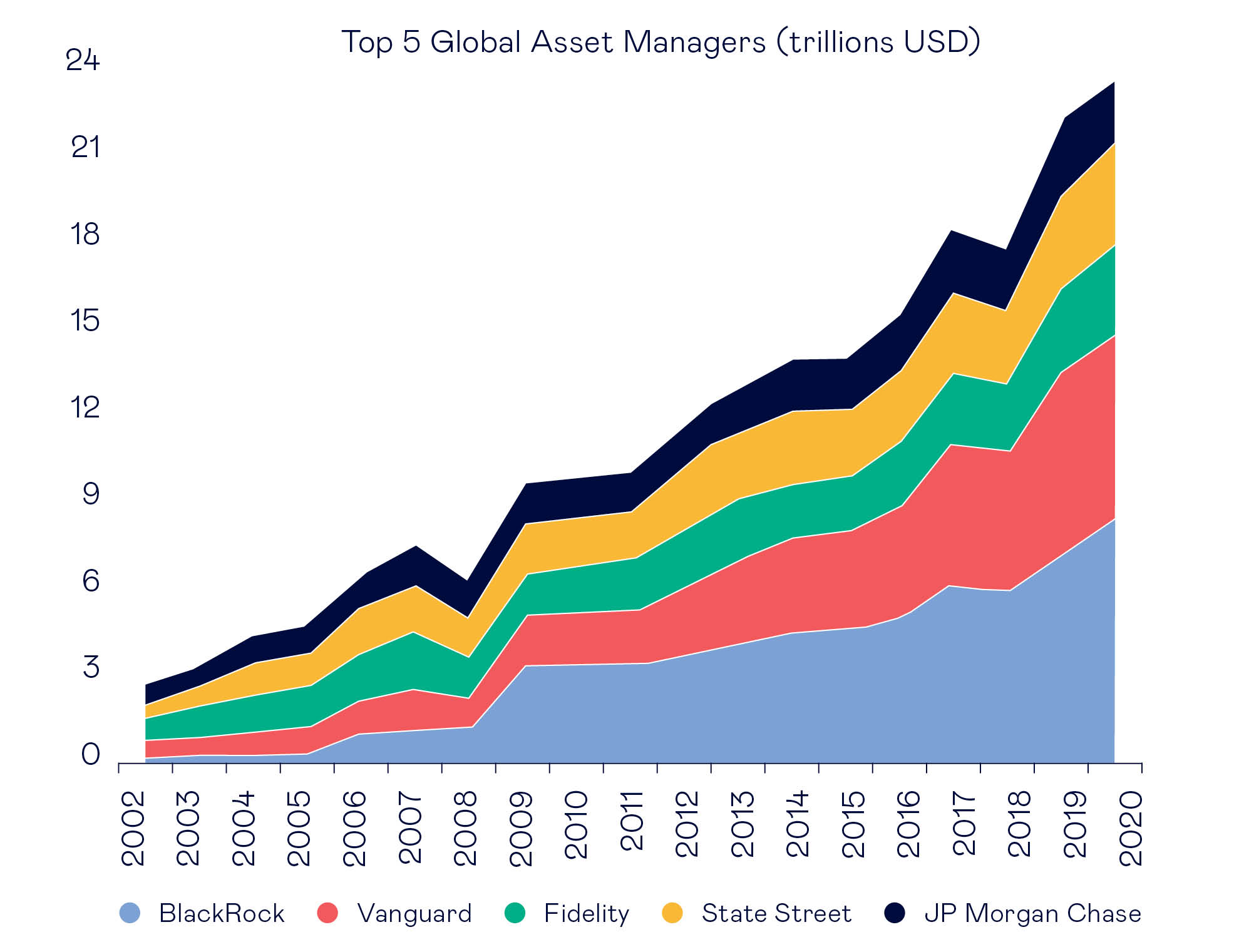 The move towards more institutional investment mechanisms (fueled, at least in the US, by the shift from traditional pensions plans to individual retirement accounts) created fertile ground for a very rapid and massive concentration of assets in the hands of a few managers. The top 5 managers have increased the size of their holding eight-fold in less than 20 years-- from $3 trillion to $24 trillion. It is hard to disentangle how much of these amounts is invested in equities (much of it is fixed income instruments) but the trend undoubtedly applies to listed equities. The size of these major asset managers means that they not only play a key role translating demand signals from investors, but they also shape such demand through innovation in their offerings.

A few very large sovereign wealth funds (SWFs) are another, overlapping force in the concentration of demand power over equity markets. But SWFs are a very heterogeneous group—ranging from the more transparent Norway GPFG and Temasek to the opaquer ones from some Gulf countries—and invest in an array of assets classes wider than that of the top managers in the chart.

The growing indexation of fund-based investment which has been an integral part of this dynamic has significant implications bound to change how stock markets behave in the future through two mechanisms: one is the automaticity, as fund managers are committed to maintain the promised composition, they all operate through mechanical buy and sell decisions in a herd-like behavior; the other is the acceleration of “fads” driven by demand as well as by other stakeholder influences. These fads may be very sensible ones but when they get caught (such as the latest example emphasizing ESG criteria) into a mechanical management process they can also have unintended, even perverse, effects.

The flip side of the increased intermediation of equity investments through funds is the reduction in the role of the traditional ”stock picking” by individual investors. This was a stabilizing factor as individual investors had tended to not be active traders. The current situation, though, is one where the role of individual investors has been reduced –and their impact on stability appears to be in reversal: low-costs transaction and social media have resulted in the emergence of a sort of high-frequency, crowd investment dynamic that is adding to stock market volatility (such as in the recent examples of GameStop and Hertz).

Low-costs transaction and social media have resulted in the emergence of a sort of high-frequency, crowd investment dynamic that is adding to stock market volatility

One important aspect of this dynamic--deserving to be addressed in a separate note--is that the increase in the value of equities has accrued disproportionately to a small number of households (the famous 1% as well as the top 10%) reflecting—and compounding—the growing inequality that most countries have seen during this same period both in income and wealth. One manifestation of that is the growth in the size of portfolios of “family offices” (FOs) as the size of the wealth in the hands of billionaires continues to grow very rapidly. Data for these semi-institutional investors are slippery but their number is estimated to be quickly approaching 10,000 and the size of their listed equity investments to already exceed $2 trillion—besides which FOs are major participants in private equity and other non-listed asset classes.

The expansion of institutional, transparent markets for equity securities has many positive benefits for the global economy—and for enterprises of all kinds as they seek appropriate financing methods. They have proven to be a valuable, flexible resource as companies (in the travel industry, for instance) have had to face massive, unexpected financing needs during the COVID pandemic. As with other aspects of globalization, the continued expansion of such markets cannot be counted on with certainty—as they are vulnerable to geopolitical tensions, regulatory divergence, and inter-governmental conflicts. Another major challenge they face—affecting both supply and demand sides of the market—concerns the potential for volatility (including through exceptional but explosive instances of manipulation) that high-frequency, low-cost, machine-driven and concentration of decision-making power entail. It all bears watching carefully.

The geopolitical challenges facing the European Union in 2022