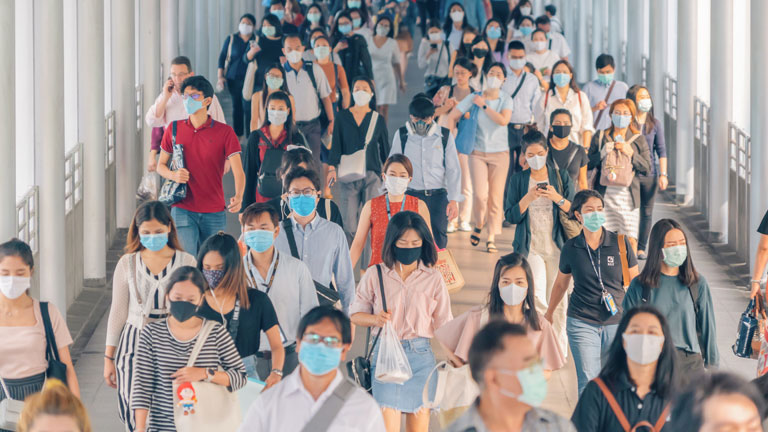 Scenarios of crisis and recovery

The world has since accelerated in many ways that make predicting the future even harder. But right now, we cannot even be sure of what the present is really like – much less the future. There is only one thing we can be sure about regarding predictions for the future: they will be wrong.

The International Monetary Fund (IMF) recently issued its traditional spring forecast for the world economy for this year and next. It doesn't have the luxury of equivocating (all it could do is hedge its prediction by warning of potentially more severe adverse effects), and so its widely-quoted prediction is that in 2020 global output will decline by 3% (the only time when something worse than that happened was in the 1930s) and then recover by 5.8% in 2021.

If we can be sure that it will be wrong – both for 2020 and 2021 – then what alternative is there for thinking about and preparing for the future?

The alternative is to think about the future sceptically and in plural, exploring different potential dynamics and outcomes through scenarios without getting stuck in the attribution of elusive probabilities. You can find an introduction to "normal times" scenarios in A taste of the future will help you navigate uncertainty, but these are no longer normal times, so it is worth taking a fresh look at scenarios for the near term.

The next few months will be critical in determining the options we face for 2021–22 and beyond, and so it makes sense to have a short-term focus on two axes of uncertainty about what the world will look like at the end of this year: how far and fast will the virus have advanced; and how decisive and effective will be the economic stimulus programmes.

Crossing these two axes reveals four stereotypical scenarios that the world could have to face in 2021.

Here are four labels and rough global-view sketches for each:

By the end of this year, the outcome of major uncertainties about the effects of the virus and the combined impact of the lockdown and economic stimulus will have become clear.

The implications are likely to be long-lasting in both social and economic terms but we cannot wait for a few months to see how things play out and then respond.  We need to prepare by "rehearsing" the response by our company or institution to different outcomes and identify future-resilient actions that we can take now.

The four scenarios sketched here can serve to set the stage for those rehearsals and help organise a search for resilient actions. Let’s start with the economic implications and differences across the scenarios – looking at the path from now through 2023.

The two extremes in this set of scenarios are the upbeat forward coalition and the gloomy defensive disarray. The situation for the first half of 2020 may not be very different in each scenario – with a significant drop in global GDP unlike anything the world has seen since the 1930s.

We already have a glimpse of that in the data from China (only for the first quarter) which shows GDP down almost 7% on the same period in 2019. The two paths diverge sharply after that. Yet they are both quite plausible – given the uncertainties we face as of this writing at the end of April 2020.

In the forward coalition scenario, the second half of 2020 still sees a slight decline of global GDP but a mild one

In forward coalition, the second half of 2020 still sees a slight decline in global GDP (reflecting the fact that some countries are already in recovery by the summer), and GDP growth resumes strongly everywhere from 2021. A renewed environment of international cooperation and a broad-based recovery of economic activity, trade and travel offer the promise that growth in 2022-23 will have settled at a pace slightly higher than that of the late 2010s.

In defensive disarray, GDP continues to decline for two more semesters: doing lasting damage to employment and activity in many sectors. The economy starts to grow hesitantly only in the second half of 2021 and settles after that at a pace well below the pre-2020 normal.

The implications of the differences between forward coalition and defensive disarray are enormous, will affect all markets, investments and the movement of goods, services and people. These two worlds will face dramatically different situations in 2021 and will continue to look very different in 2022-23 and beyond.

Fortuitous isolation and onerous strait both present us with significant declines in economic activity throughout 2020 (roughly in line with the IMF’s projection) but their paths differ after that.

Fortuitous isolation's lucky virus break makes the crisis shorter – growth resumes by early 2021 – but that good fortune has made it easy to stick to flawed policies, so that business and consumer confidence remain shaken, global productivity is low and the recovery is tepidly uneven. Growth settles in 2022-23 at a pace below the pre-2020 level.

Onerous strait allows us to explore a more drawn-out crisis but using a wide range of mutual aid mechanisms and recognising the need to improve international cooperation. Decisive, well-designed stimulus programmes that are well implemented pave the way for a robust recovery. The recovery finally arrives in mid-2021 – and offers the promise of a return by 2022-23 to a growth path at least in line with that of the late 2010s.

In the onerous strait scenario, decisive stimulus programmes pave the way for a robust recovery

These sketches draw very high-level, aggregate pictures of the global economy. Some parts of the world, of course, will be affected sooner or later and to a greater or lesser degree. But the implications of how events unfold in each scenario between 2020 and 2023 go well beyond economics and could change the world in many ways.

Nature of work and employment

In onerous strait, the long periods of confinement in the context of strong stimulus programmes and sound policies have provided individuals, companies and institutions with extensive, positive virtual work and "prosumer" experiences that change organisations during the recovery. New forms of job-sharing emerge, and small entrepreneurship is fostered.

In contrast, in defensive disarray, weak policies and ineffective stimuli have dismantled many industries, resulting in long-term unemployment for all generations, while cybersecurity failures have dented consumer confidence and led to backtracking in online activity.

In defensive disarray, weak policies and ineffective stimulus have dismantled many industries resulting in long-term unemployment

Positive experiences in cooperation (and evidence of the price to be paid by a lack of collaboration) during the crisis has created in forward coalition an environment of revived trust and created a foundation for agreements in various fields (including taxation, IP and climate change) that promise widespread and lasting benefits – reinforced by the election of Joe Biden.

In contrast, mistrust and external blame agitprop create unsurmountable hurdles for cooperation in defensive disarray and hinder progress on many fronts – including cross-border investment and innovation.

The segmentation of the world into political affinity blocks in fortuitous isolation has led to a quick re-shaping of supply chains, which have become much more regionalised and compartmentalised.

In onerous strait, the long disruption has fostered the accelerated re-invention of supply chains – they remain global but incorporate many more "intangible" links (such as trading blue prints for 3-D printing near the customer instead of shipping finished products, etc.).

Role of government and public services

The situation in onerous strait has forced the expansion of public services. Many governments have acquitted themselves well in the process and civil servants (especially in health, education and social services) have gained new respect and recognition.

In contrast, a lack of trust in all levels of government (and taxes) is a powerful feature in defensive disarray.

A major early symptom of the crisis and a sector that could be greatly affected by how the resolution unfolds. It will be stunted by the combination of economic crisis and lingering health concerns in defensive disarray.

The switch to all-virtual (and AR) in onerous strait together with the scars left by the prolonged health emergency make the recovery of travel – especially tourism and conventions – very gradual.

New travel patterns that reflect the block-segmentation of the world will affect both business and leisure travel in fortuitous isolation. Only in forward coalition, can we see from 2022 onwards, a strong recovery of travel to pre-2020 levels.

These are just a few glimpses of the different perspectives on the future that can be gained through these four scenarios. Many others – especially on the evolution of trade – are worth pursuing in greater detail in each scenario.

Hopefully, they also provide a demonstration of the power of scenarios to help navigate uncertainty and prepare our reactions in whatever future we may face (regardless of whether we like it, or consider it probable).