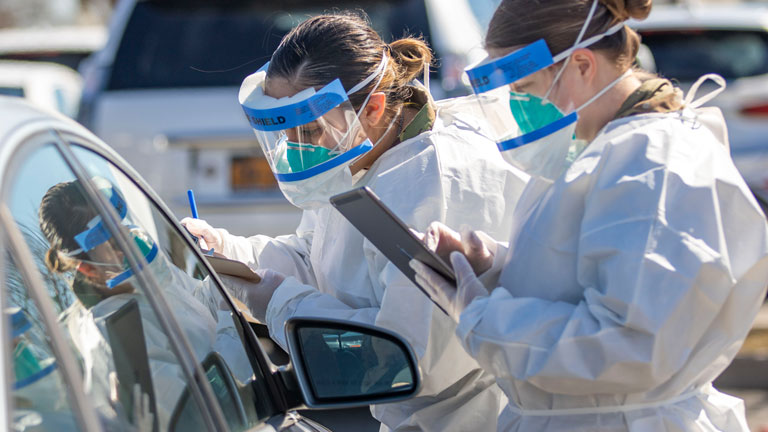 How to win against coronavirus? This is probably the most urgent question on the table of many governments around the world. The answer seems simple, but how it is implemented makes a huge difference.

There is no cure for coronavirus yet, and maybe like the flu or the common cold, there will never be one. The only solution therefore is to stop it with firewalls. This implies isolation and here is where differences arise. These differences reflect, however, a common substrate: the differences in the granularity of information and the intervention.

Two extremes can be identified: Italy and Spain on one side – and Korea, China and Singapore on the other.

In one case, the intervention is at the population level: everybody should stay at home, shops are closed and nobody is in the street. In the other case, we also see interventions at population level – but most of the focus is at individual level. Individuals suspected of being Covid-19 transmitters are isolated and their confinement is enforced.

In South Korea, confinement is enforced by geolocation

In Korea, a pretty simple app was put into place very quickly. The Korean Center for Disease Control and Prevention issued guidelines ordering anybody who came into “contact” with a Covid-19 case to begin a mandatory two-week self-quarantine.

The definition of “contact” is anybody who was within two metres of a confirmed case, or in the same room where a case coughed. The quarantine implied a strict separation from everybody, including family members.

Confinement is enforced by geolocation and infected citizens are asked to provide daily feedback on their condition, such as fever. In case of infringement, an alert is sent to both the case officer and the subject.

This method was highly effective because of the efficient testing done in drive-through coronavirus testing stations – in addition to testing in hospitals. Both methods allowed the Korean government to quickly create a big database of infected people with close to 200K tests.

China followed a similar approach, however, with a more sophisticated app that was supported by a larger number of on-site measures, such as checking the temperature of critical individuals. Also, the user interface was simpler and more reactive to users, with a traffic-light scheme of red, orange and green when accessing areas potentially contaminated by the virus.

Again, geolocalisation was used to enforce the app. The main difference is probably scale. Instead of targeting infected individuals, the Chinese app was directed to large populations.

We find the same pattern in both cases. The administration has a digital infrastructure that is able to gather information from the whole of the infected population, advise on and orientate behaviours, aggregate this information and provide a complete picture of the situation instantly.

The apps create a link among citizens, a sense of closeness, a way to ask for help and an expression of digital citizenship in the 21st century

But not only that! The apps also create a link among citizens, a sense of closeness, a way to ask for help and, in fact, an expression of digital citizenship in the 21st century – a century dominated by social networks. This is a particularly important aspect of digital platforms, governments at one click.

In both China and South Korea, the use of digital platforms is widespread. In particular, in China they are completely embedded in Chinese life; it is certainly difficult to live in Beijing, Shanghai, Shenzhen… without WeChat Pay and Alipay. The government also uses them regularly, and the most famous case is probably the social credit experiments that aim to shape the behaviour of Chinese citizens using a set of rewards and penalties through points.

Digital platforms provide governments with much more than the ability of direct interventions at citizen level: they provide an increased granularity and a sense of community and citizenship. They provide data, accurate data!

In fact, the coronavirus pandemic has been known since 30 December, when two American companies, Blue-Dot and Metabiota, alerted of a particularly dangerous focus of pneumonia in Wuhan (China). Both companies scrapped the internet looking for health news around the world, prioritising potentially dangerous cases.

In many ways, their capacity for early prediction is scary. For example, Metabiota predicted that on 3 March there would be 127,000 cases of Covid-19 around the world. This was only 30,000 more than the ones eventually detected (however, within the error margin). Nevertheless, we must take into account that we only detected a fraction of the actual cases.

Metabiota predicted that on 3 March there would be 127,000 cases of Covid-19 around the world

However reliable, these systems lose exactitude once the epidemic advances because there is an increasing need for more accurate data. Many governments don’t publish detailed data, or even accurate data, as the epidemic transcends health and becomes political.

Data are the bricks of any policy; data brings accuracy, and with this accuracy, the possibility of inflicting the least damage while obtaining the most benefit.

Data is not coming only from sensoring citizens, or their active involvement in data capture, but also from cameras and robots. This has been the case in China where the first movement was retrofitting existing cameras in open spaces, in the street, in police helmets, in airports, or in the mobile robots that we encounter everywhere, with infrared sensors able to measure temperature. These are intelligent cameras that perform face recognition and are able to uniquely identify citizens, increasing therefore the size of the database.

Those nations without a digital infrastructure, such as Italy or Spain, have to resort to the population level approaches of confinement

All this raises many questions about privacy, data sovereignty and ethics. The treatment of data is certainly different in South Korea, China, or Singapore, and so is the enforcement in preserving privacy and anonymity. Therefore, we have some evidence that these infrastructures can be accommodated to the diversity of standards in privacy that exist around the world.

What is important to point out is that it is not learning, or cultural aspects – certainly varying between China, South Korea or Singapore – that make the difference, but the existence of a digital infrastructure with which the administration can establish a dialogue with citizens.

If we contrast the efficiency of these countries with those that lack a digital infrastructure, such as Italy or Spain, and which have to resort to the population-level approaches of confinement – of disputable effectiveness – then the comparison is striking. While I am writing this article, Italy reached 3,000 deaths! Spain is poised to follow the same path.

However, digital infrastructure is not only for the contention of epidemics. A close administration is no longer one that is nearby, and this is a lesson that this pandemic teaches us fully, but one that is accessible at one click distance and at the speed and easiness of the internet.

While in companies we live in a time where everything is an API that lets companies communicate and interact seemingly blurring their boundaries, in the public sector in most countries this is still no more than a chimera, an illusion, or a dream.

The coronavirus crisis is a test and an opportunity for improvement and change. There are many areas that can benefit from it – from international cooperation to global innovation, the use of data for innovation, global testing… many.

However, there is one that stands out from many others, the urgent need to set up digital infrastructures for governance in countries. It’s not only about efficiency or updating public administration and citizenship to mechanisms more akin to the 21st century. For many, it’s now a matter of life or death.