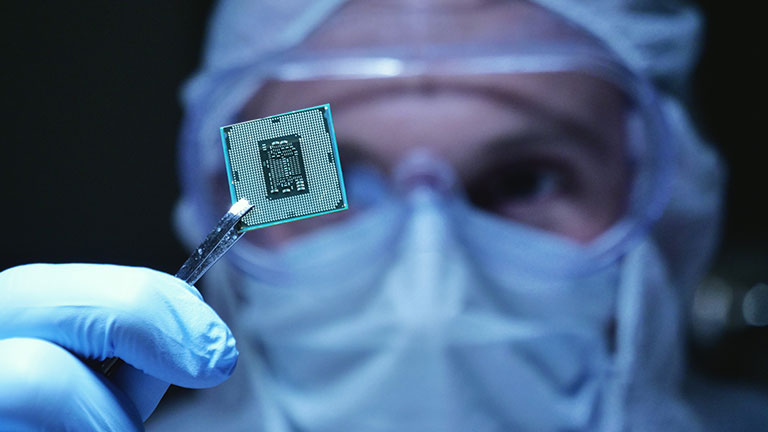 The rapid spread of technologies is one of the characteristics features of the world today. They have become pervasive in our daily life — at leisure and at work. They have become a source of competitive advantage (or, rather, a threat of competitive disadvantage) for business and are part of our identity as individuals and social collectives. And there is potentially much more yet to come with many potential implications. One such implication (not necessarily evident to the final user) is the dependency that many of these technologies are creating on a common set of inputs — both natural resources and man-made ones. Two examples serve to illustrate this dynamic: rare earth elements and integrated circuit chips.

“Rare earth” refers to a group of chemical elements that occur in nature, though not in pure metal form. Rare Earth Elements (REE) and their alloys have become critical raw materials for modern technology. Applications range from digital devices such as computers and mobile phones, to energy (LED lighting, wind turbines), to medical ones (like magnetic resonance imagery), to transportation (electric vehicles incorporate about 1Kg of REE per vehicle) and much more. They are called “rare” for an obvious reason: they are scarcely available.

As their usage continues to spread — becoming critical to more and more products and activities — the location of REE reserves could well be the source of political and market power. And REE are not just scarce but known reserves are also concentrated in a few countries: eighty percent of the reserves are estimated to be located in just four countries: China, Vietnam, Brazil and Russia. 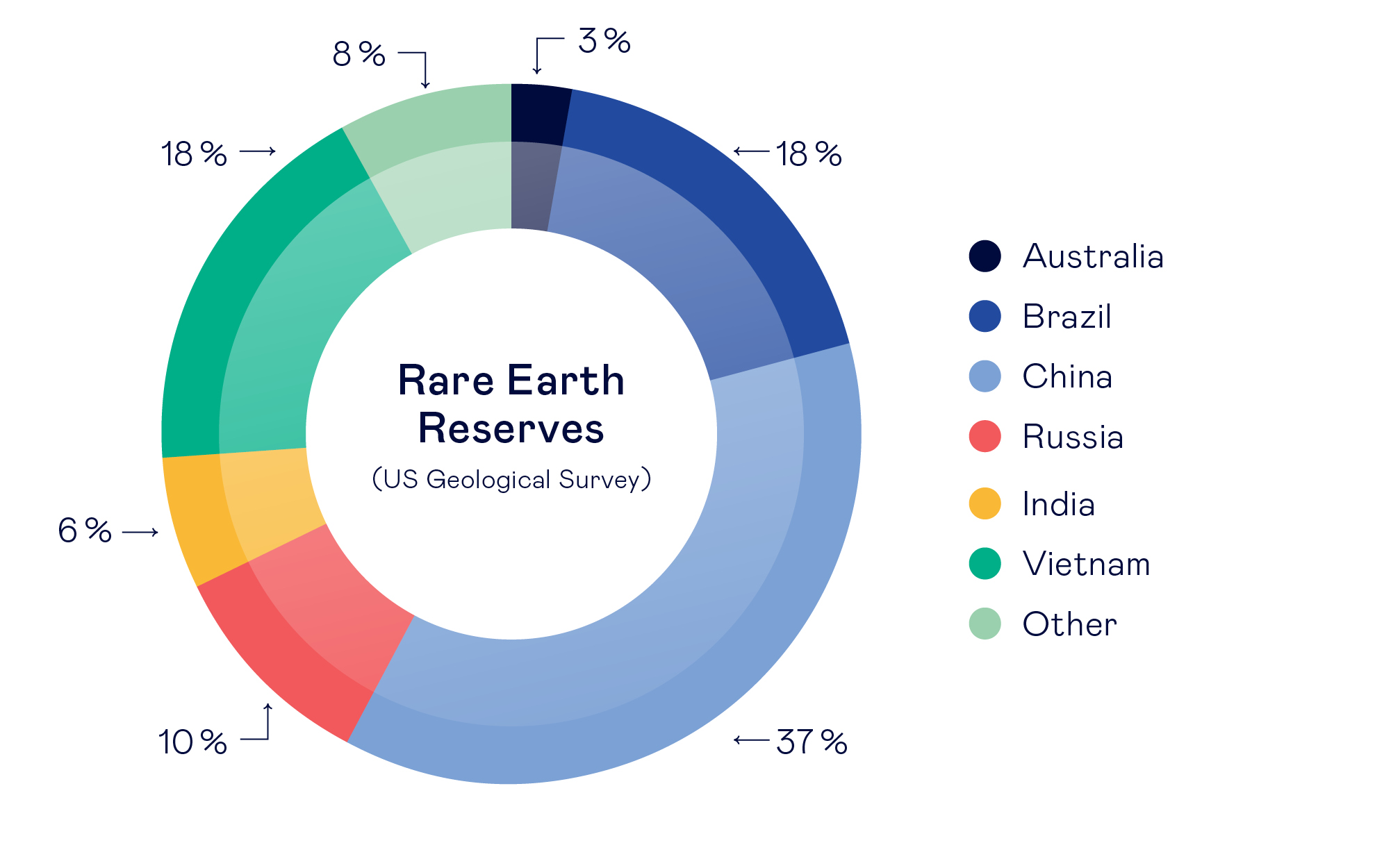 Besides REE there are a few other elements that are becoming critical inputs for technological advance and they are also found concentrated in a few places. Lithium is an example of a raw material with pervasive uses and 70 percent is mined in just two countries: Chile and Australia. A broader categorization of critical raw materials shows the importance of China as a producer—with close to half of the supply coming from that country and the other significant producers accounting for well under one-tenth each. 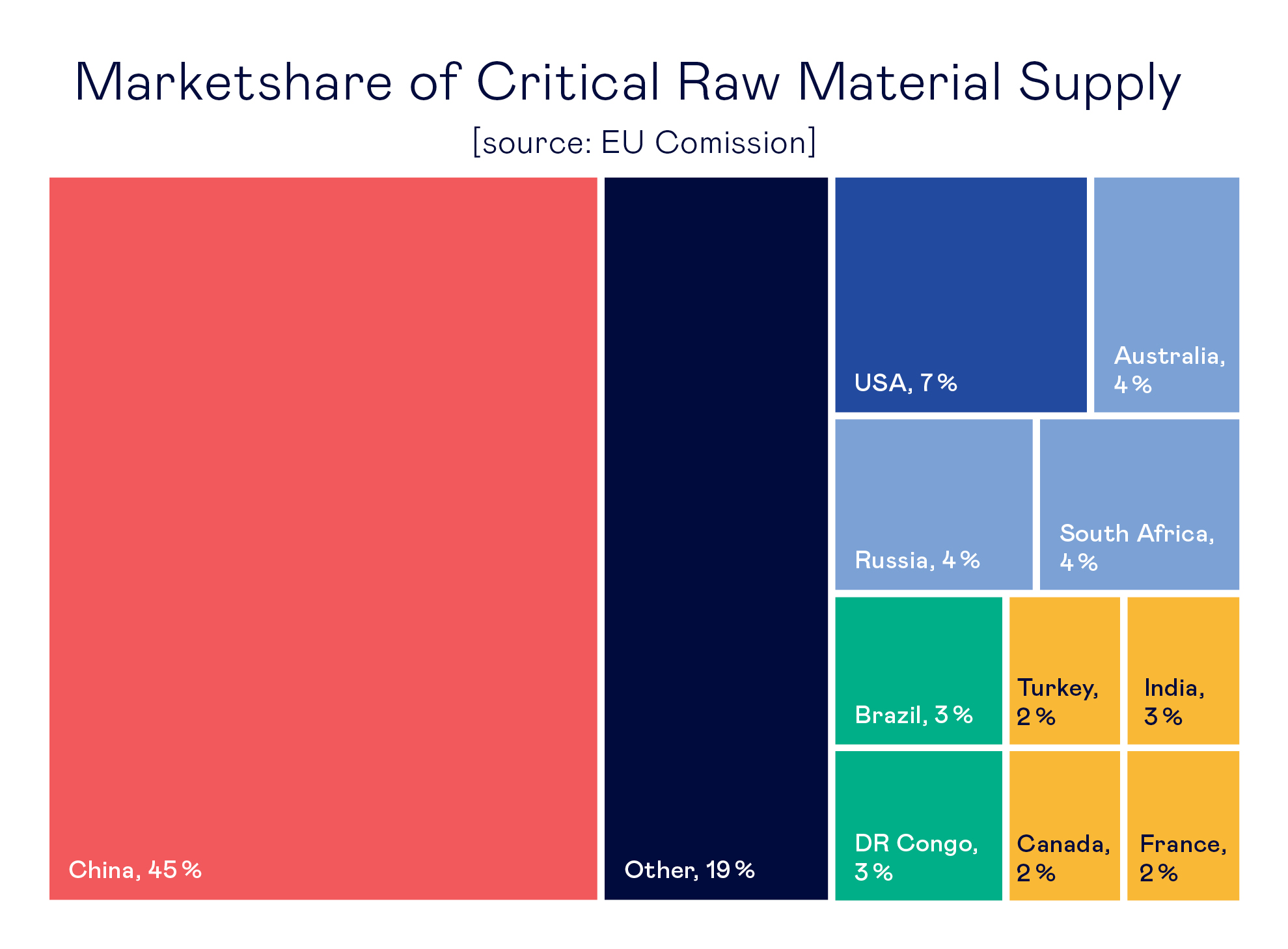 Chips are receiving a lot of attention recently, as shortages are causing stoppages in some manufacturing lines (notably automobiles) and forcing the temporary “dumbing down” of household appliances that had become increasingly loaded with electronics. The shortages are due to the inability of supply for the silicon wafers on which the integrated circuits chips ride to expand in the short-term, especially when production facilities are already stretched. US sanctions and other manifestations of China-US tension have exacerbated the situation by interfering with the market’s response. 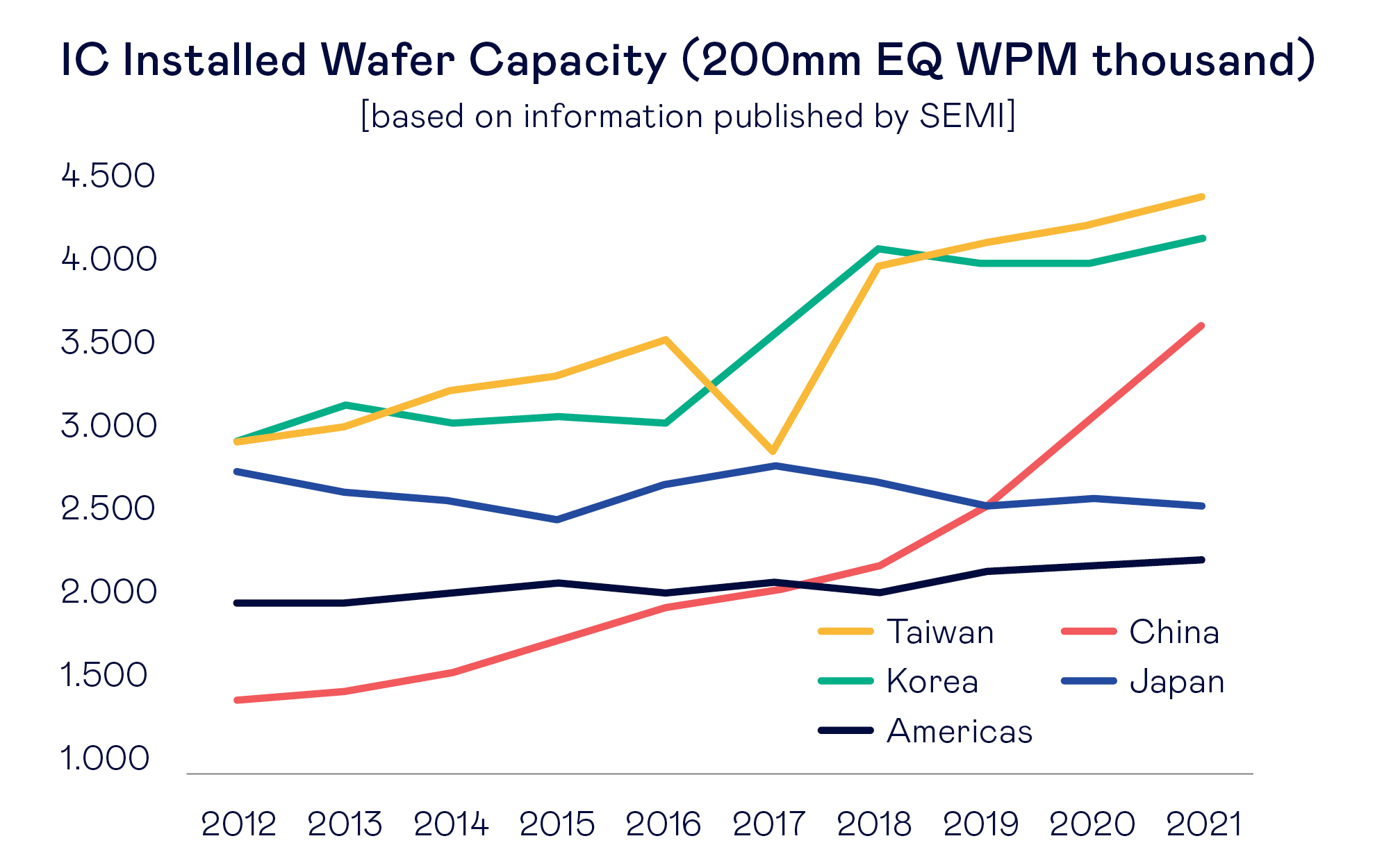 The recent history of IC wafer “foundry” or fabrication capacity has two features with logistical and potentially geopolitical implications: the consolidation of the leading position of Taiwan and Korea and the rise (in yet another dimension) of China. Taiwan and Korea—whose economies represent about 2.5% of the world’s — account for about half of chip fabrication capacity. Depending on the measure used Taiwan or Korea is the global leader but it is clear that they are both major producers and they have made investments to ensure that their high-quality capacity keeps growing.

China, as a location, has more than doubled its share of global chip production over the last decade and it is interesting to note that as its fabrication capacity has increased the component represented by Chinese companies (about 60%) has not increased (the remaining 40% is the result of investments by international companies—mostly from the US). How long this will remain the case (when will Chinese companies start increasing their share?) is something worth watching and could have significant repercussions.

China, as a location, has more than doubled its share of global chip production over the last decade

The two largest components of demand for chips are computers and communications devices; together with other consumer electronics they account for three-quarters of the global demand. Industrial demand (including, importantly, automotive as well as the many other artificial intelligence applications) is growing very rapidly. But what explains the demand side of the shortage of chips is the impact of the lockdowns and other measures taken in response to the COVID-19 pandemic.

The first wave involved people buying computers, monitors and other devices for working remotely or going to school virtually. Sales of PCs that had been stagnating or declining for years increased by almost 5% in 2020—the most since 2010. Then sales of all kinds of home entertainment gadgets like game consoles, TV screens and tablets took off. All these devices include many chips — not just the central processor but also little chips for controlling the display, managing power, or operating modems.

The geographical concentration of chip fabrication capacity is not due to natural resources—far from it (the silicon that wafers are made is abundant worldwide). It has resulted from a major shift in the semiconductor industry driven by pressures for specialization, reliability and scale that have led to major waves of outsourcing the production of chips to semiconductor contract companies that have pure IC wafer production capabilities (as opposed to integrated capabilities such as those of Intel, for instance). 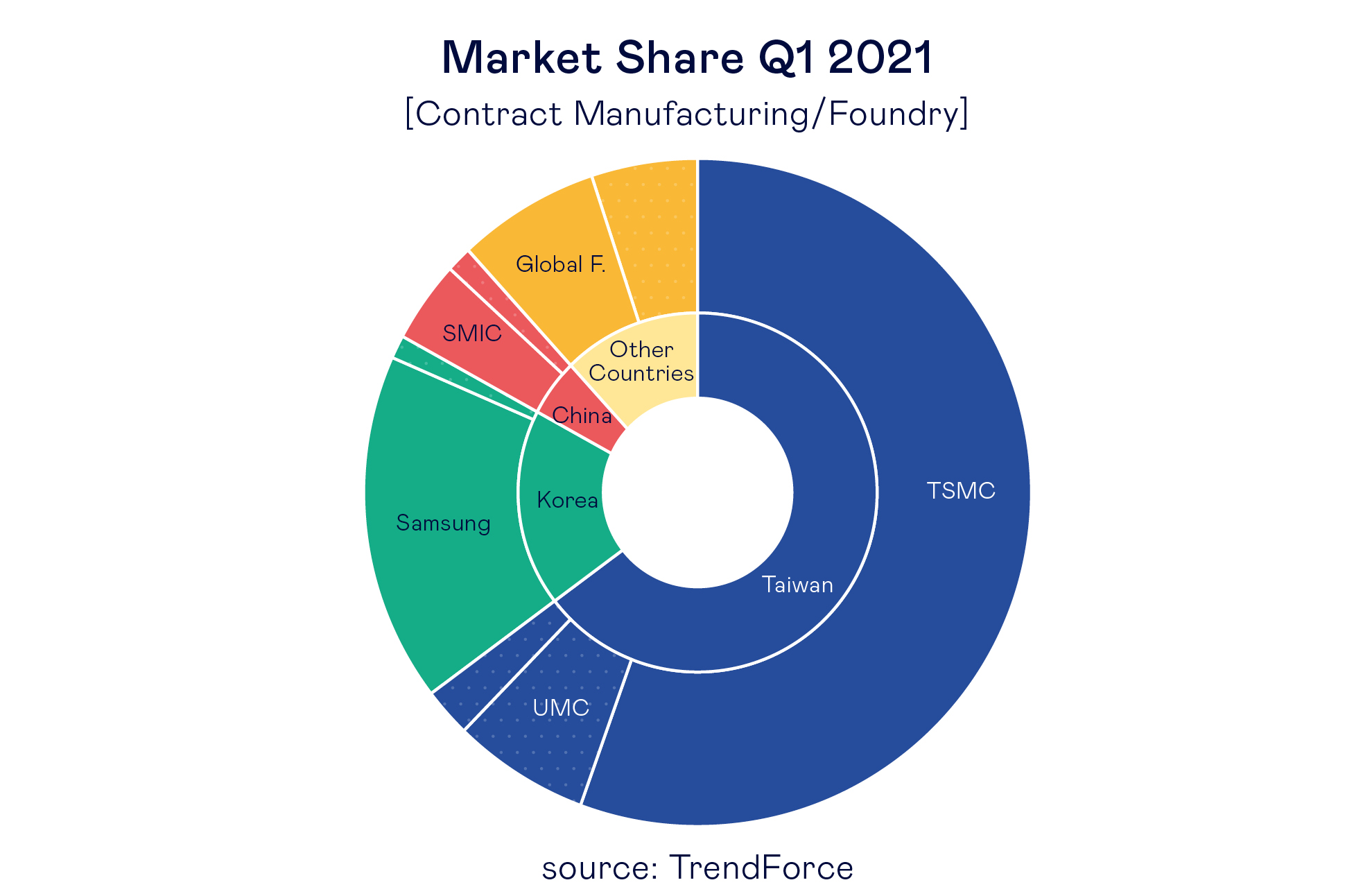 Taiwan’s Semiconductor Manufacturing Company (TSMC) has been a major beneficiary of this trend—and it has also reinforced it through its prowess. The current situation is one of astonishing market dominance: it accounts for 56% of the revenue of contract semiconductor manufacturers. Samsung is also a very major producer, though market share statistics tend to underestimate its role because it produces chips also for own use—unlike TSMC.

The centrality of TSMC in the supply chains of many producers of electronics of a wide range of complexity is also remarkable. Its clients (some of them relying on the company exclusively) include notably Apple which accounts for one-quarter of TSMC’s revenue. And, as the current shortage of chips as evidenced, the Taiwanese manufacturer is a major supplier—directly and indirectly of virtually all major automobile manufacturers.

Although precise information is not available, it is also generally assumed that TSMC chips are part of the supply chain for defense and national security suppliers in many countries—adding to the major economic significance of its commercial position an additional dimension of great sensitivity. The chip shortage is not expected to be relieved until well into 2022 and the prospects for TSMC’s market position to be eroded and of Taiwan’s and Korea’s locational preeminence in production to be replaced with a more distributed capabilities will take many years—even if determined policy actions and investments are spurred by considerations of national security and supply chain resilience. While supply response is limited in the short-to-medium-term, over the longer terms it could be that the current shortage and the dependency alarm it has generated could result in geographical diversification by TMSC and Samsung geographical diversification by TMSC and Samsung and even a wave of innovation by companies other than the current market leaders.

Counterbalancing the geopolitical and logistical vulnerabilities of the current situation is the fact that the level of specialization and scale that has been achieved in recent years as produced great efficiency and has driven rapid productive innovation. But, as Boston Consulting Group’s analysis suggests, the concentration and interdependence of semiconductors in global supply chains means that there are more than 50 significant points where a single region accounts for 65% or more of the total global supply—hence, potential bottlenecks and sources of logistical and geopolitical vulnerability.

The convergence, as technology adoption keeps growing of the dependence on natural resources, such as REEs, and on man-made competitive advantages in chip production means that there are many potential “tipping points” which could disrupt supply of products and services that we increasingly consider key to daily activity—for business and home alike. These range from geopolitical tensions to natural catastrophes to terrorist transport disruption—and more. The pervasiveness of these vulnerabilities means that virtually no enterprise is excepted from them and that their evolution needs to be part of corporate (and national) strategic radars and early warning systems.