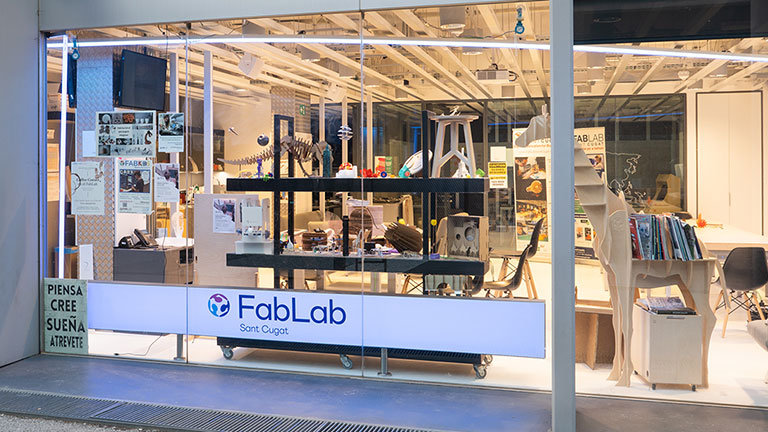 The FabLab is an innovative space at Esade's Rambla of Innovation where anyone can turn their ideas into tangible objects through design software and digital manufacturing machines. Students, entrepreneurs and technology enthusiasts can try the do-it-yourself approach to boost their creativity – and make their tech projects come true.

We sat down with Mat Laverne, founder of Esade's FabLab, to talk about creativity, innovation, and entrepreneurship.

Do Better: Creativity is an important skill for entrepreneurs. Does the current educational system properly address it?

Mat Laverne: Our current education system is an evolution of a system that was designed to prepare youth for a lifetime of repetitive tasks. Work conditions have changed in many ways, but education lags behind in its ability to prepare our youth for modern life.

Learning to learn, the capacity to adapt to a fast-changing world, and many soft skills are far more important than the ability to regurgitate a list of facts imposed by the system. Borrowing from the words of Ken Robinson: "Creativity now is as important in education as literacy, and we should treat it with the same status."

Robinson believed that much of the present education system in the United States encourages conformity, compliance, and standardisation – rather than creative approaches to learning. Robinson emphasised that we can only succeed if we recognise that education is an organic rather than mechanical system. Successful school administration is a matter of creating a helpful climate rather than "command and control."

Creativity and innovation can be learnt – but practice is essential. Why?

Confucius reminds us of the importance of practicing: "I hear and I forget, I see and I remember, I do and I understand." With hands-on practice the student constructs her own understanding of the concept, something much more powerful than memorised words.

While you do something, you have the opportunity to get it wrong, and errors are some of the best learning experiences.

Confucius reminds us of the importance of practicing: 'I hear and I forget, I see and I remember, I do and I understand'

The product of innovation and creativity is the fruit of your own imagination, so by definition it must be put into practice to bear its fruits.

How do you help participants at the FabLab learn to create and make new things?

At the FabLab we give access to tools and we teach students how to best use these tools (machines and software) to design and create. These tools extend their capacity to make things, but what they make depends on their imagination.

Every day, technology plays a greater role in our society and offers new possibilities to solve problems. We are familiar with it as users, but not as creators. Why is it important to change that?

In recent years, technology has become more accessible to more people. These technologies give us powers we never had in the past. These tools empower everyone to do great things, things that could change the world and make an impact on society. Thanks to these tools we can be more than passive onlookers watching history unfold.

The potential of the new technologies of digital fabrication is tremendous. Ideas can be transformed into tangible solutions. We have seen prosthesis made accessible to people who could never have afforded traditional ones thanks to 3D printing. Medical devices have been created by very large communities in an incredibly fast response to the Covid crisis, and FabLabs have been placed inside refugee camps to make them more resilient.

New technologies give us powers we never had in the past

At the FabLab, you’ve developed some projects with students and teenagers like the TDR projects and the Makers Challenge. What are their objectives?

The local education system has recently been offering new opportunities for high school students to learn more proactively. One such opportunity in Catalonia is the TDR research project in which students can participate during their final two years of high school. As we really want to support that learning experience, we offer an accompaniment to students that want to illustrate their ideas with a prototype. In this programme, we teach digital fabrication skills so that they can make their ideas tangible, and communication skills that will help them deliver their message loud and clear. We want the students to feel passionate about the projects they chose to investigate.

Another programme we have put together is the Maker-Challenge. It instils skills we deem essential – such as entrepreneurship or public speaking – that are essentially absent from the learning curriculum in most schools.

How did the participants receive them?

Both initiatives are bearing fruits. High school students from Sant Cugat and other neighbouring cities have been able to carry out amazing projects, some of which have received recognition.

Various projects from the different Maker Challenges have been awarded prizes at the Maker Faire Barcelona. These outstanding projects include Clean Street – a waste bin with a gaming twist. The concept is simple: to encourage dog owners to keep the streets free of excrements, Clean Street detects when dog waste is put in the bin and automatically rewards the dog with a treat. A win-win that improves the city experience for everyone. Crutch-Up is a set of crutches equipped with hands-free capacity: it enables users to use the phone and chat while walking with crutches (it also enables people to scroll through their music playlist without having to let go of their crutches). Another project is the Skater’s Helmet, a flexible helmet that enables skaters to skate more safely without losing their characteristic style.

One of our students, Cristina Grau, made a functional robotic arm. The project was awarded various prizes such as the Premi Sant Cugat 2018 and a prize for academic excellence from the European International School.

I particularly enjoy recounting Lluisa’s story because it touches in many ways the purpose of the FabLab in empowering people with the tools of digital fabrication. Lluisa Garcia attended the first session of our TdR accompaniment programme with little idea of what to expect. In that session we ask each student to share with the rest of the group their project idea. When Lluisa’s turn came, she said jokingly that as a musician with no one in her family able to accompany her when she played, the obvious thing she needed to create was a robot that could do just that. She immediately added that it was obviously a joke as she was clearly incapable of carrying out such a utopian project. I challenged her, giving her two weeks to make a simple Arduino project that could control the motion of a lever. It took her three days to proudly show me the motion of that first finger, and within a few weeks she already had ten fingers that she could program to move at will. After many prototypes struggling with code and added complexity, she had a robot that could play on all four octaves of her electric piano, and she had programmed a few of her favourite themes.

Unsurprisingly, she received the best possible grade for her project. That same year, ‘Wonder’, as she baptised her piano-playing robot, was showcased in an event promoting the best student projects in Catalonia – and she was awarded a prize.

Lluisa came to FabLab Sant Cugat with no clear ideas of what studies to pursue, and was defaulting towards liberal arts. After completing her project, she chose to major in engineering and appears to have found a new passion.