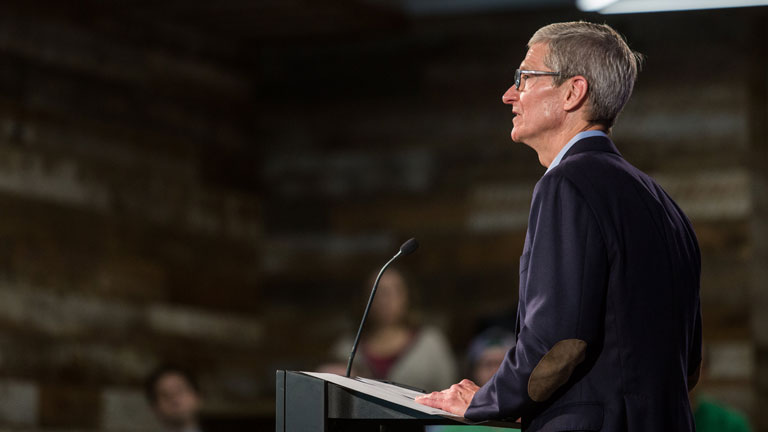 On Privacy Day, Apple’s CEO Tim Cook spoke at the Computers, Privacy, and Data Protection conference. He called for greater scrutiny of businesses that are built on data exploitation. Cook said that “an interconnected ecosystem of companies and data brokers, of purveyors of fake news and peddlers of division, of trackers and hucksters just looking to make a quick buck, is more present in our lives than it has ever been.”

His message is more than a simple platitude. Apple’s new operating system will require users to opt in to allow businesses to track their data and use it for personalised advertising. It’s a move that will hit social media companies, which rely heavily on such a model, particularly hard.

As the market leader, Facebook has been quick and fierce in its response, warning that small businesses will be hit hard if they’re not able to use targeted advertising.

In full-page ads in The New York Times, The Wall Street Journal, and The Washington Post, as well as on its own website, Facebook writes that “the average small business advertiser stands to see a cut of over 60% in their sales for every dollar they spend.”

How to interpret this claim?

In their article Facebook’s misleading campaign against Apple’s privacy policy, published on the Harvard Business Review website, Esade professor Bart de Langhe and his colleague Stefano Puntoni explain how to interpret this figure.

“To understand why this difference matters, imagine a company that knows its customers very well,” they continue. “It can predict with a high degree of accuracy how much a customer will spend in the coming month. If the company targets its advertisements to those customers who are expected to spend a lot, each dollar spent on advertising will be associated with high revenues. That’s great – the company has achieved a high return on ad spend.”

“But here’s the thing: These customers would have generated high revenues anyway. That’s why they were targeted in the first place. So it would be a mistake to conclude that these customers spent more because of the personalised ads.”

Facebook argues that Apple’s decision is especially damaging during this pandemic. The company refers to a study by Deloitte, which supposedly found that 44% of small to medium businesses started or increased their usage of personalised ads on social media during the pandemic. While the statistic used by Facebook might be vivid, the authors say it is hardly informative.

Facebook, it seems, cherry-picked the data that best supported its case – and the cherry wasn’t even good

In fact, the researchers argue such data says very little about how much businesses actually spent on digital advertising. “Even a relatively small increase in advertising expenditures (of say 5%) is likely to be spread over a large number of firms that increased their spending by some amount.”

Moreover, the same Deloitte study shows that 35% of businesses say they started using or increased their usage of non-personalised ads. “That number (35%) is not much lower than the one underlined by Facebook (44%),” write de Langhe and Puntoni, “suggesting there’s nothing special about personalised advertising in pandemic times.”

Facebook, it seems, cherry-picked the data that best supported its case – and the cherry wasn’t even good.

Standing up for small businesses

“In pointing this out, we don’t mean to dismiss the concerns that many small businesses have about the changes Apple is making to its privacy policy,” conclude de Langhe and Puntoni. “They’re real. Facebook says it wants to stand up for small businesses in the face of these changes, which it is perfectly entitled to do. But disinformation about advertising effectiveness isn’t the way to do that.”