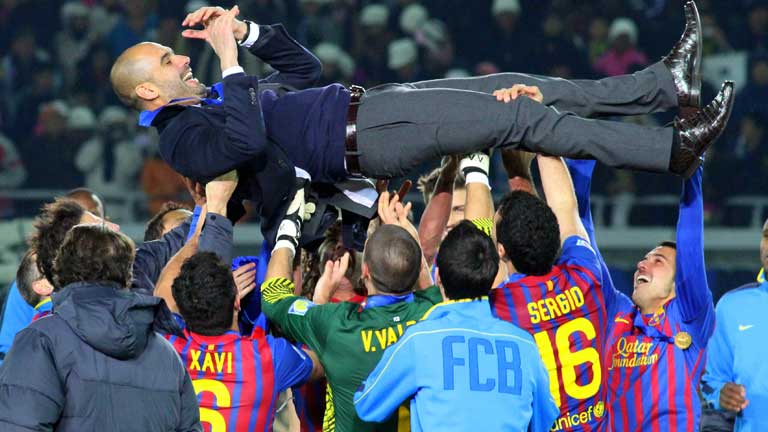 Article based on research by Xavier Busquets (Photo: Christopher Johnson)

Football fans remember Pep Guardiola’s FC Barcelona as one of the most competitive and pleasurable teams to watch in recent decades.

A new research paper applies network science to explain the particular style of the FC Barcelona coached by Guardiola – and how it helped the club become one of the best in the world.

Published in Scientific reports, the research is a collaboration between Esade Associate Professor Xavier Busquets, together with Javier Martín Buldú, Juan Carlos Carretero and Ignacio Echegoyen from the Center for Biomedical Technology, as well as Francisco Seirul·lo, one of the key individuals responsible for changing the mindset at FC Barcelona.

Researchers considered players as network nodes with the ball providing the connections between these nodes. This approach enabled the researchers to see the organisation of the team on the field and the "structures" it created, in the same way that scientists look for patterns in any type of network to better understand its secrets.

The researchers analysed each 50-pass combination made by the team during every match played in the 2009/2010 season – probably the best season of Guardiola’s period and when six major titles were won (Spanish Super Cup, UEFA Super Cup, FIFA Club World Cup, Copa del Rey, LaLiga and the UEFA Champions League).

Results show that the network drawn by FC Barcelona’s passing players was wider than the networks of its rivals in LaLiga (the top Spanish football league). Moreover, the Barcelona network focused most of its activity in its rival’s half of the field: and so was closer to scoring and farther from its own goalkeeper.

The team did not depend on a star player, but on a shared leadership network that was organised dynamically according to the phase of the game

"The aim of this style of play is to create passing options that systematically generate superiority," says Busquets. "The FCB players were more dispersed than its rivals and the rate of advance was faster – which systematically creates advantageous situations."

When passing networks are constructed as a simple addition of all the passes made between players during a match, statistically significant differences between the FCB passing networks and its rivals can be seen – and these reveal the benefits of Barcelona’s style of play.

"Barcelona’s style offers a greater local resilience when the ball is lost (due to greater clustering), fewer steps to connect any two players (due to shorter paths) and a greater connectivity amongst the whole team," says Busquets.

The analysis of FC Barcelona’s style did not just focus on the distribution of players and how they connect when passing the ball. It also analysed how these patterns change during a match. This highlighted some of the particular features of Guardiola’s game, such as the fact that FCB was usually the first team to synchronise a network of 50 passes (since Barcelona tried to play in the rival’s half of the field), and that the risk of FCB conceding a goal increased when the team interrupted its network passing style.

Guardiola’s "signature" style meant that the team had one of the best shared leaderships in footballing history. Xavi, Iniesta, Messi, Puyol and Busquets were the most active "nodes" in the network, and acted as dynamic passing "hubs" (being the players with the greatest centrality).

The paper highlights the existence of a shared leadership in the various situational areas and phases of the game. "The other players followed the game that was played by these leaders in a coordinated manner. The degree of connectivity reveals that the team did not depend on a star player, but on a shared leadership network that was organised dynamically according to the phase of the game," says Busquets.

"A game model with these characteristics is not random, but the result of the creation of a school. New players adapted to the game style and learned not to organise in static lines of defence, midfield and attack – but in a dynamic configuration around the ball with two game phases: play the ball or recover the ball," he adds.

The findings offer a novel approach by employing network science to analyse a subject that is usually seen from a more passionate perspective. "In human games, all teams learn, develop and evolve. We will continue with this research by working on new lines. There is much to learn and much knowledge to generate about this fascinating game."