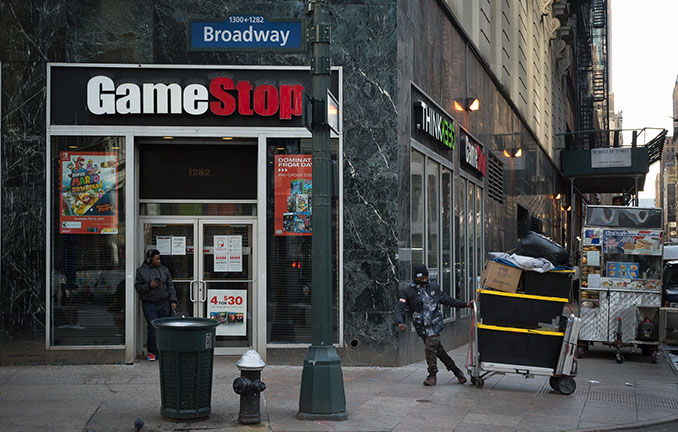 Of markets and memes: What the GameStop case teaches us about the power and politics of online communities

On Super Bowl Sunday, a major event in the US not just for sports but for companies looking to reach massive audiences, a five-second advertisement for Reddit briefly flashed on millions of screens around the world. It was in the format of a Reddit post entitled, “Wow, this actually worked.” The post continues, “If you’re reading this, it means our bet paid off”, referring to the GameStop bet that has gripped the financial world, launching the stock to soar up to an unbelievable all-time high of $483 in January all the way from $4 a year ago.

This historic short squeeze was made possible by the subreddit r/wallstreetbets, a speculative forum to discuss high-risk investment picks, when Redditors took on the hedge fund Melvin Capital, which held a short position on the stock and eventually lost over 50% of its investments.

While many financial analysts have weighed in on the GameStop case, providing insight to the movement of the market, much more is to be understood about the online community, which now has almost 9 million members called “degenerates”, that made it happen.

Reddit’s Super Bowl flash advertisement ended with, “Powerful things happen when people rally around something they really care about. And there’s a place for that. It’s called Reddit.” The statement encapsulates the pride of online communities such as Reddit in being a space for shared interests but also their capacity to organise around these. In the case of r/wallstreetbets, what people had rallied around was taking down Wall Street, which many Redditors see as a symbol of corporate greed and the 2008 financial crisis. Scrolling through the subreddit, one quickly gets a feel of the frustration and anger that has fueled the movement.

Scrolling through the subreddit, one quickly gets a feel of the frustration and anger that has fueled the movement

Alongside screenshots of their GameStop investments, some Redditors share stories of growing up poor or losing jobs and homes back in 2008. Those who’ve sold their stock have used their gains (referred to as “tendies”, short for chicken tenders) for various purposes: paying off medical debt and student loans, donating to children’s hospitals or buying billboards across the US to proclaim victory for the movement.

Many of these posts have gone viral outside of Reddit, being shared across social media and making news headlines. The “Us vs Them” narrative is palpable and visceral, and each development in the GameStop case so far (the trading app Robinhood imposing restrictions, lawmakers like Alexandria Ocasio-Cortez and Ted Cruz and the SEC getting involved, and a Hollywood movie deal in the works, to name a few) only strengthens this.

Despite its populist sentiment sustaining the online community’s momentum, the politics of r/wallstreetbets remain difficult to pin down. On one hand, these self-proclaimed degenerates target the elite as represented by Wall Street, but on the other hand, worship controversial elite figures such as Elon Musk and Martin Shkreli, whose business acumen can’t be decoupled from their trolling and memelord status (the former tweeted “Gamestonk!!” with a link to the subreddit, while the latter was once a moderator of the subreddit).

Herein lies the paradox at the heart of the GameStop story: In resisting one thing, r/wallstreetbets has replicated power structures of oppression and adapted these to the digital space it occupies. The subreddit is laced with profanity and slurs, with fellow Redditors referring to each other as apes, autists, and retards (conveniently an anagram for “traders”). Its respective server on Discord, a group chat service, was banned for community guideline violations, which include “hate speech, glorifying violence, and spreading misinformation,” according to the company’s statement.

Moderators of the subreddit have pointed out that such behaviour does not represent the whole group, but the widespread abuse and racism depict a dark reality behind these online communities—a reality that can easily be exported beyond the Internet.

Although the intentions and politics of these Redditors are not homogenous, they have managed to collectively bring on a reckoning of financial institutions. Whether or not online communities such as r/wallstreetbets stop at financial institutions is anyone’s guess at this point, and the uncertainty of this is a chilling thought.

In 2021, one can no longer deny the real social, political and economic implications of online movements, as we’ve seen with #MeToo, QAnon and now GameStop. While they can look vastly different from each other in terms of their underlying principles and tactics, which evolve as these communities grow, their capacity to organise and challenge institutions head-on must not be taken for granted. The GameStop case serves as a surreal reminder that online uprisings wield the power to create a wide range of results that have consequences for markets and democracies. While it is too early to tell how this movement will unfold or end, one thing seems to be certain: There will be memes.